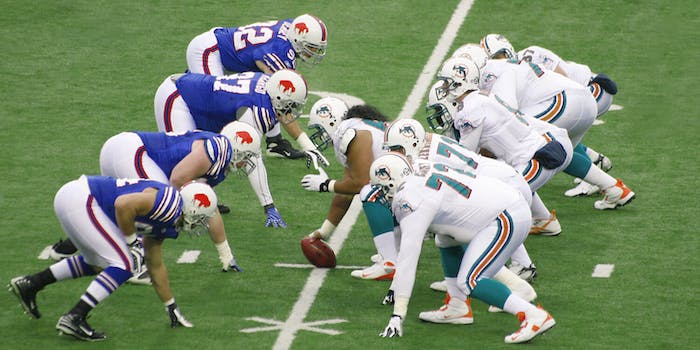 How to stream Bills vs. Dolphins in Week 7

Buffalo will look to extend their strong start against the woeful (and winless) Dolphins.

The Miami Dolphins squandered their best chance to win a game this season, and the Buffalo Bills certainly aren’t about to let them make up for the lost opportunity.

In a battle of NFL bottom feeders, the Miami Dolphins came up short against an equally woeful Washington Redskins team last week. The Fins finally yanked Josh Rosen after an awful start to the game and veteran journeyman Ryan Fitzpatrick almost staged a comeback. Almost.

Don’t look for any almosts this week, as the Dolphins head north to face a dominant Bills defense rested from their bye week. It’s hard to quantify how bad Miami has been, but here’s a start. Miami is averaging 8.4 points per game. Josh Rosen has thrown five picks and one touchdown so far this year. The team is averaging only one sack per game.

Meanwhile, the Bills’ Jordan Phillips had three sacks by himself in the first half of their game against the Titans.

The Bills defense went into its bye week ranked third in defensive DVOA. Buffalo’s secondary is one of the best units in the NFL. Going into the bye, it was fourth in the NFL in completion percentage allowed (57.4) and second in average yards per attempt (5.4). The Titans failed to convert their first seven third downs against Buffalo.

On offense, it’s a different story. Josh Allen has been serviceable at best, the kind of quarterback who plays to let his defense win games. While Frank Gore’s continued performance at running back is a great story, he is past his prime, and can’t carry an offense by himself.

Buffalo has only had to put up more than 21 points once, but it has worked so far.

It’s likely that this Bills team will come back to Earth some week soon. Decent quarterback play coupled with lights out defensive stands is a hard combination to pull off week in and week out in the modern, pass-happy NFL.

Of course, that likely won’t an issue this week, as Miami should help the Bills make it look easy.

There are a number of options for watching Bills vs. Dolphins on streaming platforms that carry CBS. However, consult a coverage map to see what game your regional channel will be playing.

Bills vs. Dolphins live stream: How to watch NFL online

If you’d like to watch live NFL games directly from your PS4, PlayStation Vue is your best bet. PlayStation also works with streaming devices like Roku and Amazon Fire products, but what separates PlayStation from the rest of the streaming services is that it’s also compatible with Kodi. No matter how you stream the NFL, you’ll get to choose from four tiers of channels—all but the cheapest include NFL Network. From there, you can also add NFL RedZone as part of the $10-per-month Sports Pack, which also unlocks ESPN Bases Loaded, ESPN Classic, Longhorn Network, Outside TV, and NBCUniversal regional sports networks. You can see the full list of PlayStation Vue channels here. Two other great perks: You can stream on up to five devices at once, and there’s also unlimited cloud DVR.

There are two—and only two—ways of acquiring NFL Sunday Ticket without DirecTV. There’s NFLSundayTicket.TV, which costs $73.99 per month for four months. It’s everything you love about NFL Sunday Ticket, but it’s online. You can stream from pretty much any device that connects to the internet (but only on one device at a time).

Frank Gore, Running Back: Against the Dolphins, you may be tempted to start some Bills receivers, but neither John Brown nor Cole Beasley is a sure thing. Gore, however, should continue to rumble despite being ancient for a starting back.

No One: If you are planning on starting any Dolphins this week, double check your waiver wire unless you’re tanking as hard as they are. A talentless offense against a top defense is not a good fantasy combination.

Buffalo Bills vs. Miami Dolphins: Why it matters

While Buffalo has only one loss so far, the team is built to pick up a few Ls as the season goes on. In the modern NFL, it is really difficult to play shutdown defense every week. Not only are quarterbacks throwing for more yards, but the rules are tilted in their favor.

If this Bills team wants a wildcard, they need to bank wins against bad teams. Games against the Eagles, Cowboys, Ravens, and Patriots loom later in the season, so Buffalo needs to take care of business in lower-scoring affairs.

For the Dolphins, this is another lost season, and it’s all about if they will get the number one pick and what coaching staff will be there to enjoy it.

Buffalo should cruise here as they prepare for greater challenges ahead.