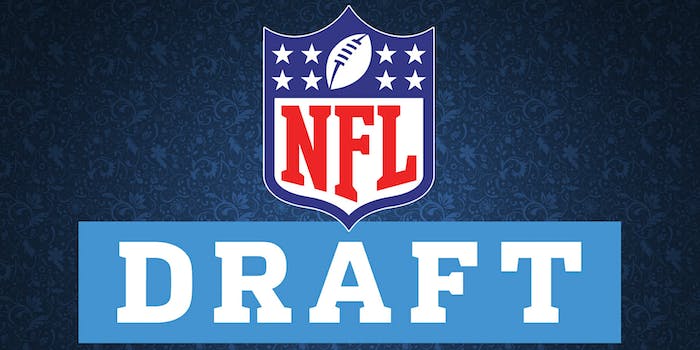 How to stream the 2019 NFL Draft for free

Three days, seven rounds, and history in the making.

The 2019 NFL Draft takes place from April 25-27 in Nashville, Tennessee, ushering in the next class of talent looking for gridiron greatness.

Questions abound: Where will undersized but mercurial University of Oklahoma quarterback and Heisman Trophy winner Kyler Murray end up? How will the rebuilding Oakland Raiders use their three first-round picks? And will the New York Giants finally select a quarterback to replace their aging superstar, Eli Manning? The three days of the 2019 NFL Draft will answer all of these questions and more. And luckily for you, there are plenty of options to stream the NFL Draft.

Here’s everything you need to know about how to watch the 2019 NFL Draft, including the complete draft order, time, the number of rounds, and more.

When is the NFL Draft?

The NFL Draft will take place over the course of three days from Thursday, April 25 through Saturday, April 27. Thursday is dedicated to the first round, while the second and third rounds will commence on Friday. The latter rounds, 4-7, will take place on Saturday. The practice of holding the NFL Draft over three days began in 2010. NFL Commissioner Roger Goodell wanted to capitalize on a heavily watched Thursday night primetime spot for the first round and spread the rest of the event out over the next two days to increase ratings.

For the first round on Thursday, the NFL Draft will officially start at 8pm ET. Friday’s second and third rounds begin at 7pm ET. The NFL Draft will then plunge into the latter rounds, 4-7, on Saturday at 12pm ET, which makes for a nice time to kick back, drink a beer, and perhaps witness the next Tom Brady get drafted.

How many rounds are in the NFL Draft?

The 2019 NFL Draft consists of seven rounds. According to the Pro Football Hall of Fame, early NFL Drafts included many more rounds, as the first draft in 1936 included nine and the second draft in 1937 included 10. The number of rounds ballooned to 20 rounds in 1939 before scaling down to 12 in the 1970s. Eventually, the NFL cut back the number of rounds to its current seven to create the best possible TV product.

What channel is the NFL Draft on?

ABC, ESPN, and the NFL Network will all show the 2019 NFL Draft. The ABC broadcast will be different from what you’ll find on ESPN and NFL Network for the first two days, with coverage hosted by ESPN’s College GameDay crew. Day 3’s coverage, however, will be simulcast on ABC and ESPN. ESPN2 will also provide coverage of the second and third rounds on Friday.

Besides viewing on TV, people with qualifying cable or live TV streaming packages can watch the NFL Draft on their laptop and mobile devices via both the WatchESPN and NFL Network apps. Spanish-language viewers can also watch the 2019 NFL Draft on ESPN Deportes. 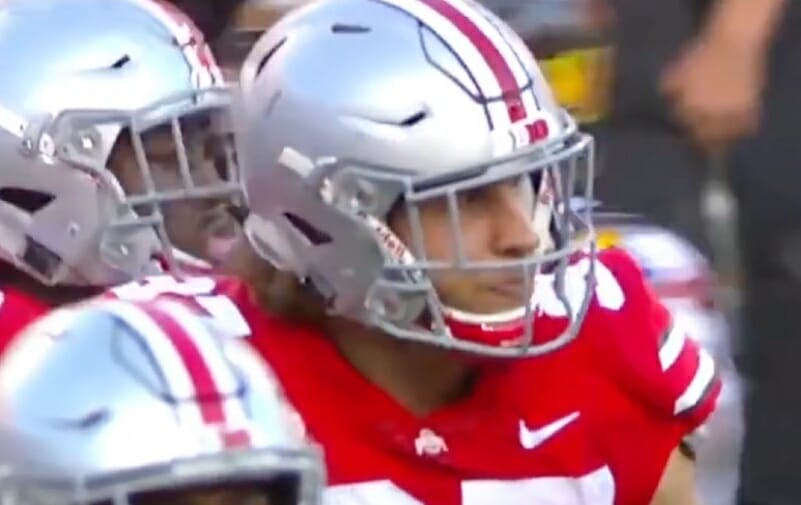 How to watch the 2019 NFL Draft for Free

Considering its 2019, you don’t have to be tethered to a cable package in order to watch the NFL Draft. We’ve detailed which services provide ESPN and/or NFL Network and the benefits that come with subscribing to each of them. Of course, your budget and content tastes will determine which service works best for you, but all of them provide 7-day trials, so you can watch the 2019 NFL Draft for free.

With Sling TV, you have three options in order to stream the NFL Draft (and other live TV programming). First, you’ll want to decide if you want to watch on NFL Network or ESPN (or both). Both the Sling Orange and Sling Blue packages run customers $25 per month, but the offerings within each differs slightly. With Sling Orange, you’ll receive ESPN, ESPN2, ESPN3, as well as the Disney Channel and other sports channels like the ACC Network. With Sling Blue, you’ll get the NFL Network, FS1 and FS2, NBCSN, and select regional FOX Sports and NBC Sports affiliates (both packages come with non-sports channels like CNN, TNT, and AMC). However, you can combine the two, Sling Orange + Blue, to get all of the channels you see above for $40 per month. Also, for an additional $10 per month, subscribers can add the Sports Extra: Sling Blue bundle to gain NFL RedZone. No matter how you cut it, Sling TV has NFL fans covered for the NFL Draft and beyond. (Here’s a complete guide to Sling TV channels and our Sling TV review.)

You can sign up for PlayStation Vue even if you don’t own a PlayStation. Which is great because Playstation Vue’s four-tiered subscription system gives new subscribers plenty of sports and NFL-related options for the cost. The Access level, which runs $44.99 per month, provides ABC and ESPN for your NFL Draft needs (as well as FOX and CBS for NFL league games, and FS1, FS2, and NBCSN for other sports), but the Core level provides so much more for only $49.99 per month. With Core, subscribers get NFL Network, as well as NBA TV, the SEC Network, and CBS Sports Network. Core also permits users to subscribe for the Sports Pack add-on for an additional $10 per month, which includes NFL RedZone for maximum pro football action (Access subscribers cannot order the Sports Pack). That’s a heck of a deal, but PlayStation Vue is sweetening the pot. From now until May 6, new subscribers can receive 20% off their first two months of the Core plan—after their free trial. (Here are all of the PlayStation Vue channels.)

For around $45 per month, Hulu with Live TV gives you nearly the whole suite of ESPN options: ESPN, ESPN2, ESPNU, ESPNews, and ESPN Goal Line. So not only will you receive the NFL Draft, but all of ESPN’s ancillary content (like on ESPNews), too. Unlike Sling TV’s cheaper packages, Hulu with Live TV also provides other sports networks like FS1 and FS2, NBCSN, and SEC Network, among others. This set-up is perfect for NFL fans who are also big college football fans, as watching potential members of the 2020 NFL Draft class (and beyond) becomes even easier. You’ll also get complimentary access to Hulu‘s complete on-demand catalog. (Here’s the complete list of Hulu Live TV channels.)

FuboTV is perfect for the omnivorous sports fan. You won’t get ESPN or ABC, but you’ll get nearly everything else. There’s the NFL Network for the NFL Draft and for Thursday Night Football; NBA TV for pro basketball action; NBCSN for everything from the English Premier League to the NHL and PGA; and every beIN channel for international soccer matches (including Spain’s La Liga and France’s Ligue 1), among others. And if you’re wanting to re-watch your team drafting their future Hall of Fame quarterback and all of the subsequent analysis of the selection, FuboTV gives you 30 hours of free DVR to record it all. That’s pretty cool. (Here’s the complete FuboTV channels list.)

YouTube TV gives subscribers all of the ESPN channels, but similar to Hulu with Live TV, it also provides all of your local broadcast networks. So the official ABC broadcast of the NFL Draft, which ABC announced will differ from ESPN’s, can be viewed via the app. Also, once the NFL season rolls around, subscribers can watch games on FOX, CBS, NBC, and ESPN. The beauty of YouTube TV is that, despite its $50 price tag, up to six people can be registered under one account, easily facilitating group situations where a bill is split with roommates. Oh, and all six people have unlimited cloud storage and can personalize their DVR. You’ll never have to worry about your roommate accidentally deleting your team’s win again before you’re able to view it. (You can find the full list of YouTube TV channels here.) 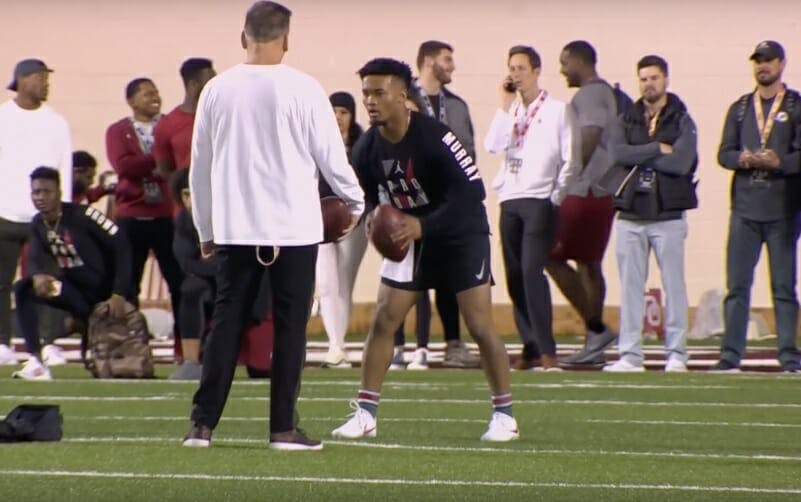 Here’s when every team selects during the 2019 NFL Draft.