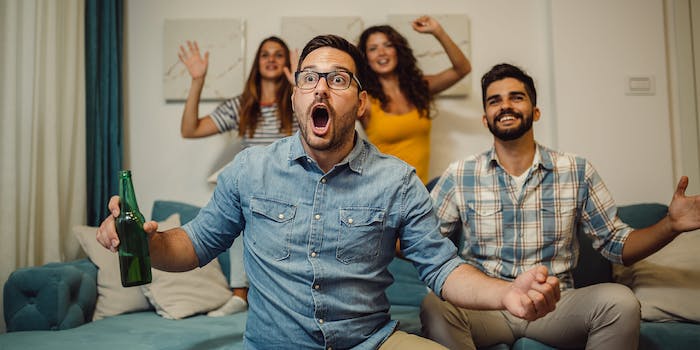 Are you ready for some (Thursday night) football?

For the 2018 NFL season, you have plenty of options if you want to watch Thursday Night Football online. The only problem is that how you watch the big game might change every week.

If you’re hesitant to commit to NFL Network, you’re in luck. Eleven Thursday Night Football games will air on live TV on Fox and stream online via Amazon Prime and Twitch. So, there’s no reason why you should miss a down this season. Here’s everything you need to know to watch Thursday Night Football online and the complete 2018 schedule.

How to watch Thursday Night Football on NFL Network

FuboTV is a sports fan’s ideal streaming service. It’s loaded with niche channels that will ensure you always have a game to watch, especially if you’re a fan of international soccer.

You can add Fubo’s Sports Plus package for an additional $8.99 per month, which will allow you to stream NFL RedZone, in addition to the Pac 12 network, a collection of Fox College Sports channels, and Fight Network. Your monthly total would come out to $53.98, which is pretty good considering everything that you’d be getting.

For more information on FuboTV, check out our comprehensive guide.

Contrary to popular belief, you don’t need to own a PlayStation to use PlayStation Vue. The live TV streaming service is available at four levels of packages. To watch NFL Network live stream, you’ll need the Core package or greater, but to be honest, everything above the Core package is just filler. Core packs in everything you need for live sports—Big Ten Network, CBS Sports Network, ESPN News, ESPNU, NBC Golf, MLB Network, NBA TV, and SEC Network—in addition to PlayStation Vue’s basic 45 channels. (Here’s a complete rundown of PlayStation Vue channels.)

For more information, check out our comprehensive PlayStation Vue guide.

How to watch Thursday Night Football on Fox

Fox has acquired the over-the-air broadcast rights to Thursday Night Football for the next five years. For the 2018 season, Fox will be showing 11 Thursday Night Football games (detailed below). If you don’t have an HD antenna, fear not: All of the major live TV streaming services carry Fox. That means all of the services listed above—PlayStation Vue, FuboTV, Sling TV, and DirecTV Now—will allow you to watch Fox online, but there are two more options to consider. Note: In case it’s not obvious, these two options don’t provide a way of adding NFL Network.

The best part about Hulu with Live TV is that it automatically includes access to Hulu’s on-demand library, which means you can catch up on all of your favorite shows when there’s nothing to watch on TV. That’s a $7.99 value per month, but if you spend $4 more a month, you can upgrade to Hulu with No Commercials. Hulu’s also the only streaming TV service available on Nintendo Switch, and it allows you to add HBO and Showtime.

In many ways, YouTube TV is an ideal sports network, which shouldn’t be surprising given how much it’s invested in sponsoring the World Series. In addition to the basic channels you’ll need to watch primetime games, you’ll get ESPN, ESPN 2, SEC Network, Big Ten Network, Fox Sports, FS1, FS2, and NBA TV, among others. YouTube TV also comes with an unlimited DVR for up to six accounts. You won’t, however, gain access to YouTube Premium, which allows you to have an ad-free experience on YouTube.

If you don’t already have Amazon Prime, what are you waiting for? It costs $120 per year (or $12.99 per month), and you’ll easily recoup on your investment with free two-day shipping and access to Amazon’s on-demand library of originals, documentaries, 4K movies, thrillers, and alien movies.

How to watch Thursday Night Football on Twitch for free

To watch Thursday Night Football online on Twitch, you don’t even need an Amazon account. All you have to do is visit twitch.tv/primevideo. That’s it. Even better: The free Thursday Night Football live stream will work on desktop or mobile, and it’s a global stream, so you can watch from anywhere but China. You’ll also be able chat, which means you might want to brush up on your Twitch emotes.

The links below will take you directly to the relevant Thursday Night Football live stream on Amazon Prime.

New to cord-cutting? Here are our picks for the best movie streaming sites of 2018 and free live TV apps and channels. If you’re looking for a specific channel, here’s how to watch HBO, Showtime, Starz, ESPN, AMC, FX, and NFL RedZone without cable, as well as free movies on YouTube.