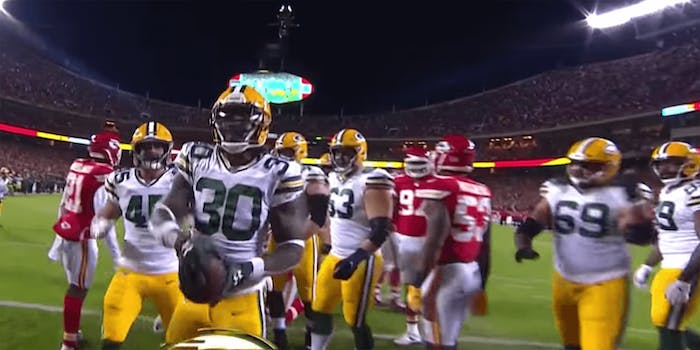 How to stream Packers vs. Chargers live

The Packers, among the best teams in the NFL, face off against the Chargers, one of the most disappointing.

Green Bay faced the Chiefs in primetime last week, and despite the absence of Patrick Mahomes, Kansas City put up a fight. Though backup Chiefs QB Matt Moore kept things interesting, that game reminded us just how good Aaron Rodgers is. Featuring some of his best throws of the year so far, Rodgers tossed for over 300 yards and three touchdowns. Running back Aaron Jones had an unreal game, catching 159 yards worth of passes and adding another 67 yards on the ground.

Rodgers really hasn’t had the receivers to match his talent this year, but that hasn’t mattered as he has done what he can and let Jones do the rest.

On defense, the Smiths, Za’Darius and Preston, continue to lead a strong Packers unit. Za’Darius had another two sacks last week, putting him at eight on the year. Though Rodgers and Jones are getting the ink this week, the Packers defense remains a top ten unit.

Everything is going well in Green Bay while the wheels are falling off in Los Angeles. For years, the Chargers were “almost” there, but this season, LA feels like a shadow of its former self. Though the team won last week, it was only by one point against a Bears team with no real offense. The running game was pathetic, and Rivers only managed 200 yards passing in the squeaker.

This narrow win came on the heels of three consecutive losses to league bottom-feeders, Tennessee, Pittsburgh, and Denver. Ryan Tannehill threw for over 300 yards on this team that might be worse on defense than on offense despite emerging stars Joey Bosa and Melvin Ingram.

Overall, the Chargers feel like a team that is ready to move on. There may have been a Super Bowl window for Philip Rivers, but it has firmly closed. Don’t be surprised if Green Bay puts together its most dominant win of the season against a team that will need to do some deep soul searching in the offseason.

There are a number of options for watching Packers vs. Chargers on streaming platforms that carry CBS. However, consult a coverage map to see what game your regional channel will be playing.

Packers vs. Chargers live stream: How to watch NFL online

Aaron Jones, Running Back: Assuming he’s back after the shoulder injury he sustained Sunday night, Jones remains the only reliable fantasy option in this offense. Picking which receiver will be fantasy relevant feels like playing whack-a-mole when Rodgers seems to choose his targets based on matchups and not talent.

Hunter Henry, Tight End: This offense hasn’t been reliable on the ground or through the air lately. Henry is the only really consistent part of this attack. Though he only had 47 yards last week, the Bears remain a tough defense despite their record. Henry will see better days.

Green Bay Packers vs. Los Angeles Chargers: Why it matters

This Packers team feels destined for greatness. Matt LaFleur’s offense really seems to be working for Rodgers, and last year’s underwhelming performance looks to be in the rear-view mirror.

Though there are plenty of talented teams in the NFC, the 49ers, Saints, and Packers are a cut above the rest. Looking at these three teams, playoff seeding could come down to a race to the finish between Rodgers and Saints QB Drew Brees. Every game matters and all three of these teams want to keep stacking up wins.

This Chargers team needs to think about rebuilding, and at this point, their week-to-week existence is about draft position and figuring out what pieces of the train wreck are salvageable.

Green Bay should roll here. It’s hard to see more than a couple losses remaining on their schedule. The division and even the Super Bowl is starting to feel like Aaron Rodgers’ to lose.