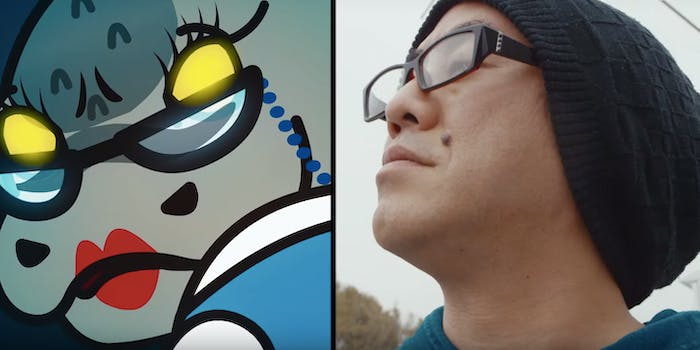 ‘Enter the Anime’ is a soulless infomercial for Netflix original anime

It takes a lot of audacity to make a documentary on something you know nothing about, but that’s exactly what Alex Burunova did for Netflix’s Enter the Anime. Well, at least that’s what she claims in the introductory narration, but I don’t believe it for a second. Enter the Anime purports to be about finding the “soul” of anime, but the hour-long project is nothing more than a cynical, obnoxious, and even racist advertisement for Netflix original anime.

Burunova does none of these things. Instead, she wanders around Tokyo, reciting Orientalist myths about Japan and whining about how she just can’t seem to figure out the “soul of anime.” She calls Japan’s cities “pristine” and “green,” clearly sticking to the tourist-friendly Harajuku and never wandering into seedier areas, such as the entertainment and red-light district Kabukicho, or less-manicured suburbs like Chiba. She treats the people she encounters like props, speaking word-salad Japanese to a young woman as the camera lingers on her confused face. Via narration, she declares the subcultures crazy, especially as the camera passes over a trans woman wearing street fashion and smiling broadly. “How can a culture like this,” Burunova asks over a shot of commuters standing on the train, “produce this?” Cue rapid cuts of various Netflix original anime, as if it’s shocking that Japanese people are multifaceted individuals capable of different modes of behavior.

Burunova’s narration serves as a framing device, stringing together several interviews with creators. The first one is Adi Shankar, the insufferable director of Castlevania who declares himself a time traveler, talks about owning a Nintendo Power Glove, and brags about knowing Kanye West. Next, she interviews LeSean Thomas, creator of Cannon Busters. Enter the Anime, a documentary about a distinctly Japanese medium, devotes a quarter of its runtime to interviewing people not actually from Japan. It’s an insidious, though perhaps unintentional, move that positions “anime” not as the product of another culture that is gaining worldwide popularity, but as a marketing term free for anyone to use. If Shankar can make anime without involving a single Japanese person, then anything can be declared anime to cash in on the trend.

The interviews with the Japanese creators run the gamut from dry to interesting, even insightful in flashes. Rarecho discusses how his creation Aggretsuko reflects Japanese workplace culture and his surprise at how universal it actually was. Yoko Takahashi, who sings the Neon Genesis Evangelion theme song “Cruel Angel’s Thesis,” charms with her delightful personality. The interview with Rilakkuma and Kaoru’s creators intersperses the actual interview footage with stop-motion animation including a big Rilakkuma mascot. Industry veterans like Kenji Kamiyama and Shinji Aramaki offer interviews as well, but instead of drawing on their years of experience, the documentary focuses only on the series they produced for Netflix. It’s an advertisement, nothing more.

Unfortunately, even the most interesting interviews suffer from terrible editing, featuring kaleidoscopic split screens, glitch effects, and rapid-fire jump cuts of shots lasting less than a second each. These edits make it nearly impossible to focus on what’s actually being said. There’s no sense of continuity or synthesis; Burunova fails to build on the interviews with the people behind the medium she ostensibly wants to learn about. She either uses her limited vocabulary to call the people she’s interviewing “deranged” or “crazy” or “edgy,” or she just complains and complains about not being able to understand the “soul of anime.” She offers no insight—or anything of value, really.

That’s not surprising, considering Enter the Anime only focuses on Netflix original anime. Anime is an incredibly diverse artform, but Netflix tends to only fund series cut from a certain cloth. They’re either cutely marketable, like Aggretsuko, or hyper-violent and gory. It promotes an outdated view of the medium that fans have been trying to shake off for years. Netflix has licensed critically acclaimed series that buck that image, such as Dragon Pilot and Violet Evergarden, but Enter the Anime ignores them.

Enter the Anime is an hour-long infomercial for Netflix original anime that wastes everyone’s time. The trite, condescending narration only serves to regurgitate dehumanizing “weird Japan” and “orderly Japan” myths. The interviews will bore anyone not already interested in anime, and Burunova’s framing narrative will irritate anyone who knows anything about the medium. You’re better off checking out one of the hundreds of anime starter guides on the internet that don’t have an agenda.