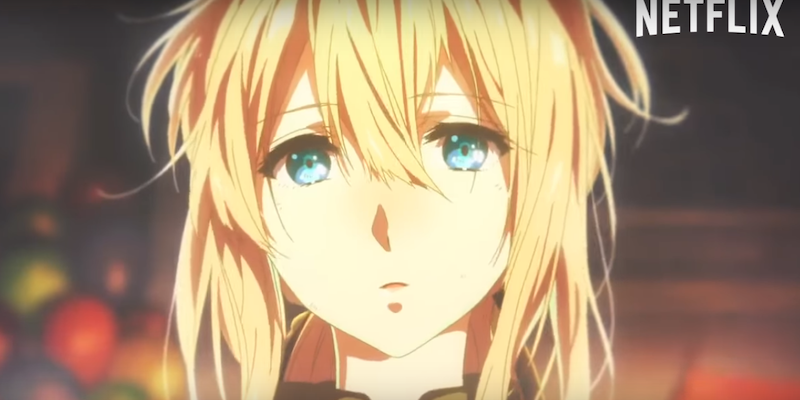 Netflix anime ‘Violet Evergarden’ is a visual feast—but the story, not so much

Netflix did something odd with the English-language release of Violet Evergarden: It streamed week-to-week in every English-speaking territory except the United States, which got it all at once. The reasoning behind that decision isn’t clear, but anime fans in the U.S. were forced to wait while the rest of the world watched one of the most hotly-anticipated series of 2018.

Violet Evergarden, the titular character, is a former child soldier in an ambiguously European country in the late stages of a vaguely World War I and II-inspired conflict. Her commanding officer’s final order was for her to live and love freely before he went missing-in-action. But Violet, after spending her life being treated as a killing machine, doesn’t understand how to follow through. In order to understand the emotion, she becomes an Auto Memory Doll, a job somewhere between a scribe and a ghostwriter, writing letters to help people eloquently express their true emotions.

Violet Evergarden lived up to fan expectations in at least one area: visually. Kyoto Animation has built up a reputation for fluid, expressive animation over the past few years, and Violet Evergarden may be its most gorgeous series yet. The visuals border on theatrical quality, with nary a stiff or off-model shot. Each character, with glossy hair and bright clothes, looks like they just stepped out of a shampoo commercial, and they all possess unique body language that communicates their personalities. Every frame is perfectly composed for maximum visual and emotional impact—Violet seems to live in a world where emotional revelations and breakthroughs always happen at the magic hour when the sunlight turns everything golden.

Everything is a little too pretty. Violet Evergarden is a story about emotions, from falling in love to coping with grief and loss. However, emotions can often be messy, complicated, even ugly—a fact that the show rarely confronts. There’s no problem that can’t be fixed with a visit from a Doll, no emotion too complicated not to be expressed through pretty words and resolved in a 20-minute episode. About half the series is made of single-episode vignettes about Violet and her clients. These stories—a dying mother writing letters to give to her young daughter for 50 years of birthdays, a playwright struggling with writer’s block after the death of his daughter—carry the nuance of your average Hallmark film. They fall somewhere into the uncanny valley between calculatedly maudlin and embarrassingly sincere, where it’s impossible to tell which one the creators had in mind.

The show’s odd structure contributes to the sense of superficiality, as it essentially compresses four acts into only 13 episodes. Violet, lacking in emotional vocabulary, struggles to write even perfunctory letters at first. I expected the show to mostly be about how she grows as a writer through the gradual process of listening and understanding others, but the story shoots forward several months to when she’s already built up so much skill that he’s helping others understand themselves. After a few episodes of vignettes, it shifts gears again, and then one more time before the finale.

As a result, there is very little genuine catharsis. Violet’s growth, and the growth of those around her doesn’t feel earned. We aren’t allowed to see her learning process, nor any growing relationships. The moody lighting and swelling musical score work overtime to fill these emotional gaps, to fill in the gaps left out by the writing. Considering the critical and popular acclaim Violet Evergarden has received, that alone captivated much of the audience. However, with messy and muddled storytelling and soapy scenarios straight out of an afternoon teenage drama, it’s ultimately a shallow, unsatisfying experience.