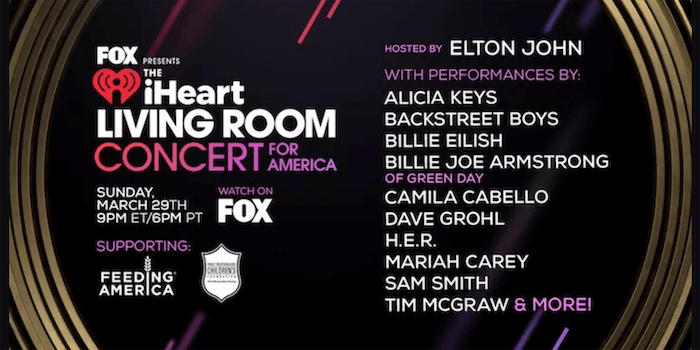 How to stream the iHeart Living Room Concert for America live

HOW TO STREAM IHEART LIVING ROOM CONCERT FOR AMERICA

iHeart Living Room Concert for America: What is it?

Before the coronavirus pandemic took hold of the United States, iHeart Radio had planned its 2020 Music Awards for March 29 at L.A.’s Shrine Auditorium. Though the award show is postponed to a still-to-be-announced date later this year, the entertainment giant decided to keep an hour of its time slot on Fox and air a mammoth star-studded concert with performers checking in from their homes to contribute to an hour-long concert.

Hosted by Elton John, the lineup promises a number of big entertainment names to pack into a commercial-free hour, including:

The show will also feature some drop-ins by Lizzo, Ciara, Russell Wilson, and Demi Lovato.

According to an iHeart Radio release, viewers can support two of many charitable organizations helping victims and first responders during this pandemic — Feeding America and First Responders Children’s Foundation.

How to live stream the iHeart Living Room Concert for America

The concert airs on Fox, which is accessible via any of the following streaming services.

FuboTV is a solid TV streaming service option, whether your tastes run to entertainment (AMC, Syfy, FX), or news (MSNBC, CNN). It’s also got a good selection of local channels; depending on your market, you’ll have access to CBS, Fox, and NBC and those local affiliates.

If you’re a sports fan, it will appear tailor-made for you, with NBA TV, NFL Network, NBCSN for Premier League matches, 10 BeIN Sports channels for La Liga and Ligue 1, FS1, FS2, UniMás, and Champions League action via TNT all on tap. If you can’t watch a game or match live, FuboTV offers a three-day replay for each match and 30 hours of cloud DVR. (Check out the complete FuboTV channels list.)

Hulu with Live TV includes a broad array of entertainment and sports programming among its offerings. As a subscriber to the service, you’ll get free access to Hulu’s sizable on-demand library. (Check out the full list of Hulu Live TV channels.)

Sling TV provides two base channel package options, each priced at $30 per month. Sling Orange includes three ESPN channels, while Sling Blue includes sports channels like NFL Network as well as local channels. (Sling Blue customers in select markets get NBC, see if yours has it here.) Sling Blue also brings Fox News Channel, MSNBC, and Headline News as part of its regular slate of channels, with Fox Business Channel available for those who get the Sling Blue News Extra add-on.

Spanish-speaking viewers have quite a few options. For bilingual families, you might consider the Español: Best of Spanish TV package for either Sling Orange or Sling Blue for 24/7 specialty channel LaLiga TV and beIN SPORTS Connect: Channels 4-9, which features matches from La Liga, Ligue 1 and Copa del Rey, among others. Both packages cost $5 per month after your free trial. Sling TV Latino is another Spanish-language package for $10 per month, including NBC Universo, History en Español, and—of import to soccer fans—four BeIN Sports channels. (And choosing Best of Spanish + Sling Orange for $35 per month gives you access to ESPN Deportes.) For more information, check out our guide to Sling TV channels and our Sling TV review.

YouTube TV is a great option for people who want a streaming package that includes local channels, offering all the major options in a great number of markets. YouTube TVis also a great option for sports fans, including the full suite of ESPN and Fox channels, TNT, NBCSN, and broadcasting partnerships with three MLS teams. (Take a look at the full list of YouTube TV channels here.)