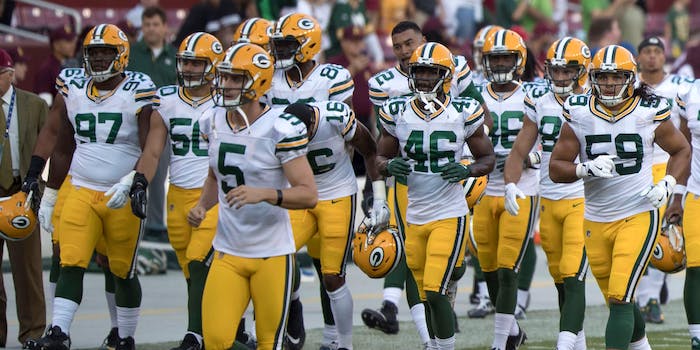 How to stream Packers vs. Chiefs on Sunday Night Football

Two of the NFL's best teams meet, but without Patrick Mahomes, the Chiefs will likely be a shadow of themselves.

This should have been the game of the year. But, unfortunately, it won’t be.

Even the most optimistic estimates around Patrick Mahomes’ knee injury have him missing about three weeks of action. Though he could come back sooner, he certainly won’t be ready to go as his Kansas City Chiefs face off against the Green Bay Packers.

Backup quarterback Matt Moore did alright against the Denver Broncos last week, giving the Chiefs enough offensive spark to win. But, with Moore facing off against Aaron Rodgers, don’t expect a repeat here.

It is hard to see where the yards will come from for the Chiefs to best the Packers with Mahomes on the sidelines. While Tyreek Hill and Travis Kelce are special players, they will be severely limited if Moore once again only completes about half of his passes.

While LeSean McCoy has been productive for Kansas City, his 46 yards per game on the ground isn’t going to win this in the trenches against Green Bay. The Chiefs seem hopelessly outgunned.

The Chiefs couldn’t be getting the Packers at a worse time. Green Bay has finally mastered the new offense and Aaron Rodgers seems back to his old self. With Rodgers putting up a stat line like 429 yards and five touchdowns, it looks like coach Matt LaFleur’s new scheme is working is optimizing every opportunity—and last week’s stat line came without injured star receiver Davante Adams.

The Packers defense is also sneakily good. The unit was ranked seventh in Defensive DVOA entering Week 7. This D isn’t a sack machine, so you don’t always see it in the state lines, but this is a nice group. Inside linebacker Blake Martinez’s goal-line stand toward the end of the first half last week is an example of how this defense can make a difference. The same goes for a big stop of RB Josh Jacobs in the red zone forcing a turnover on downs later in the game.

Green Bay’s defense may remain underrated in this game, as it will likely once again be playing much of the game in garbage time. Kansas City’s weak unit, by contrast, should be exposed by perhaps the greatest QB in football.

Aaron Rodgers and company should cruise here. We would even give them the edge with a healthy Mahomes. The Packers might be the most balanced team in the NFL, and the Mahomes-less Chiefs shouldn’t even pose a threat.

Marquez Valdes-Scantling, wide receiver: Fantasy owners have been waiting for MVS to have his breakout game, and it finally came last week. KC’s defense should let Rodgers’ receivers eat all game long.

Travis Kelce, tight end: You don’t love the Chiefs offense here against a solid Packers D, but Green Bay does give up yards. Even with Moore throwing the ball, Kelce should get some targets and maybe even score in garbage time.

Green Bay Packers vs. Kansas City Chiefs stream: What to watch for

This one is key for both teams, so it’s a shame that Mahomes will be on the sidelines. Rodgers and company want to continue holding off a surging Vikings team that seems to be fixing its early season problems and won Thursday night to improve to a borderline-dominant 6-2.

Kansas City doesn’t have much competition in-division, but if it drops the next two to the Packers and Vikings while Mahomes is out, things could get rough. While the Chiefs should still win the AFC West, sinking to three or four games behind the Patriots, Colts, or Texans would make a playoff road game likely.

The Packers will likely start to build a buffer between themselves and much of the NFC with a win here, and with a pretty soft schedule the rest of the way, the Pack could be in great shape heading into the playoffs.

Despite Mahomes’ injury and Kansas City’s defensive struggles, you could still imagine these teams facing off again in the Super Bowl. But, this week, KC will just look to limit the damage.