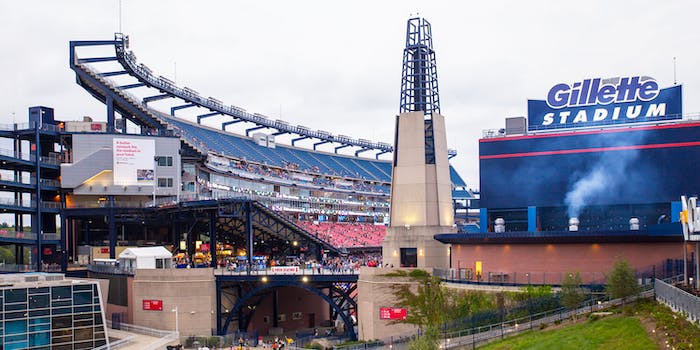 How to stream Patriots vs. Browns live

The Patriots are undefeated so far this season in the NFL. Doesn't seem like that's going to change in Week 8.

The New England Patriots are going to lose some games eventually, but they probably aren’t going to lose to the Cleveland Browns.

New England is one of two remaining undefeated teams, along with the San Francisco 49ers. In a change of pace for the Pats, it is the defense that has carried them so far this year. Heading into Week 7, New England was the number one team in terms of Defensive DVOA.

This defense has been amazing at all levels. Stephon Gilmore is probably the league’s best cornerback. Linebackers Kyle Van Noy and Jamie Collins have taken to calling themselves “The Bogeymen,” thanks to their fearsome play. Defensive tackle Danny Shelton is having a Pro Bowl-caliber season.

While Tom Brady has played well, the Pats have a dearth of reliable offensive weapons this season. This reality has been masked by the team’s terrible opponents, which have included the Redskins, Dolphins, Steelers, and Jets. If you watch the Pats play, however, you see that the offense isn’t as dynamic as past New England squads.

Luckily for the Patriots, the Browns are yet another good matchup. There is a lot of offensive talent on this team with Nick Chubb and Odell Beckham Jr., but Baker Mayfield has been the kind of inconsistent, turnover-prone quarterback that Bill Belichick has built his career beating.

Mayfield has thrown five interceptions in his last two games. Against the 49ers, Mayfield put up this abysmal stat line: 8/22 for 100 yards and two interceptions. Even with dominant play from running back Nick Chubb, you can’t win with games with quarterback play like that.

The interior of the Browns defense, both on the line and in the linebacking corps, has been poor in Cleveland. Running backs have had big weeks against Cleveland recently, and while the Pats don’t have an amazing group of running backs, they should gain yardage easily here. Poor tackling has been a persistent problem with this sloppy unit as well.

Unless Baker Mayfield has one of his best games, this feels like a comfortable win for the Patriots. Even if Nick Chubb has a big day, the difference between these defenses (1st and 21st in Defensive DVOA) and the chasm between Brady and Mayfield make the Pats the clear favorites here.

There are a number of options for watching Patriots vs. Browns on streaming platforms that carry CBS. However, consult a coverage map to see what game your regional channel will be playing.

Patriots vs. Browns live stream: How to watch NFL online

Tom Brady, Quarterback: The Browns have a bad habit of getting into shootouts with good teams and losing. Brady seems like a safe start here, though he has not found a consistent offensive weapon besides Julian Edelman. Unless Brady adds a nice receiving option before the trade deadline (and we’re not sure Mohamed Sanu is that), it will likely just be Brady and Edelman who are fantasy relevant the rest of the way.

Nick Chubb, Running Back: If Frank Gore ran for 109 yards against this team, Nick Chubb can too. The Pats have been stingy against the run, but Chubb should still get his.

New England Patriots vs. Cleveland Browns: Why it matters

There are a few teams trying to catch up to the Pats in the AFC. The Colts, Texans, and Ravens are all having great seasons thus far. When Mahomes gets healthy, we’ll see where the Chiefs are, but they have the kind of explosive offense that reminds you of past Pats squads.

New England has had a cupcake schedule thus far, and with games against the Ravens, Cowboys, Texans, Chiefs, and Bills ahead, they don’t want to lose games against inferior competition.

Cleveland is on the verge of irrelevance. Now that they’ve dropped to 2-4, the preseason hype is starting to become a distant memory. If they drop to 2-5, it gets harder to see them as a playoff team, even in the weak AFC North. If the Browns continue to play like they have been, catching the Bills or Texans in the wild card race seems next to impossible.

Trust Tom Brady to keep the game in control here and trust the New England defense to take advantage of Cleveland’s mistakes.