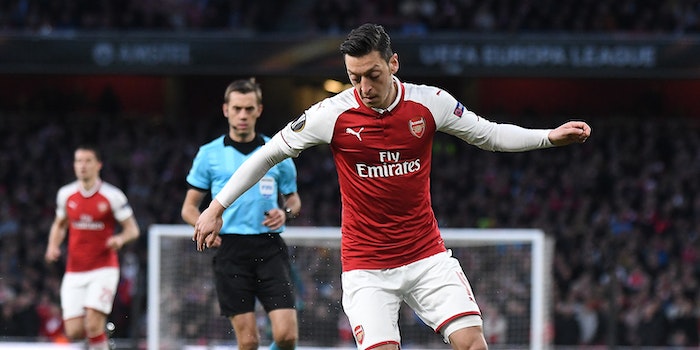 How to live stream Arsenal vs. Real Madrid

The Gunners are on tour, and with eyes on a prize.

The 2019 edition of the International Champions Cup, at its best, is providing matchups worthy of the Champions League but in a de facto preseason format. On Tuesday, two big European clubs coming off disappointing seasons (by their standards) will continue their tune up in the ICC.

Real Madrid is “on the mend” with some new signings, most notably Belgian international and former Chelsea fixture Eden Hazard, although rumors are swirling about a major departure that will change the squad considerably. Arsenal, who lost to Hazard’s Chelsea team in the Europa League final to miss out on a last chance at the Champions League, is having an excellent ICC so far, though one of its best players may be on his farewell tour in red and white.

Here’s everything you need to know to watch Real Madrid vs. Arsenal at the 2019 International Champions Cup.

The match is on both ESPN and ESPN Deportes. With a one-week free trial via all the services listed below, it provides an easy way to stream Real Madrid vs. Arsenal and other International Champions Cup matches.

Real Madrid vs. Arsenal at the International Champions Cup: Why it matters

For Arsenal, it matters because the Gunners are actually winning the tournament. While the parameters are a bit random for an international tournament—play the three teams you’re drawn against, win, and aim for a good goal differential, with no playoffs progressing to a final—Arsenal’s done well in its first two matches against Bayern Munich and Fiorentina, racking up a +4 goal differential in large part due to 20-year-old sensation Eddie Nketiah. Mesut Ozil, who missed Arsenal’s 2014 American tour resting after Germany’s World Cup win, is on the tour even as there are rumors about him moving to Turkey, following what appeared to be a frictive season with new manager Unai Emery.

Real Madrid, meanwhile, lost its ICC opener 3-1 to Bayern, though Hazard, fresh off his move from Chelsea, showed he fit in with Los Blancos on his debut. Perhaps the most talked-about Real player this week, however, is Gareth Bale, who didn’t play Saturday and likely won’t play again Tuesday due to the team working on his transfer out of the squad. Will he end up in China? Back in England? Shocking everyone by staying behind after the ICC to join an MLS squad? Whatever it might be, the saga could impact the players’ mood as they battle their fellow Emirates Airlines-sponsored team near the nation’s capital.