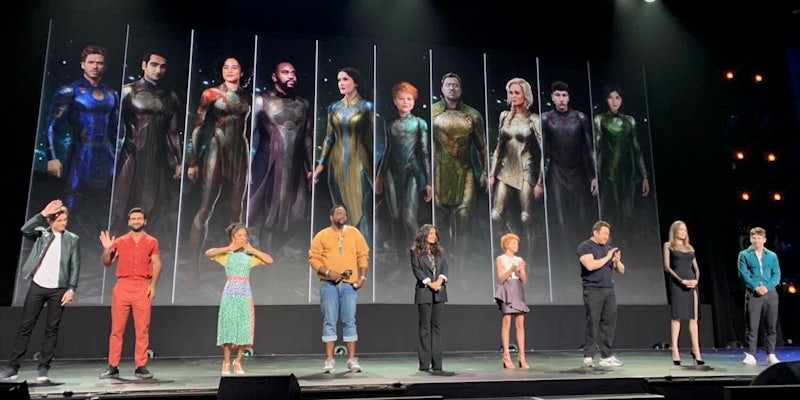 Kevin Feige confirms an ‘Eternals’ character will be gay

Marvel Studios hasn’t had the best track record for LGBTQ representation in its films. If those moments weren’t removed from the film itself (like it was with Valkyrie in Thor: Ragnarok), fans had to settle for the tiniest of scraps and that nameless character in Avengers: Endgame portrayed by Joe Russo with vague promises that LGBTQ superheroes were coming to the MCU.

Now we know exactly when the first LGBTQ Marvel hero will arrive on the big screen—and we know a little bit about who he might be.

After announcing Phase 4 at San Diego Comic-Con last month, Marvel Studios head Kevin Feige told io9 that Valkyrie (Tessa Thompson), who’s canonically bisexual in the comics and will appear next in Thor: Love and Thunder, will be the first LGBTQ superhero. But after his presentation at the D23 Expo, Feige revealed that particular milestone will occur even sooner in The Eternals, which will be released on Nov. 6, 2020.

In an interview with Good Morning America (starting around the 2:01 mark), Feige gives us a little bit of detail on what anchor Ginger Zee described—in setting up Feige’s response—as “an openly gay character.”

“He’s married, he’s got a family, and that is just part of who he is,” Feige said.

Feige gives no further hints as to who the openly gay character will be, although it’s rumored to be Ikaris, the Celestial character played by Richard Madden. (Although Kit Harington’s casting as Dane Whitman, aka the Black Knight, was announced over the weekend, his character has been romantically linked with the Celestial Sersi in the comics.)

But reports that The Eternals would feature a gay character have been swirling around the film—which was only officially confirmed to exist last month at SDCC—even longer. Although Feige confirmed that an LGBTQ character would be in The Eternals at SDCC, he didn’t specify the character’s gender or any other details about it.

Major LGBTQ characters in blockbusters have been rare with Sulu—whose husband and daughter are briefly seen in Star Trek Beyond—being one of the exceptions. But with the inclusion of an openly gay character in The Eternals and Valkyrie in the next Thor movie, we might be getting closer to a point where fans don’t have to just accept a glorified cameo from one of Endgame‘s directors for LGBTQ representation.