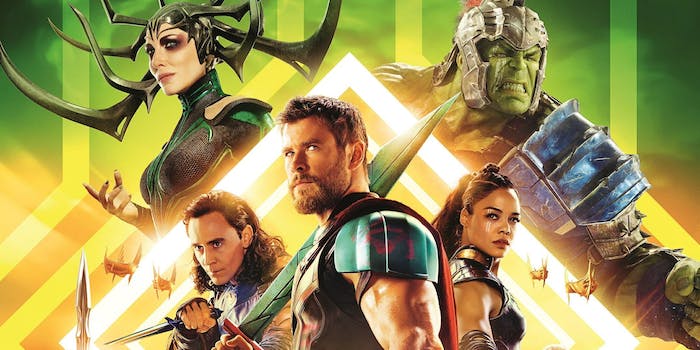 ‘Thor: Ragnarok’ is a disco inferno of pure charisma

This review includes no major spoilers for 'Thor: Ragnarok.'

Taika Waititi took one look at Asgard’s sparkly rainbow bridge in Thor, and thought, “I gotcha.” Thor: Ragnarok is a colorful extravaganza of dumb jokes, smart jokes, charismatic performances, and 1980s arcade-game spaceships that make “pew pew” noises with their laser guns. It’s the visual equivalent of gorging yourself on candy, and literally every character has chemistry with everyone else.

Since Natalie Portman left the franchise after Thor: The Dark World, the sequel had to change direction. Abandoning the fish-out-of-water premise of the first two movies, Ragnarok introduces a new cast alongside Thor, Loki, and a couple of supporting figures like Heimdall (Idris Elba). Waititi’s vision is a boisterous spacefaring adventure, toning down the emotional intensity and embracing Chris Hemsworth‘s underrated talent for comedy. Thor jets between Asgard (where Loki has disguised himself as their father Odin), Earth (where we tolerate a pointless cameo from Doctor Strange‘s Benedict Cumberbatch and his appalling American accent), and finally Sakaar, the Planet of Jeff Goldblum.

The sleazy Grandmaster of Sakaar will surely go down in the annals of classic Goldblum roles. Collecting people and technology through a series of one-way wormholes, Sakaar is the garbage dump of the universe. The Grandmaster transformed it into a playground of casual excess, supporting a massive gladiatorial arena. He’s a much better antagonist than the tediously serious villains of Thor: The Dark World, because like Loki, he’s not especially menacing. Motivated by a desire for childish thrills, the Grandmaster exists as a vehicle for Goldblum’s expansive charm. He’s exactly the kind of idiot who would kidnap a Norse god, give him a makeover, and put him in the ring with his favorite gladiator: the Hulk.

Thor and the Hulk (Mark Ruffalo) is an unexpected partnership that totally works. While the first two films relied on the contrast between Thor (a well-meaning jock) and the intellectual Jane Foster and Loki, Ragnarok pairs him with more similar characters. Hulk is a kindred spirit, as is Valkyrie (Tessa Thompson), the hard-drinking bounty hunter who delivers Thor to the Grandmaster.

Actually, Valkyrie is a revelation. The trailers introduced her as a smirking badass on a winged horse, worthy of a 1980s power metal album cover. But in the movie, she’s so much more. Born on Asgard, Valkyrie is a viking warrior of the old school: an aggressive drunken lout who loves to fight, tempered by a tragic hero’s backstory. She always seems like she’s two seconds away from belching in someone’s face. How often does Hollywood allow us to see a woman like this? What a gift.

Thor and Loki’s relationship is the main holdover from previous movies, as it should be. They’re simultaneously a compelling sibling rivalry and a hilarious double-act, confirming that Loki is still Tom Hiddleston‘s finest role. He’s the perfect not-quite-villain: slimy and untrustworthy, yet thoroughly entertaining to watch.

After three films to work out their issues, Thor and Loki have reached a kind of impasse. They still bicker and feud, but they’ve learned to accept each other as they are. Thor has learnd to expect Loki’s constant betrayals, while Loki has developed an eye-rolling tolerance of Thor’s “punch first, ask questions later” brand of heroism. It’s the kind of character-based humor that works best after several films together, and it puts the bland one-liners of certain other Marvel movies to shame. Taika Waititi understands that comedy can be a foundation in itself, unlike Civil War or Doctor Strange, which felt like serious action movies with jokes sprinkled on top.

While Thor tangles with the Grandmaster on Sakaar, a more conventional blockbuster storyline unfolds on Asgard. Odin’s long-lost daughter Hela (Cate Blanchett) has returned, hell-bent on becoming the new queen. She’s a classic Hollywood supervillain: somewhat two-dimensional, but salvaged by a world-class actor who clearly relishes the role. Clad in a gothic catsuit and horned helmet, Blanchett is a queen of camp villainhood. She lounges on thrones and destroys enemies with a regal handwave, backed up by Karl Urban as her gormless sidekick Skurge.

With Thor unable to save Asgard, Heimdall becomes the de facto leader—as well he should. Heimdall is basically the only sensible adult in the Thor franchise, you can’t just waste Idris Elba in a background role. He gets his own film-within-a-film, taking over Thor’s duty as an epic hero so Hemsworth can focus on being hilarious.

This kind of sweet absurdity is why I preferred Ragnarok to Guardians of the Galaxy, Marvel’s other rainbow-hued space franchise. Waititi’s retro influences have a lighter touch than James Gunn‘s endless pop-culture references, and Ragnarok has none of the casual sexism of Guardians. It also uses comic book art in a way that few Marvel movies have done before. Production designer Dan Hennah borrowed heavily from the art of Marvel icon Jack Kirby, working with costume designer Mayes Rubeo to turn Sakaar into a disco playground. It’s surprisingly rare to see such a wholehearted embrace of comic book visuals.

Aside from some lowkey political commentary on Asgard’s colonial backstory, Thor: Ragnarok is light on deeper meaning. It’s light in general, and that’s exactly the film’s creators intended: to bring pure and simple joy. Given the blandness of Ant-Man and Doctor Strange, and the overstuffed nature of Civil War and Age of Ultron, it may be Marvel’s best movie since Captain America: The Winter Soldier. A refreshing interlude that combines creativity with an understanding of why we loved these characters in the first place.