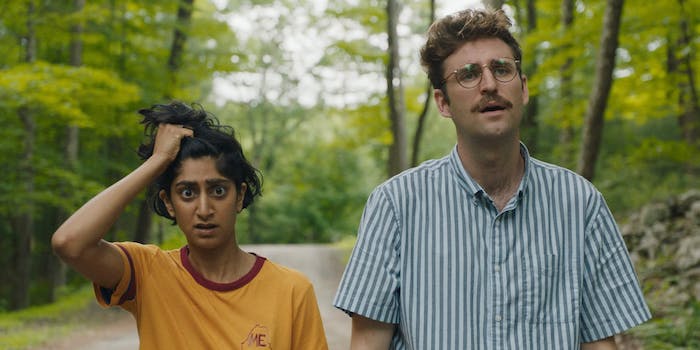 ‘Save Yourselves!’ is a charming and humorous take on the alien invasion movie

A longtime couple unplugs for a week—and misses the end of the world.

“It’s not like the end of the world if we forget something,” Jack (John Reynolds), one-half of a hipster Brooklyn couple about to leave for a week-long vacation to a cabin upstate, says to his longtime girlfriend Su (Sunita Mani). Jack and Su are attempting to unplug and reconnect, dreaming of all the things they could do or how they can better themselves by turning their phones off while they’re away. Even if you go into Save Yourselves! completely cold, Jack’s quip has the clear gravitas of Famous Last Words.

RELEASE DATE: Summer 2020
DIRECTORS: Eleanor Wilson and Alex Huston Fischer
RELEASE: Theatrical
A young, hipster Brooklyn couple decides to unplug for a week during a trip to a friend’s cabin in the woods in an attempt to reconnect with one another. But during their technological vacation, aliens invade Earth, something they have no idea is happening because they turned off their smartphones.
Advertisement Hide

But Save Yourselves! never pretends to be the kind of alien film where its leads are the exact right experts for the situation and have seemingly unlimited weapons at their disposal; in most cases, they might even be among the first to die or framed simply as millennials who are way too attached to their smartphones. Instead, Reynolds and Mani, along with a script from co-directors Eleanor Wilson and Alex Huston Fischer, find the humanity within those riddled clichés at the film’s funny and heartwarming center—but also at the end of the world.

For Jack and Su, their overreliance on technology isn’t depicted as some kind of condemnation, although it’s often played for laughs. They can Google answers to questions they’re having mid-conversation and spend more time paying attention to that than the party they’re attending. While at home, they sit contently on a couch with their phones and a computer at their disposal and get into what could be a relationship-ending argument over the deletion of curated tabs; even Alexa (yes, the Amazon virtual assistant) is invoked in the middle of it.

They’ve been together for ages, so there’s comfortable ease to their relationship together, but you can also begin to see the beginning of a rut starting to form, and after hearing what a friend accomplished after a little time cut off from the rest of the world, Jack and Su attempt to try it for themselves, one of several things they do to fix themselves. Naturally, it doesn’t go according to plan.

It’s something that they both didn’t think through enough and too much; Jack, for instance, is resistant to opening up (and cannot build a fire to save his life) while Su decided to handwrite a listicle of relationship questions they could ask one another but doesn’t understand how she’s basically bringing the internet with her anyway. Neither of them is equipped to handle the reality of having to look inward at their own relationship. And Jack and Su are so disconnected from the world that when they see the aliens’ arrival fly past them in the sky, they initially think it’s a meteor. Talk about intergalactic FOMO.

Save Yourselves! doesn’t concern itself too much with the aliens themselves, who are basically Star Trek’s tribbles on steroids but much deadlier, outside of an immediate physical need. But it doesn’t really matter in the long run because, as two regular people caught in the middle of an alien apocalypse, very little of that really matters to Jack and Su; they even point out that it’s almost impossible to confront an alien threat through human means because aliens aren’t going to approach things the way that humans do.

They’re our window into how we might react to that kind of disaster, and well, it’s not as heroic as we’d like to think. They’re wholly unprepared (although maybe not at the “stuck in a cabin in the middle of nowhere with no technology” level of unprepared), they have to wrestle with their own morals, and in its own twisted way, Jack and Su are tested in a much more direct way than they would’ve been had their technological vacation worked out. And whenever Save Yourselves! threatens to go completely off the rails, Reynolds and Mani’s charming and grounded performances remind us of what’s important without hitting us on the head. And while their technology wouldn’t have necessarily saved them, it wouldn’t have doomed them, either.

Save Yourselves! premiered at the Sundance Film Festival.