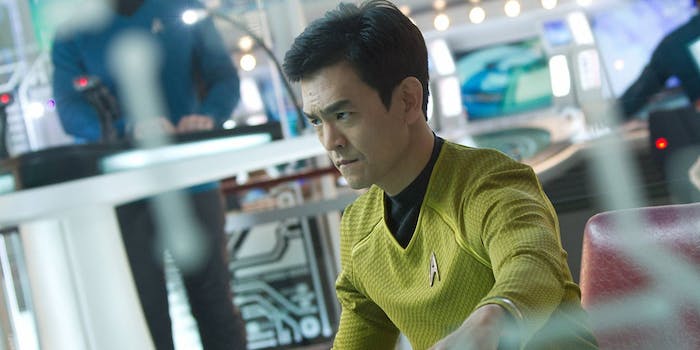 ‘Star Trek Beyond’ confirms that Hikaru Sulu is gay

According to 'Star Trek Beyond,' the helmsman of the Starship Enterprise is canonically gay.

Sulu was originally played by George Takei, who in later life has become a prominent activist for LGBT rights. In a tribute to his ongoing legacy as an icon of the Star Trek franchise,  writer Simon Pegg and director Justin Lin decided make Sulu canonically gay in the upcoming movie.

“I liked [Pegg and Lin’s] approach, which was not to make a big thing out of it, which is where I hope we are going as a species, to not politicize one’s personal orientations,” Cho said.

While Hollywood still has a long way to go in terms of queer representation, it feels appropriate for Star Trek to be the first big sci-fi franchise to include a gay character in its main cast. Beginning with its diverse casting and powerful political allegories of the 1960s series, Star Trek has always presented an optimistic and progressive view of the future.

With Hikaru Sulu, Star Trek Beyond is setting a couple of important precedents. First of all, this revelation makes it clear that long-established characters (like, for example, superheroes) do not have to follow the “assumed straight” sexual mores of the period in which they were created. Secondly, Sulu paves the way for more queer characters in Star Trek‘s future—and we’re certain to see this happen in Bryan Fuller‘s new TV series next year.

BONUS: I watched ’60s Trek for the first time, and it was awesome