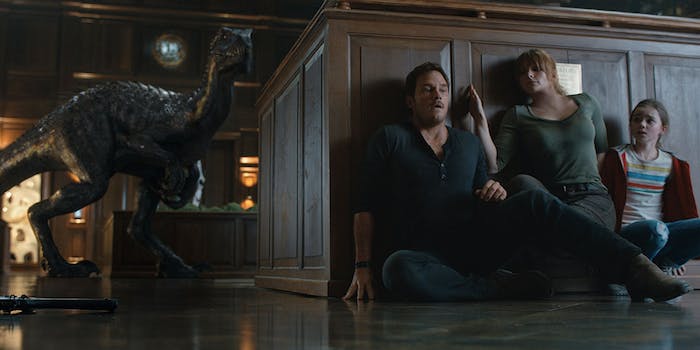 He just tweeted it out.

While several major franchises have made a spectacle out of releasing the titles of their upcoming films, director Colin Trevorrow took a much simpler approach in revealing the title of the third Jurassic World film.

He shared a photo of the clapperboard on social media to announce the start of filming, but in doing so, he also casually unveiled the title for the new movie: Jurassic World: Dominion. Trevorrow is directing a script he co-wrote with Emily Carmichael (Pacific Rim: Uprising).

So far, we know very little about Dominion. Chris Pratt, Bryce Dallas Howard, Justice Smith, and Daniella Pineda are all reprising their roles after Jurassic World: Fallen Kingdom. But this time around, the original trio from Jurassic Park—Sam Neill, Laura Dern, and Jeff Goldblum (who had a small role in Fallen Kingdom)—are reuniting for the film.

After it was announced, Trevorrow explained that he didn’t want to just bring those legacy characters back for the sake of bringing them back; there had to be a reason why they would return.

“We’d have had to come up with a reason why Ellie, Malcolm, and Grant all went to the theme park on the exact same day it broke down—again,” he told Empire magazine. “The next film allows the legacy characters to be a part of the story in an organic way. Emily Carmichael and I call it ‘Jurassic Park VI’, because it is.”

And while there’s very little to go on with the actual name of the film, it’s a rather fitting one considering that Fallen Kingdom ended with the arrival of dinosaurs back on the mainland and taking on a new dominion of their own.

Jurassic World: Dominion will arrive in theaters on June 11, 2021.