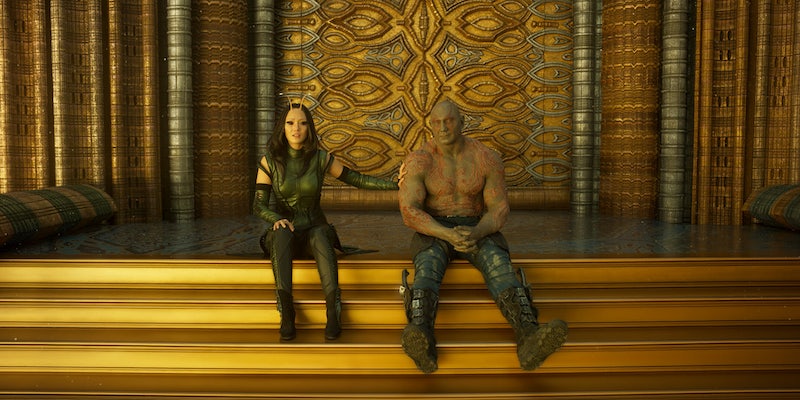 Filmmakers are just making things harder for themselves.

After hinting that Guardians of the Galaxy Vol. 2 includes an LGBTQ character, writer/director James Gunn is trying to correct the record. “We don’t really know who’s gay and who’s not [in the Marvel franchise],” Gunn told Digital Spy. “It could be any of them.”

Then, he gave an interview that prompted the Guardian headline, “There are gay characters in the Marvel Universe.”

“What I meant is, there’s a lot of characters in the MCU, and very few of them have we delved into what their sexuality is. Whether it’s guy or straight or bisexual, we don’t really know. So I imagine that there are probably, you know, gay characters in the Marvel universe, we just don’t know who they are yet.”

By continuing to answer these questions, Gunn puts himself in an awkward position. Because in reality, there aren’t any LGBTQ characters “in the MCU.” Those characters could just as easily be androids or aliens. James Gunn is talking in distant hypotheticals, but LGBTQ representation requires some actual commitment onscreen.

Gunn is the latest filmmaker to publicly support LGBTQ representation in theory, while failing to follow up in practice. The most infamous example is Beauty and the Beast director Bill Condon, whose “exclusively gay moment” turned out to be a split-second shot of two men dancing in a crowd scene. Power Rangers barely did better, dedicating a ton of publicity to a blink-and-you’ll-miss-it line where a female character says she has “girlfriend problems.”

Filmmakers like Gunn and Condon see the enthusiasm for LGBTQ representation, and offer subtext in response. The problem is, LGBTQ audiences are already very familiar with subtext, because that’s all they usually get.

Gunn’s example was particularly ridiculous, because after seeing Guardians of the Galaxy Vol. 2, I’m pretty sure I know which character he was talking about. There’s a scene where a woman rejects a man because he’s not “her type,” in a way that could refer to his gender, his species, or any number of other reasons. In the context of the MCU, it’s less noticeable than the queer subtext between Captain America and Bucky Barnes, a relationship that provided the driving force for three movies. Subtext isn’t always intentional, and it’s not the same as representation.

In Gunn’s defense, this situation is only partly his fault. If a blockbuster like Guardians of the Galaxy had a gay protagonist, it wouldn’t get released in China, a highly desirable overseas market. Given a choice between LGBTQ representation and the Chinese market, studios will invariably follow the money. It’s just embarrassing when filmmakers want to toe the line of homophobic censorship, and be celebrated as progressive at the same time.