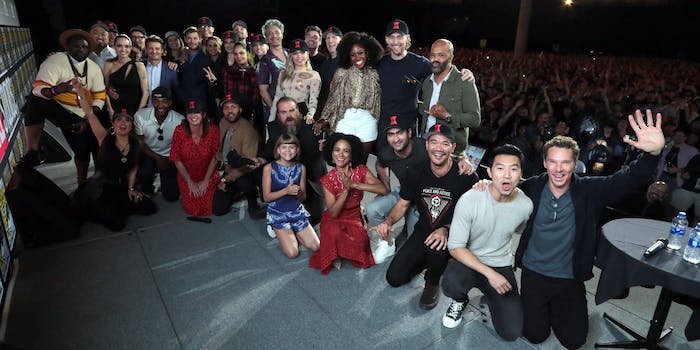 The MCU’s Phase 4 is all about Marvel getting weird

With vampires, witches, and mythical heroes, Phase 4 leans into Marvel's supernatural side.

This weekend saw Marvel unveil Phase 4 of the MCU at San Diego Comic-Con, announcing a ton of exciting casting choices for films including The Eternals, Blade, and Shang-Chi. But what else can we glean from those revelations? For one thing, Phase 4 is going to be a lot weirder and more magical than the early years of the Marvel franchise.

Marvel’s first three phases revolved around the Avengers as a traditional superhero team, mostly rooted in reality, and with strong U.S. military ties for most of the lead heroes. Some movies featured magic (Doctor Strange, Thor) and some were quirkier than your average superhero adventure (Guardians of the Galaxy), but they generally followed a similar formula, and outright magic was a small part of the MCU. Judging by the announcements we saw at Comic-Con, Marvel is moving on from those military/law enforcement stories, and is now comfortable enough to get weird.

With Captain Marvel, Guardians, and Black Panther sequels further off in the future, most of Phase 4’s headline movies look more fantastical and offbeat than the Infinity War/Endgame era. Black Widow, Hawkeye, and Falcon and the Winter Soldier are the only holdovers from the Iron Man/Captain America phase of military heroes, while almost everything else is supernatural. Thor: Love and Thunder expands on Marvel’s first original fantasy franchise. A pair of TV shows will star the magical Loki and Scarlet Witch. A star-studded What If  animated movie will echo the classic Marvel comics exploring wacky alternate-universe scenarios. Mahershala Ali’s Blade will introduce vampires to the MCU. Eternals features a cast of quasi-immortal mythic alien heroes. And finally Doctor Strange in the Multiverse of Madness (a title that comes straight from the psychedelic 1970s heyday of the comics) promises to be the franchise’s first horror movie. Meanwhile Shang-Chi may not be supernatural, but it’s Marvel’s first martial arts film, putting it in a fresh subgenre compared to other origin stories.

With Endgame out of the way, it honestly feels like the pressure’s off. Knowing the audience is here to stay, the franchise can shift into more obscure and less “realistic” areas of the comics. There’s an overall sense of greater creative freedom, and along with more diverse casting choices, Marvel has hired (and rehired) some very interesting directors.

Taika Waititi is obviously the biggest name here, returning triumphantly to the Thor franchise and doing something we honestly thought was impossible: persuading Natalie Portman to come back. Thor: Love and Thunder will feature Portman as female Thor, and make Valkyrie (Tessa Thompson) the MCU’s first openly queer hero. Then we have two acclaimed indie directors on Eternals and Shang-Chi: Chloé Zhao (The Rider) and Destin Daniel Cretton (Short Term Twelve). The Doctor Strange announcement also suggests that Scott Derrickson will get more creative control this time around, playing to his strengths as a horror director, which didn’t really come through before.

Magic existed in the MCU since day 1, but it was always portrayed as the exception, not the norm. Characters like Iron Man and Captain America lived in a logical, scientific world much like our own, with characters like Loki as a disruptive outside influence. Phase 4 is clearly going to change that. Between Doctor Strange and Scarlet Witch, we’re moving into an era of witchcraft and wizardry. With Blade, we have a franchise that never would have appeared in Marvel’s early years, because it requires the MCU to be infested with vampires. As for The Eternals, well… who knows what the Eternals might bring?