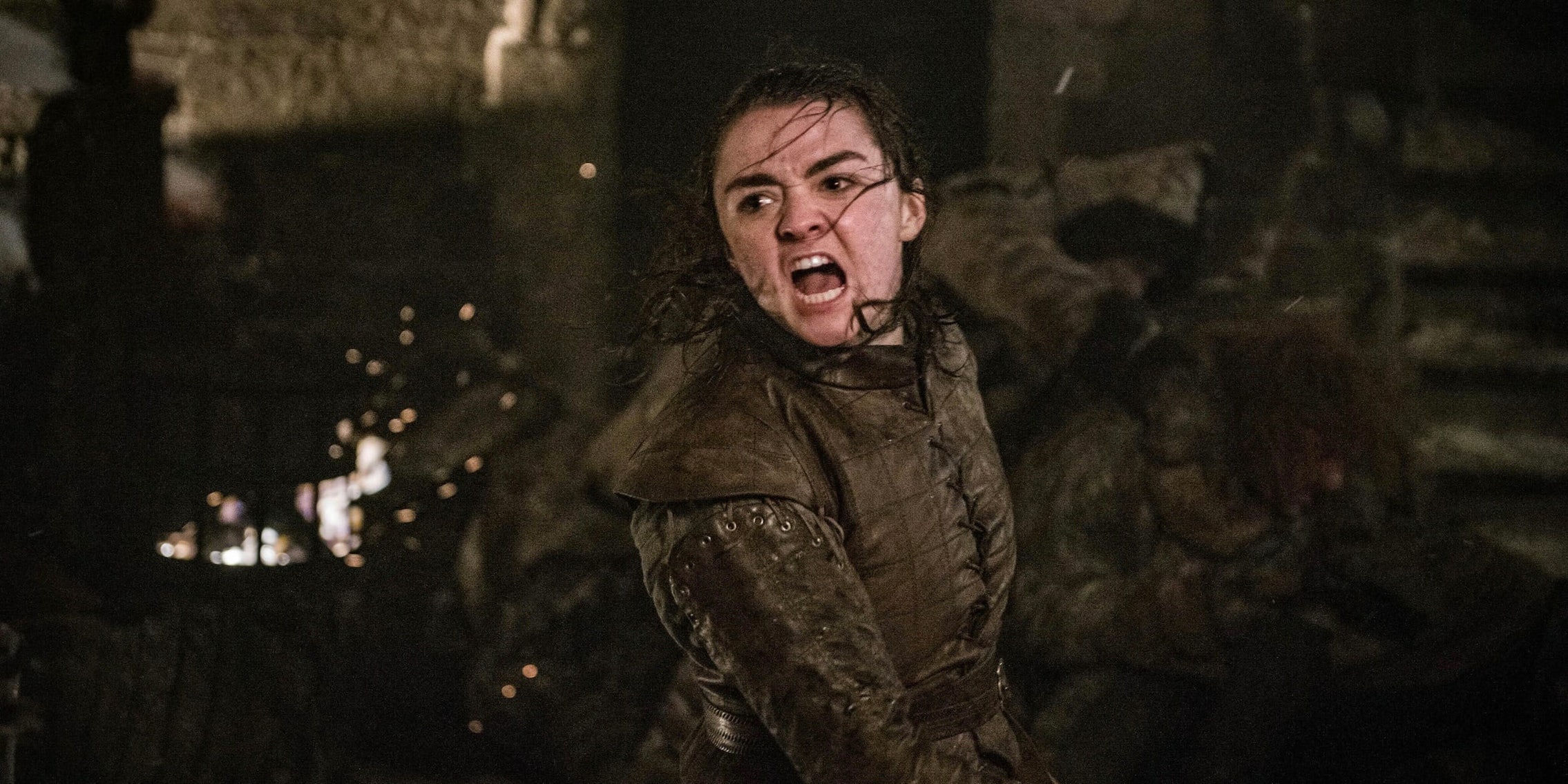 ‘Game of Thrones’ staged a blowout battle—so why did it disappoint?

The dead start coming and they don’t stop coming.

After the first two episodes of Game of Thrones put the spotlight on its characters, the highly anticipated battle episode, “The Long Night,” ramped up the action. Full of shocking moments, smaller poignant asides, and more than enough death to go around, it was a lot, and it ended with the shocker of a lifetime: Arya Stark killed the Night King with a Valyrian steel dagger.

The stakes and expectations of “The Long Night” were insurmountable. We knew how long it took to shoot. It had to follow two very good character-driven episodes, one of which is already being lauded as one of Game of Thrones’ best. It had Emmy award-winning director Miguel Sapochnik, who’s behind “Hardhome” and “Battle of the Bastards,” at the helm. After Ned Umber was the only casualty of season 8 to date, death was practically guaranteed to us.

So why did parts of it feel like such a letdown?

We got death and carnage; too many dead people to count. We got that victory against all odds, leaving Game of Thrones’ final three episodes to deal with that fallout and the threat of Cersei Lannister in King’s Landing. Some fallen characters got their moments of redemption. We even got a dragon fight mid-air!

Let’s take a look at what went right and wrong—apart from the living’s battle strategies.

The literal darkness of the Battle of Winterfell

One of the biggest complaints that fans had about the episode was how dark the episode was. Not from a tonal or thematic standpoint, but literally speaking. There were several moments where you couldn’t see what was going on at all.

Part of that was by design. In the middle of “The Long Night,” there was so much snow and ice swirling in the air that it was impossible for Daenerys Targaryen to see Ser Davos Seaworth’s signal to set Winterfell’s trenches ablaze. It was so dark that when all three dragons took flight, Jon Snow and Dany had no idea if they were attacking friend or foe up in the air. It’s an incredibly powerful moment to see the Dothraki ride against the Army of the Dead—even if it was kind of a dumb move—with flaming weapons and see all of those fires extinguished from a distance.

Beric Dondarrion’s used his flaming sword as something akin to a torch for some time now. The threat of the unknown built the tension of the episode and based off data from our heart monitors, it worked.

But the use of that darkness only gets you so far.

Game of Thrones has been a darker series from a lighting standpoint for a while, a purposeful decision from those who make the show to create a more naturalistic look. But the downside to that for viewers is that it’s so dark that you can’t even see what’s going on.

Did Ghost and Rhaegal survive? You couldn’t really tell until next week’s preview came around. Is Samwell Tarly dead, or is he just struggling to summon the strength to get back up? (This happened a couple of times during the episode.) Are those characters you see struggling to fend off wights being stabbed or just weighed down by the attacking corpses? And when the dead rise in the crypts of Winterfell, who died in that one-sided fight?

And honestly? If your story is powerful and coherent enough, chances are most fans won’t really care if your nighttime battle is improperly lit. Just look at the Battle of Helm’s Deep from The Two Towers, the main cinematic battle that Sapochnik looked to when crafting this episode. There’s no way that a battle that took place at night and in the rain should look like that, realistically speaking, but it’s executed so well that it works anyway.

The limitations of the carnage

At the end of the day, we lost eight named characters (seven on the side of the living plus the Night King) amid the chaos of the Battle of Winterfell. Some of those characters have been with us since the very beginning. For others, you might’ve had to Google their names. Entire houses of Westeros were wiped out in one battle. (Pour one out for House Mormont.) You can’t say that they didn’t fight valiantly.

Game of Thrones went there. It had a huge battle episode and released the flood of death from the edges of Winterfell all the way down the crypts. (Turns out those fan theorists were onto something!) Men, women, and children—including young Lyanna Mormont, who was crushed to death by a wight giant but not before she could take him out—were all slain by the Night King or the Army of the Dead. The Dothraki horde is essentially wiped out.

But with those character deaths came another complaint: Game of Thrones keeps protecting its lead characters with Valyrian steel plot armor while throwing its more minor characters to the wolves. We saw it last season after Thoros of Myr and a bunch of nameless redshirt free folk became the only casualties of “Beyond the Wall.” For a show that garnered a reputation for ruthlessly knocking off its leads and traditional heroes, very few of the show’s leads or heroes have been in real and tangible danger of actually dying (and staying that way) for some time.

I’m of the opinion that “Beyond the Wall” could’ve used at least one more death—maybe Tormund Giantsbane—to raise the stakes. It’s even clearer now who’s important to the endgame. (Perhaps fighters like Davos or Tormund, or even Podrick Payne, could’ve added to the heartbreak.)

Beric Dondarrion did right by Arya, and in saving her, he finally fulfilled his purpose. Ser Jorah Mormont went out saving the woman he loved as he fought alongside her. Eddison Tollett helped save his fellow brother. After doing her part in the battle, Melisandre took off her necklace, and after hundreds of years, finally laid herself to rest. And Theon Greyjoy proved himself the best of all of them. (More on him in a bit.)

But we also got a few of those quieter moments along the way. Everything that happened in the crypts—from Sansa Stark and Tyrion Lannister’s conversations to their quiet resolve to not go down without a fight once the Stark corpses started to attack all of the nameless extras—was wonderful to watch. Seeing characters save one another, again and again, to continue fighting like Jaime Lannister and the newly knighted Brienne of Tarth, gave us emotional stakes that were missing from much of the episode. And then there was everything with Bran and Theon.

“The lone wolf dies, but the pack survives”

From the moment that Theon volunteered to protect Bran Stark in the godswood against the Night King, it was easy to guess that he was a goner. And while that proved to be true, the show also cemented the final blocks of Theon’s redemption.

At the start of season 8, Theon rescued his sister Yara from their uncle and pledged to fight for Winterfell. He got welcomed home with open arms by the Starks, who have now forgiven him for his actions from several seasons ago. But Bran, who had already waved away Jaime’s attempts to apologize to him, told Theon that none of it mattered because he’s where he’s supposed to be. Theon Greyjoy might not be a Stark by blood or by name, but he is one in spirit.

“Everything you did brought you where you are now,” Bran told him. “Where you belong. Home.”

Once his end became inevitable, Bran gave him one more reassurance.

The Theon Greyjoy at the start of the series might’ve run away from certain death, and no matter whether he charged or stood his ground, death was all but certain for Theon. But this changed and redeemed Theon as he met death head-on.

And then comes in Arya. The lone wolf of House Stark if there ever was one, a young woman who had—unbeknownst to her—spent years training for this moment. In her first true battle, she killed wights with the skill of a veteran fighter and snuck around a library full of wights with most of them being unaware. She had saviors in her corner with both the Hound and Beric willing to risk their lives for her, and Melisandre to remind her of the role she would play in this war. Most importantly, Arya had the weapon to take out the Night King and the skillset to do it.

Arya is a character who had the skill to kill the Night King, but with very little connection to the Night King, you can argue that it’s a random choice by the creators given that both Jon and Dany have more personal reasons to want to kill him. But it wasn’t a decision made lightly; according to the Game of Thrones showrunners, they planned to have Arya kill the Night King for three years.

With the bodies on the ground, the living have to pick up the pieces along the way. With the Army of the Dead gone for good, that will certainly be a lot less daunting.