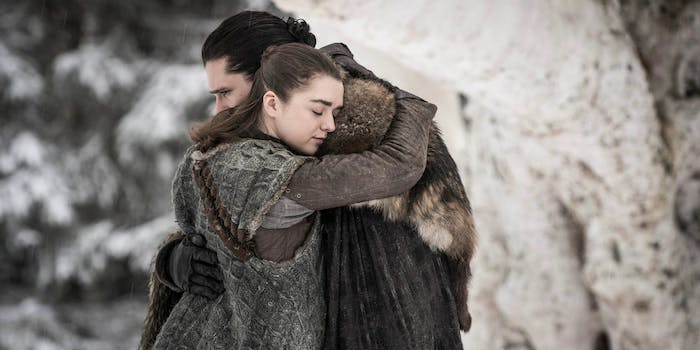 After years of buildup, a surprisingly crowd-pleasing season opener.

Warning: This article contains spoilers for the Game of Thrones season 8 premiere, “Winterfell.”

For the first time in nearly two years, we finally have a Game of Thrones episode to obsess over. And with its return comes many of the standards we’ve all come to expect from a Game of Thrones season premiere: character moments and little plot.

That’s not necessarily a bad thing, per se. Over the past few seasons—around when Game of Thrones started going fully off-book—the show has fully embraced the spectacle that comes with having an incredibly popular high-fantasy (and high-budget if we’re being honest) series. We see much more of the battles, gore, and Daenerys Targaryen’s two massive dragons, and we revel in characters pulling off a big move like Cersei Lannister blowing up the Sept of Baelor at the end of season 6.

So when Game of Thrones slows down the wheel with its usual resetting of the board and layering it with reunions and character moments, we’re not quite sure what to do. As much of a crowd-pleaser that the premiere turned out to be, it lagged at times as it made sure that most of the emotional stakes were in place by the time the Night King arrives in Winterfell. But in true Westerosi fashion, there was enough drama to threaten what should be a no-brainer of an alliance.

For seven seasons, Game of Thrones has opened with more or less the same title sequence it always has, albeit with a few tweaks along the way. Paired with Ramin Djawadi’s famous theme, we’d see just some of the locations we’d visit each episode along with four staples: King’s Landing, Winterfell, the Wall, and Dany’s location. Given the show condensing the characters to two or three locations, season 8 changed things.

Instead of the astrolabe recounting the stories of old, we’re seeing just some of the stories that Game of Thrones has told over the years with blatant references to the Red Wedding, the birth of Dany’s dragons, and the Wall falling. It then kicks off at the hole in the Wall, which is now grayed with an icy blue path laying track to the Night King’s progress before we’re introduced to the Last Hearth, the seat of House Umber. (More on that in a bit.)

From there, we receive an intimate tour of both Winterfell and King’s Landing, both of which show areas we’ll be spending lots of time in. For Winterfell, it’s the weirwood tree, great hall, and crypts. At King’s Landing, we see Cersei’s map room, the dungeons where the Targaryen dragon skulls are kept, and the throne room.

A feast of reunions and callbacks

If nothing else, “Winterfell” will be known as “the one where everyone reunited before it all fell to shit.” While not everyone reunited—we still have a few more reunions to look forward to in future episodes like Dany and Jaime, Sansa and the Hound, Bran and Theon, and Jon and the direwolf he seemed to have forgotten even exists—this episode did contain a multitude of reunions, which then sparked their own memes.

Some of them made us cringe while a few of them pulled at our heartstrings. Others, such as Jon and Arya’s reunion and Jaime’s arrival at Winterfell, called back to their previous departures and arrivals. Sam’s reunion with Jon, sparked by his encounter with Dany and Jorah, revealed what we’ve known all along: Jon Snow is the son of Rhaegar Targaryen and Lyanna Stark. It’s a partially selfish move by Sam, and while well-acted, it’s unclear if the path to making that decision is fully depicted.

We’re seeing old relationships reform and take new shape—with a potential bit of romance for one Stark who still bristles at being called a lady—while familial ties strain even further as Jon asks everyone to trust his decision to bend the knee to Dany. But hey, at least Sansa and Arya are finally on the same page (instead of whatever season 7 had them do) with Arya calling Sansa the smartest person she’s ever met, a far departure from how the two interacted in season 1.

Although we figured that Jon would one day end up taking Rhaegal for a spin at the end of last season, we didn’t expect it to happen this quickly. But while on a stroll to visit Drogon and Rhaegal outside of Winterfell’s gates, Dany gives him that opportunity. (While she clearly cares for Jon, it’s amusing to see Dany’s amusement at possibly seeing Rhaegal kill Jon for trying to ride him.)

Musically, it’s a powerful moment for Jon, although Jon’s actual execution of that ride ends up looking hokey; it’s partially by design considering that he has no idea how to ride said dragon. Dany wishes that they could stay near that waterfall for 1,000 years, which isn’t unlike Ygritte’s desire to never leave the cave she occupied with Jon Snow in season 3. Jon and Ygritte left that cave and Ygritte died a season later. And while Dany’s still alive, it didn’t take long for Jon’s world to shatter. Perhaps he wishes he stayed at that waterfall?

Right off the bat, Theon fulfills his promise to his fellow Ironborn to rescue his sister Yara from the grips of his uncle. Unlike Theon’s last battle, it’s nearly painless aside from a quick headbutt from Yara. But she quickly forgives him and offers him her hand.

Although Yara pledges to recapture the Iron Islands and give the living a place to retreat to if Winterfell falls, Theon’s heart lays elsewhere. Yara, who sees this conflict in Theon, allows him to return to Winterfell.

It’s a payoff from a heartfelt scene between Jon and Theon in “The Dragon and the Wolf” in which Theon—who was once a ward of Ned Stark’s but betrayed the Starks after reuniting with the Greyjoys in season 2—accepted both aspects of his identity.

“Our father was more of a father to you than yours ever was,” Jon told Theon last season. “But you never lost him. He’s a part of you. Just like he’s a part of me. You don’t need to choose. You’re a Greyjoy, and you’re a Stark.”

With Theon heading back to Winterfell, perhaps he’ll be able to assist Jon in his own identity crisis now that Jon knows he’s a Stark and a Targaryen.

What’s up with Cersei?

Disappointment over the lack of elephants aside, Cersei mostly comes up with victories in “Winterfell.” She relishes in the Wall falling, pays Bronn lots of gold to murder her brothers, and has the Golden Company at her command. Her biggest problem now is Euron Greyjoy, who is insistent that he be given some kind of reward for giving her the seas, justice, and an army. So she eventually sleeps with him.

Euron wants to see how he compares to the other men Cersei slept with, but his fantasies are more about Cersei eventually becoming pregnant with his child. Her face is unreadable.

In the season 7 finale, Cersei was pregnant with Jaime’s child—and Tyrion Lannister is aware of that fact, hitching it to why he believes Cersei will keep her word—and as far as we know, that’s still the case. Is she sad about Jaime’s betrayal? Upset about her current predicament? Or is she mourning a loss? (While an off-screen miscarriage is possible, we certainly hope that if that is the case, the show makes it a little clearer than this moment.)

If Cersei remains pregnant, she could probably pull off pretending the baby is Euron’s like she did with Robert Baratheon. We doubt that Euron knows how something like pregnancy actually works.