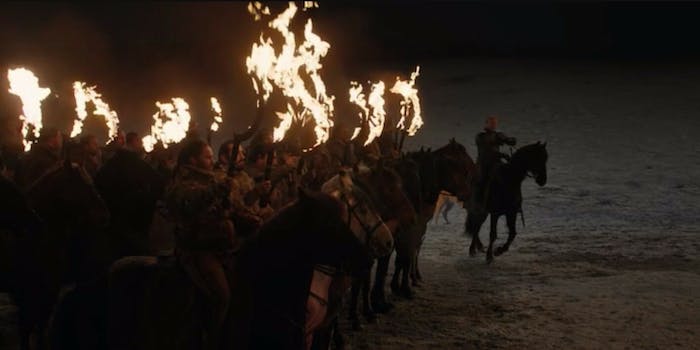 Who died in the battle of Winterfell in ‘Game of Thrones’?

Game of Thrones season 8, episode 3 was as epic and brutal as anticipated. I don’t drink coffee, but after watching the undead and the living clash in the battle of Winterfell, I think I’ll take mine as black as my TV’s screen. We’ve been wondering and theorizing who would die and who would live forever, and we’ve finally got our answers. Strap in, grab a heavy drink, pet your emotional support animal. Here’s who dies at the Battle of Winterfell.

Who died at the Battle of Winterfell?

Cause of Death: Swarmed by undead in the first wave

First up on the chopping block, a Dothraki warrior you’ve probably seen skulking around since season 6. Qhono has basically served as the commander of Daenerys’ Dothraki forces ever since she killed a bunch of khals and emerged from that flaming hut back in season 6. We see him and several thousand Dothraki warriors charge valiantly into a pitch-black night, only to be swarmed by the undead, the flaming lights of their sickles (uh…thanks, Melisandre!) gradually snuffed out. We’re pretty sure that’s him resurrected as an undead by the Night King later on, too.

Cause of Death: Stabbed by undead outside Winterfell walls

And now our watch has ended. Well, poor Ed’s has anyway, and unfortunately, he went out without much fanfare while saving a visibly shaken Samwell from being swarmed. Even worse, he’s briefly reawoken as an undead himself when the Night King makes his final push. We’ll always remember you, sweet Ed.

Cause of Death: Crushed in the fist of an undead giant

While dozens of Winterfell men retreated, the absolute badass Lyanna Mormont stood her ground until the very end. As sad as it is to see her go (what will become of Ser Pounce?), I’ve got to admit that “crushed to death by a zombie giant” feels sufficiently metal for such an occasion.

Cause of Death: Stabbed repeatedly by undead

The seemingly unkillable leader of the Brotherhood Without Banners has finally met his end. While rescuing Arya alongside the Hound, Beric throws himself into the fray to give Arya a chance to escape, getting pinned down by at least two undead, who proceed to stab him a bunch of times. The move gives Arya enough time to get by, and Beric manages to just make it into Winterfell’s main hall alongside them before breathing the last breath of his sixth life.

Cause of Death: Speared by the Night King

It sure is a good thing HBO effectively wrapped up Theon’s long-running character arc in season 8’s first two episodes, because the man formerly known as Reek is done. With some final words of thanks and comfort from Bran, Theon finds the strength inside himself to charge the Night King in a last-ditch effort. The Night King isn’t terribly concerned, promptly breaks Theon’s spear in half, and stabs it straight through Theon’s gut. Theon manages a few desperate gasps and a glance back towards Bran before succumbing to his injuries. He may have struggled to do the right thing at any point in his sorry life, but there’s no doubt Theon went out with some dignity left to his name.

Cause of Death: Stabbed in the gut with a Valyrian steel dagger by Arya

OK, raise your hand if you didn’t see this one coming. Or at least didn’t see it going down quite this way. After eight long seasons and a lot of “you want some of this” hand gestures, the Night King was killed by none other than Arya Stark, who leaped at him with a Valyrian steel dagger raised. The Night King managed to catch Arya by the throat, and let’s be honest, who didn’t think she was done for in that moment? Turns out Arya had the upper (well, lower) hand on the Night King, dropping the dagger between them, into her right hand, and plunging it into his gut, shattering him and his wights into ice, and rendering the undead inert.

Observant viewers will remember that the dagger was at one point Littlefinger’s, who in season 7 gave it to Bran, who in turn gave it to Arya. It’s unclear if Bran knew Arya would land the decisive blow on the Night King, but he gave it to her in the exact spot where that pivotal scene took place.

In any case, the night may be dark and full of terrors, but Arya truly lived up to her own motto: “What do we say to death?

Cause of Death: Repeatedly stabbed and slashed by undead

Though I’m sure he would have preferred living, it seems the tragic romantic Jorah Mormont died in the most thematically appropriate way possible: Defending his love Daenerys from hordes of undead outside the walls of Winterfell after she falls off an injured Drogon. Though we bounce between multiple points of views, you can feel how dragged out this final stand is, as Jorah takes stab after stab in defense of his khaleesi. Rest in peace, Jorah, the most valiant Nice Guy™ out there.

Cause of Death: Removed collar hiding her true emaciated and elderly form

It’s been a long time since we saw Melisandre in her true form, a horrifically aged husk of a woman kept alive only by a magic collar. After she fulfills her various narrative roles at Winterfell (lighting a trench just in time, pep-talking Arya), she heads on out the main gate, ditches her magical collar, and allows her body to rapidly age before Ser Davos’ eyes, collapsing in the snow.

And that’s it. I think Game of Thrones pulled an Infinity War on us and killed everyone but the main characters we thought would get stabbed, speared, crushed, eaten, burned, or shattered. According to the short trailer for episode four, Ghost the direwolf managed to survive that initial undead wave, and Rhaegal the dragon managed to evacuate after dropping Jon off into the battlefield. Jaime, Brienne, Podrick, Tyrion, Sam, Sansa, Arya, Greyworm — darn near everyone that counted made it out. Now we get to see what Cersei has planned for the survivors, and just as many questions about who will ultimately come out on top in Game of Thrones.