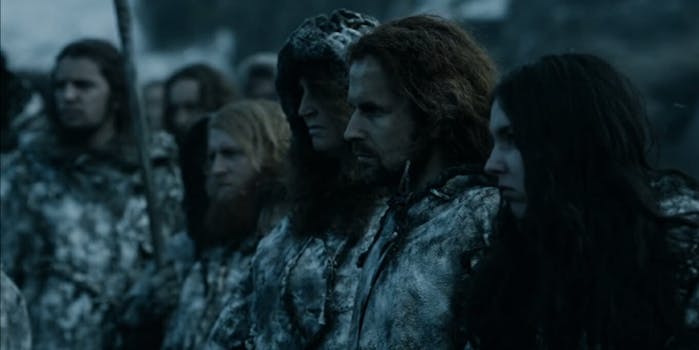 Will the Free Folk survive ‘Game of Thrones’ season 8?

Here's what you need to know about Tormund Giantsbane, Gilly, and more.

Season 8 of HBO’s Game of Thrones has dozens of loose threads to tie up. Characters and storylines that have been dangling for ages—in some cases, for years—will finally find some kind of closure. Among those fortunate enough to survive (thus far) are the few wildlings who made it south of the Wall before its destruction at the end of season 7.

Wildlings have been an important part of the story since the first season, with characters like Ygritte, Osha, and Gilly, and the surviving few are sure to be central to the conclusion of the award-winning series.

What we know about the Game of Thrones wildlings

Wildlings, also known as the Free Folk, have long inhabited the Westerosi lands to the far north. Separate from the Seven Kingdoms, and therefore out of reach of their rule, the Free Folk are so named for their lack of traditional political authority. The people beyond the Wall bow to no man, even the one they named as their king.

The term “wildling” is used in a derogatory fashion, mostly by the people of the Seven Kingdoms. It references the idea that inhabitants of the far north are wild and untamed, much like the land they inhabit. The Free Folk, on the other hand, mock southerners with the term “kneelers,” or those who kneel before their rulers.

Wildlings take great pride in being free. They used to belong to numerous different clans before uniting behind Mance Rayder, the King-Beyond-the-Wall. Each clan had its own culture of sorts, ranging from structured and civil to vicious and barbaric. These clans engage in near-constant squabbles among themselves. Worshippers pray to the Old Gods of the Forest, kneeling before massive weirwood trees bearing faces carved into the bark.

A devastating number of wildling lives were lost at Hardhome when the Night King arrived. His wights tore into the Free Folk, with only a bare few surviving to board ships with Jon Snow and the Night’s Watch. The others, slaughtered by White Walkers, were resurrected to fight for the army of the dead. With their people exposed in the lands north of the Wall, there are dismally few wildlings left to join the final battle for mankind. Here are the most important remaining wildlings and how they might affect the events of season 8.

Last seen in the final moments of the season 7 finale, Tormund Giantsbane was assumed dead by many viewers. He, along with Beric Dondarrion, fled the crumbling wall as the Night King‘s new mount spewed deadly blue flame upon it.

An unconfirmed cast list was posted by trusted fan site Watchers on the Wall in late February. Both Richard Dormer and Kristofer Hivju, who portray Beric and Tormund, were on the list. The details released were from the first episode of the season, which could mean that all we get is a scene confirming their deaths. Still, the presence of their names on the list gave fans hope that Tormund might survive to see the final battle.

Tormund is a leader in his own right, though his role in the show has mostly been as a loyal follower. His status as a renowned warrior elevated him within the wildling ranks to lead his own warband—many of whom died at the Battle of Castle Black. Little is known of his life before he met Jon Snow in season 1, but in Hardhome, Tormund mentions that he has two daughters. In the books, he has four sons and a daughter, but no sons are mentioned in the series. Some fear his daughters lost their lives at Hardhome. Tormund, however, didn’t take time to mourn, which makes it seem unlikely.

There is also speculation among fans that the “she-bear” Tormund often boasts of bedding was, in fact, Maege Mormont, who is often referred to by that nickname. If that is the case, it is possible that Tormund is Lyanna Mormont’s father, though the connection seems unlikely.

How Tormund can affect season 8

Tormund has repeatedly displayed his fighting prowess. His brutal fighting at the Battle of Castle Black claimed many a brother’s life, and he hasn’t slowed down a bit. He fought savagely in the Battle of the Bastards, and even beat the Lord of Bones to death with his own walking stick. Hardcore.

It is this fighting skill that will make Tormund stand out—if he survives to see the final battle. The burly redhead has already proven himself time and again, but season 8’s battle promises to be more brutal and bloody than any we’ve seen before. On top of that, as of season 7’s conclusion, no one south of the Wall knows that it has fallen. Tormund and perhaps Beric may be the only ones left to carry this news to their allies in Winterfell.

Perhaps more importantly, Tormund could prove very necessary if the living wins the war. Assuming the White Walkers and their army are defeated, the Seven Kingdoms will find themselves in unknown territory. Whoever takes the Iron Throne will have wildlings living freely south of the Wall and will need to find a way to adapt to this new reality. Tormund could prove very helpful as an emissary between the wildlings and the new southern ruler.

The army of the dead

Another possibility that must be considered is that Tormund did not, in fact, survive the fall of the Wall. Kristofer Hivju is in season 8, but that doesn’t necessarily mean that we will see a living version of the red-headed wildling. If Tormund returns to the show as a blue-eyed wight, he will bring with him a whole host of problems.

Without Tormund—and, again, maybe Beric—to warn of the falling of the Wall, our heroes in Winterfell may have no warning of the White Walker’s approach. With no Wall to hold them back, the army of the dead will reach the southern kingdoms much more quickly. That would leave the others relatively unprepared and forced to fight their fallen friends in the final battle. It is all but assured that one of our heroes will be forced to engage their old ally.

Gilly is, in many ways, one of the more tragic characters in Game of Thrones. Born to one of her sister-wives, Gilly was raped by her father-husband Craster for years before her rescue. Upon initially meeting her savior Samwell Tarly, Gilly has just discovered she is pregnant. She pleads with Sam to take her away from what amounts to forced captivity, stressing that something bad will happen to her child if it is born male. She isn’t clear what his fate will be, but Jon Snow discovers that Craster’s male children are sacrificed to the White Walkers.

In season 3, Gilly gives birth to a little boy. When mutinous members of the Night’s Watch turn against Lord Commander Mormont, Sam flees along with Gilly and her newborn. Gilly keeps her child—whom she names after Sam—safe through near-constant threats. She stands up for Samwell on multiple occassions, even indicating her willingness to be raped if it means protecting him.

It is Gilly who discovered that High Septon Maynard annulled the marriage of Rhaegar Targaryen and Elia Martell while perusing the High Septon’s journal. This annulment left Rhaegar free to legally marry Lyanna Stark in Dorne. This makes their child Aegon Targaryen—who we know as Jon Snow—legitimate. Sam ignored Gilly’s discovery for a frustrating amount of time (typical) but eventually realized the importance of her discovery.

Considering Gilly didn’t begin learning to read until meeting Princess Shireen Baratheon, her skill is remarkable. She has difficulty determining the correct pronunciation of certain words and names but shows real aptitude for the craft.

How Gilly can affect season 8

Anyone who argues that Gilly isn’t one of the most resilient characters on Game of Thrones hasn’t been paying attention. Until meeting Sam, she leads an incredibly difficult life. Even after, Gilly’s status as a wildling causes near-constant problems for her, but she perseveres through it all. She is not a capable fighter nor an impressive intellect, but Gilly has consistently contributed to the series‘ plot. She is one of the only people aware of Jon’s true parentage and has displayed remarkable courage at every turn.

If she and Samwell both survive the final battle, it is possible that Samwell—the only surviving Tarly man—will take over as Lord of Horn Hill. Technically, Samwell gave up his titles upon joining the Night’s Watch, but with the Wall’s destruction, nothing is certain anymore.

If Samwell were to become the Lord of Hornhill, it seems his most likely next step would be to legitimize his relationship with Gilly and officially adopt baby Sam. Becoming the Lady of Horn Hill would be a pretty massive status-change for Gilly. If she’s proven anything to us so far, it’s that she’s up to the challenge.

Other Game of Thrones wildlings

There were some Game of Thrones wildlings who managed to escape the slaughter at Hardhome. An estimated 5,000 wildlings survived to settle in lands South of the Wall. All of them agreed to fight alongside Jon against the White Walkers. Most have had minor spots in the show, but that doesn’t mean they won’t end up being important.

One of Gilly’s sister-wives, Morag, and a few of Craster’s other wives survived the attack by mutinous members of the Night’s Watch. She refused Jon Snow’s offer of sanctuary at Castle Black, telling him that she and her sister-wives would find their own way. Their current status and locations are unknown.

At first, Dim Dalba was hesitant to commit his forces to fight with Jon at the Battle of the Bastards. Thankfully, Tormund convinced him by pointing out that without Jon there, would be no Free Folk left. It’s unknown if he survived the battle, but if he did, he will fulfill his pledge to join the final fight.

There isn’t much that baby Sam can contribute to season 8—we think—but he is still a wildling. Plus, in a show full of violence and death, the occasional cute toddler moment can be a wonderful reprieve.