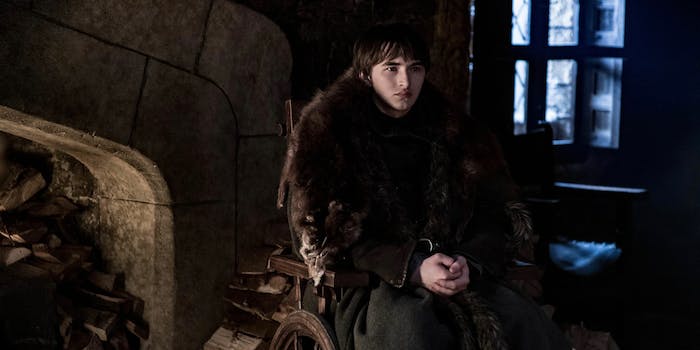 It's worse than we thought.

Warning: This episode contains spoilers for the latest episode of Game of Thrones.

For several seasons, the Night King has been lurking in the shadows, terrifying just about every living person on Game of Thrones. But because he never speaks—and his actions have been largely limited to death, resurrection, and some Wall burning—we didn’t know what the guy wanted until Sunday night.

The reveal comes about midway through the latest episode of Game of Thrones, “A Knight of the Seven Kingdoms,” as the united front at Winterfell reviewed battle plans. After Jon Snow suggests trying to separate the Night King long enough to defeat him as their only option against the Army of the Dead, Bran offered himself up to make that happen.

The others are stunned to hear this, and Jon, Sansa, and Arya are all wary of getting on board with the idea of using Bran as bait even if they eventually agree to it. Bran tells them that the Night King plans to kill him to bring an endless night. But with the battle plans revealed, the long-awaited motive of the creature marching south is becoming clearer.

Bringing the Long Night back to Westeros

The Night King’s venture to destroy Westeros in Game of Thrones season 8 certainly isn’t his first rodeo. He tried it before during the first Long Night, a cold and bitter winter that lasted a generation. (Remember, seasons work a bit differently in Westeros and can last up to several years.) Initially created by the children of the forest to be used as a weapon against the First Men, he turned on his creators and led the children and the First Men to form an unlikely alliance. Thanks to that alliance and the appearance of the last hero to fend them off at the Battle for the Dawn, the Night King and his army were driven north—and the Wall was built to keep them out. Until now.

So far, the Night King had been seldom seen on Game of Thrones; he usually made one, maybe two appearances a season and he’s never spoken a word. But while we remember the Night King by his first encounter with Jon Snow, he gave a far more scathing look toward Max von Sydow’s Three-Eyed Raven.

In A Song of Ice and Fire, the Three-Eyed Raven who Bran meets at the weirwood tree is Brynden Rivers, a Targaryen bastard who had greenseer abilities. But by the time that Bran meets him, Brynden is well over 100 years old. The Night King has been around for thousands of years, so it makes sense that there were other Three-Eyed Ravens before Brynden and Three-Eyed Ravens after him. The very memory of Westeros isn’t restricted to just one person.

We know that the Night King has a personal vendetta against the creatures who made him. But the Night King’s motives go beyond that. He doesn’t want to just destroy his creators. He wants to push the world into darkness once again, an “endless night,” and destroy its memory. And nobody encompasses that better than Bran, a.k.a. the Three-Eyed Raven.

“That’s what death is, isn’t it?” Samwell Tarly asked. “Forgetting, being forgotten. If we forget where we’ve been and what we’ve done, we’re not men anymore. Just animals. Your memories don’t come from books. Your stories aren’t just stories. If I wanted to erase the world of men, I’d start with you.”

Bran’s thirst for knowledge led the Night King to Winterfell

If the Night King existed before Winterfell itself, how could he know exactly where to look as he heads to Winterfell? Thank Bran for that one.

In season 6’s “The Door,” the Night King infamously grabbed Bran’s arm while Bran was in an unsupervised vision, which broke down the magical barriers protecting everyone under the weirwood tree and the Army of the Dead. It didn’t take long for the Night King and his army to swoop in and kill the Three-Eyed Raven, Summer, Leaf, and Hodor. From then on, the brand on Bran’s arm acted like a beacon device, one that alerted the Night King to Bran’s location no matter where he traveled. Their connection is forged even further given that the Night King can break Bran’s skin-changing abilities.

While some fans initially believed that Bran would bring down the Wall because of the mark on his arm last season, the Wall stood for all of season 7. But with Bran on the other side of the Wall, it gave the Night King the drive to finally move south. And by the end of the episode, his generals have finally arrived just outside of Winterfell.

We don’t know for sure if Bran affected the magical barriers on the Wall by crossing it, but we do know that Viserion could bring it down with fire and that Bran was south of the Wall when it happened.

As for the next confrontation between the Three-Eyed Raven and the Night King, Bran has already set up the pieces. He’ll wait in the godswood while Theon Greyjoy and the Ironborn stand near him to fight. Dany’s two living dragons will be nearby to intervene when the time comes.

Could this finally put a shard of dragonglass into the “Bran is the Night King” theory?

In the midst of Game of Thrones season 7, a wild fan theory—even by the show and books’ standards—arose and never went away.

The short version of it was that thanks to his many attempts to stop the Night King through time travel, Bran’s consciousness eventually ended up in the mind of the nameless First Man who became the Night King. It was the kind of twisted theory one might expect to find in George R.R. Martin’s books, even though the Night King is a show invention.

But for many, it never made sense. Bran can’t change the past, and short of Hodor, inhabiting the mind of another human being or a creature would drive him mad. Plus, the Night King has a huge enough effect on Bran that the two can’t even be in the same field of vision without Bran retreating.

Given that we now know the Night King’s motive to destroy the very memory of Westeros, it seems even less likely that the two are one and the same. If Bran was the Night King, why would he be hellbent on destroying himself?