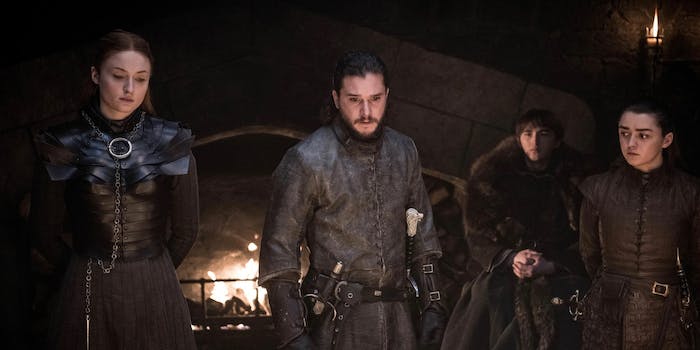 With death in the corner of their eye, they all made the most of what might be their final night.

Warning: This episode contains spoilers for the latest episode of Game of Thrones, “A Knight of the Seven Kingdoms.”

If you knew that only had one night left in this world, what would you do with it? That is, more or less, what Game of Thrones tries to answer in “A Knight of the Seven Kingdoms,” leading to moments of contemplation, big moves, and revelations.

Not a single character died in this episode, a move that’s rare but not unheard of; the last deathless episode was season 6’s “Blood of My Blood.” But the episode continued the character focus that “Winterfell” started, gave us even more reunions, and rewarded the characters, longtime fans of the series, and those invested in some of the show’s romantic pairings.

Parts of it may have felt like fanservice, but as “A Knight of the Seven Kingdoms” demonstrated, there’s absolutely nothing wrong with fanservice when it makes sense for the characters involved and it’s earned. In many of the show’s biggest moments, they more than earned it. And the episode didn’t veer once into King’s Landing, although Cersei Lannister, Euron Greyjoy, and the Golden Company were certainly on the minds of everyone at Winterfell.

The episode ended, like we suspected, with the imminent arrival of the Night King and the Army of the Dead at Winterfell. We’ll have to wait until next week to dissect just how much carnage awaits the characters we’ve spent so much time with, but until then, let’s spend one more night with the living, shall we?

Setting up the pieces of the upcoming battle, which will probably not go according to plan

The living now knows, thanks to some key intel from Jaime Lannister, that Cersei’s army was never coming to Winterfell. With that in mind, they’re finally starting to lay down the tracks for how they plan to defend Winterfell. We’re given a look at just how that looks, so chances of it highly going awry are very likely. You can get even get a look at where everyone might take their last stand thanks to a handy look at a map of Winterfell’s grounds.

Brienne of Tarth—who vouched for Jaime’s life in front of Sansa Stark, Daenerys Targaryen, Jon Snow, and the entirety of Winterfell’s Great Hall—will control the left flank. Both Podrick Payne and Jaime will serve under her, the latter showering her with compliments with absolutely no hint of malice.

Tyrion Lannister will remain in the crypts despite his wish to fight because Dany, who was urged to forgive Tyrion’s foolishness in trusting Cersei last season, was advised to do so by Jorah Mormont. Jorah even advised Dany to offer an olive branch with Sansa, which lasted up until Sansa asked what would happen to the North after they defeat the dead and Cersei. While I know that some fans are already exhausted with the Dany/Sansa storyline, I still find it believable; if they continue with it well beyond the battle of Winterfell, that might change.

Gilly and Little Sam will be in the crypts as well, but Samwell Tarly vouches to fight with his fellow brothers of the Night’s Watch. Jorah will fight with Heartsbane, the Valyrian steel sword of House Tarly (because Sam can’t lift it). Of course, Lyanna Mormont is getting into the thick of the action as well. And even though Ser Davos Seaworth isn’t a fighter, he’ll be out there as well. (Tormund Giantsbane, the Hound, Arya Stark, Gendry, Grey Worm, and Beric Dondarrion are also a given to fight for the living.)

Given the number of nods to how safe the crypts of Winterfell are, how worried about those who are inside should we be?

But the true battle won’t be outside of Winterfell—it will be deep within it. Bran Stark revealed that the Night King’s goal is to kill him because he’s the living embodiment of Westeros’ memory and volunteers to act as bait to draw the Night King out; Theon Greyjoy and the Ironborn will protect him. The dragons will be nearby to interfere when the time comes, and likely, so will Jon and Dany.

The many more reunions that awaited us

The season premiere had a dozen separate reunions within the span of an hour, but “A Knight of the Seven Kingdoms” had its fair share as well. Ghost’s reunion with Jon and the Night’s Watch was more of an afterthought to both remind us that Jon’s direwolf is still alive and that the Game of Thrones CGI budget can finally include him again, but the others offered meatier offerings.

Reunions that were brief last week—Arya and the Hound, Jaime and Bran—got much more screen time this week. Tyrion finally got to see his older brother again, and they both reminisced on Tyrion’s preferred way to go. Tormund reunited with his “little crow” Jon Snow with a hell of a hug, and Arya shared a drink with the Hound. But two of those reunions stood out more than any other.

First up are Sansa and Theon, who haven’t seen one another since early season 6. They grew up together in Winterfell, but they also carried the shared trauma of enduring Ramsay Bolton’s abuse and eventually escaping it together. They were there for each other when nobody else could help them and when all hope seemed lost. They’ve been through hell and back, and at the end of all things, Theon chose to fight for the Starks. It meant the world, and even Dany can see that Sansa and the Starks inspire a level of devotion that she hasn’t been able to with her own followers. A follow-up scene, of Sansa and Theon sharing a wordless moment together over soup, is just as lovely.

And then there’s Jaime and Brienne, whose shared history could fill a book. Together once again, Jaime is in full admiration of the warrior and woman Brienne has become. She stands up for him at his trial, he vows to fight under her command, and when Tormund brought up the idea, he gives Brienne the one thing she’s always wanted. (More on that in a bit.) Even if Jaime and Brienne don’t end up romantically linked before the end, Brienne’s knighting held all of the subtext that we’ll need.

Friends, enemies, and lovers together at the end of the world

“We’re all going to die, but at least we die together,” Tormund noted at the end of the Winterfell war council meeting. He might be right, but as the living wait for the dead to arrive, they each take a chance to live out what might be their last night in their own manner.

Arya initially shared a drink with Beric and the Hound, but she soon left them because she’s “not spending my final hours with you two miserable old shits.” She then found Gendry, who finished the weapon she requested. With the sexual tension building between them for the better part of the past two episodes, Arya interrogates Gendry about his previous experience with other women before she sleeps with him.

“We’re probably going to die soon,” she says. “I ought to know what it’s like before that happens.”

It’s a scene that shows Arya as the character with agency in a world where women don’t often have any—and we know that Arya was never one for tradition, anyway. It also, in its own way, fulfills Ned Stark and Robert Baratheon’s wish to bring their houses together; they just got the wrong Stark and Baratheon (in blood, at least). But if one of them doesn’t make it, they at least had that one night before the end of the world.

Meanwhile, several seasons of Brienne of Tarth mistakenly being called a Ser finally amounted to something. It started off as a slip by Tyrion and led to Tormund questioning why Brienne couldn’t be a knight. It’s tradition, Brienne says (but probably also a mix of patriarchy), but Jaime, sparked by Tormund’s point, remembers that he has the ability to create another knight. And why not Brienne of Tarth? She is just as deserving as any of them.

Although Brienne, like so many other times before, believes that Jaime is fucking with her, he’s deadly serious. And so Jaime knights Ser Brienne of Tarth, who gains the same title as one of her ancestors (who was himself one of the most-respected knights in Westeros and even had four pages to his deeds in the Book of Brothers).

“In the name of the Warrior, I charge you to be brave.

In the name of the Father, I charge you to be just.

In the name of the Mother, I charge you to defend the innocent.

Arise, Brienne of Tarth. A Knight of the Seven Kingdoms.”

Afterward, the soldiers share one more drink and a song sung by Brienne’s longtime squire Podrick. It’s haunting and ominous, one with larger book ties and even lays track for the end of the show. For some of these characters, it might be a final sendoff. If it is, it’s a hell of a way for them to have one final moment of peace.

Jon, however, chooses once again to reflect on his own legacy—this time joined by Dany. He finally tells her about his own parentage after Dany tells him that she never could’ve thought her brother was a rapist. Jon’s reveal is something that she’s initially suspicious about. But the realization soon hits her: Jon has a better claim to the Iron Throne than she does; she doesn’t say much about their own incestuous relationship.

Their time to process that information, however, is cut short. There’s a war coming, and it’s right on their doorstep. We can only hope that this new wedge won’t affect them in the midst of battle.