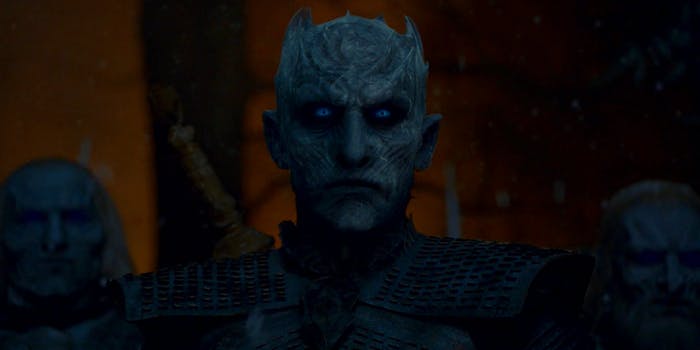 The pieces were there all along.

Game of Thrones set us up for the battle of a lifetime, one that promised plenty of death as the living faced the Night King and the Army of the Dead. And when it was all said and done, the living triumphed because of a girl and a Valyrian steel dagger: Arya Stark, the sociopathic, former Faceless assassin of Game of Thrones, would be the one to take him out.

But as it turned out, we were told of the Night King’s end long before it happened. In the end, the Azor Ahai prophecy only mattered so much—at least for now.

As the battle raged on, the Night King went to Winterfell’s weirwood tree to make his final move: kill Bran Stark, the embodiment of memory in Westeros. He stabbed Theon Greyjoy, who was the last man standing to protect Bran, and then the Night King got ready to slash Bran as he did with the previous Three-Eyed Raven. But before he could do so, Arya jumped in to deliver the final blow.

After she employed the same move she used to end her fight with Brienne of Tarth—dropping her Valyrian steel dagger from her dominant left hand to her right—Arya stabbed the Night King in the gut.

The result is immediate. The Night King shattered, and so do every single White Walker and wight he ever created. After the Night King’s defeat, Melisandre removed her necklace and collapsed on the ground.

The Night King’s defeat was a long time coming. As it turned out, we were told just as much all the way back in 2013—a year before we even met the Night King.

We first had hints that Melisandre might play a role later on in the season only last week. After Gendry gave Arya her new weapon, she asked him about what Melisandre, who she called the “Red Woman,” wanted with him. It’s a scene we’ve talked about largely because it’s when Arya makes the choice to have sex with Gendry.

Melisandre hadn’t been seen since season 7’s “The Queen’s Justice” when she told Varys she was leaving for Volantis. Varys advised Melisandre to stay in Volantis, but Melisandre just smiled.

“Oh, I will return, dear Spider,” she told him. “One last time. I have to die in this strange country, just like you.”

And to that effect, we saw Melisandre’s return a season later in a big way. She enchanted the Dothraki blades so that they were on fire, prayed to the Lord of Light to set a barricade on fire, and when all was said and done, she pushed the would-be savior of Westeros closer to her destiny.

Arya had already witnessed Beric risk her life to save her—his final purpose before he died one last time. Melisandre’s final role in the Battle of Winterfell was to remind Arya of the conversation they once had.

“Brown eyes… green eyes… and blue eyes,” Melisandre reminds her. And to top it off, Melisandre quoted the last thing that Syrio Forel, Arya’s first teacher, said to her to kick her back into action.

“What do we say to the god of death?” Melisandre asked.

Melisandre’s conversation with Arya served to not only jog her memory but also ours.

For that conversation, we have to go all the way back to season 3’s “The Climb,” which aired in 2013. In that episode, the Brotherhood Without Banners—which was led by Beric Dondarrion and Thoros of Myr at the time—sold Gendry, Robert Baratheon’s bastard son, to Melisandre for two bags of gold. Arya met Melisandre around that time, who was intrigued but also a bit disturbed by Arya. For book readers, Melisandre basically stood in for the Ghost of High Heart, a strange and old woman who relayed a series of prophecies at Arya’s feet in A Storm of Swords.

Here, however, Melisandre hinted at Arya’s darkness to come.

“I see a darkness in you,” Melisandre said.“And in that darkness, eyes staring back at me—brown eyes, blue eyes, green eyes. Eyes you’ll shut forever. We will meet again.”

We could have two things going on. One, the show planned something like Arya being the one to take out the Night King so far in advance that it placed that particular line in an entire season before we would even meet the Night King; his first appearance is in season 4’s “Oathkeeper,” which aired in 2014. Or, Game of Thrones got lucky in that it could reference something like that when revealing its checkmate move. Either way, it’s a hell of a way for him to go.

As Arya noted in “The Long Night,” she’s shut a lot of eyes since then. Eyes of all colors. (Even blue eyes in the form of Littlefinger.) Chances are very high that she’ll shut even more eyes in the final three episodes of the series.

But even if Arya does finish her kill list, she’ll never be able to top this. She might have vendettas to fulfill, but after saving the Seven Kingdoms, it’s only downhill from here.