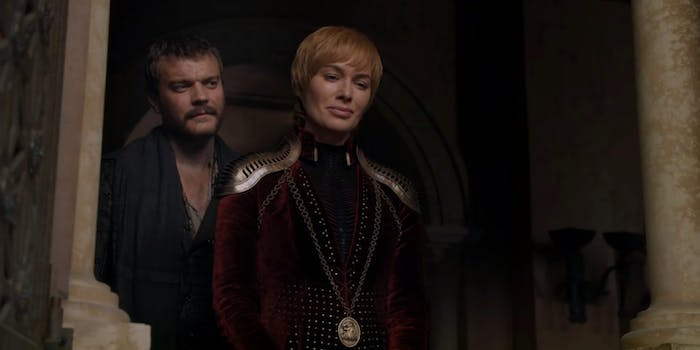 ‘Game of Thrones’ trailer confirms the fates of 2 beloved characters

We lost sight of them at the Battle of Winterfell.

Warning: This article contains spoilers from Game of Thrones season 8.

They won the war. Now what?

After the battle to end all battles filled with unimaginable loss, the living edged a victory after Arya Stark stabbed the Night King with her Valyrian steel dagger on Sunday. But with three episodes left and the Army of the Dead completely wiped out (as far as we know, anyway), the surviving forces are regrouping and potentially turning their attention to the south. In next week’s preview, we catch just a small glimpse of that, along with a couple of confirmed survivors from the Battle of Winterfell.

Even though Cersei Lannister hasn’t been seen in two episodes, she’s been planning. Sure, she didn’t risk any of her men by sending them up north, meaning that the Lannister forces—not to mention the 20,000 members of the Golden Company at her disposal—are probably in better shape than everyone at Winterfell. But they defeated Death himself, and the surviving members are just as much of a threat to Cersei as anyone.

It also quickly establishes that thanks to Daenerys Targaryen’s efforts at the Battle of Winterfell, she’s finally being accepted in the North. We’ll see if that extends to Sansa, who still expressed some doubt in her even as she stayed in the crypts.

But more importantly, it also reveals two characters who survived the battle.

At times, it was tough to follow what was happening in “The Long Night,” so fans initially thought that both Ghost, Jon’s trusty direwolf, and Rhaegal, Dany’s dragon that Jon now rides, had both died in the battle. (Given how much death occurred in the battle, it could’ve gone either way.) But fans need not fear, at least not yet. Both Ghost and Rhaegal made it out of the battle alive, and we can see them for ourselves.

Ghost is visible as the survivors burn the bodies on a pyre, standing just behind Samwell Tarly.

And we see Rhaegal in the air with Drogon as Sansa Stark looks up toward the sky.

But will they survive Cersei? That’s not as much of a guarantee.

The next Game of Thrones episode airs Sunday at 9pm ET.