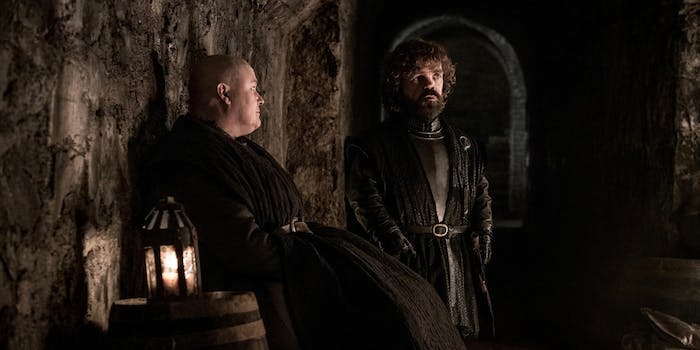 How safe is the ‘safest’ place in Winterfell?

Sh*t is about to go down in the crypts.

The latest Battle of Winterfell on Game of Thrones is nearly upon us, and it’s almost assuredly not going to go how the fighters from Houses Stark and Targaryen hope. They’re fighting the literal Army of the Dead, they’re vastly outnumbered, and their strategy relies on using Bran Stark as bait to lure the Night King—who has a dragon, by the way—away from his forces. But perhaps the biggest threat to the living could come from inside the castle.

While many of Game of Thrones’ remaining characters at Winterfell are going into the battle knowing that they might die, it’s not a task that everyone is up for. Many of Winterfell’s residents aren’t able to fight, so they’ll be placed in the crypts of Winterfell for their protection. Gilly, little Sam, Tyrion Lannister, Varys (based off the Game of Thrones season 8 trailer), that little girl who reminded Davos Seaworth of Shireen Baratheon and wants to fight, and countless women and children are all set to be in the crypts of Winterfell. Bran opted out of staying in there while a promotional photo shows that Sansa is in the crypts at one point. 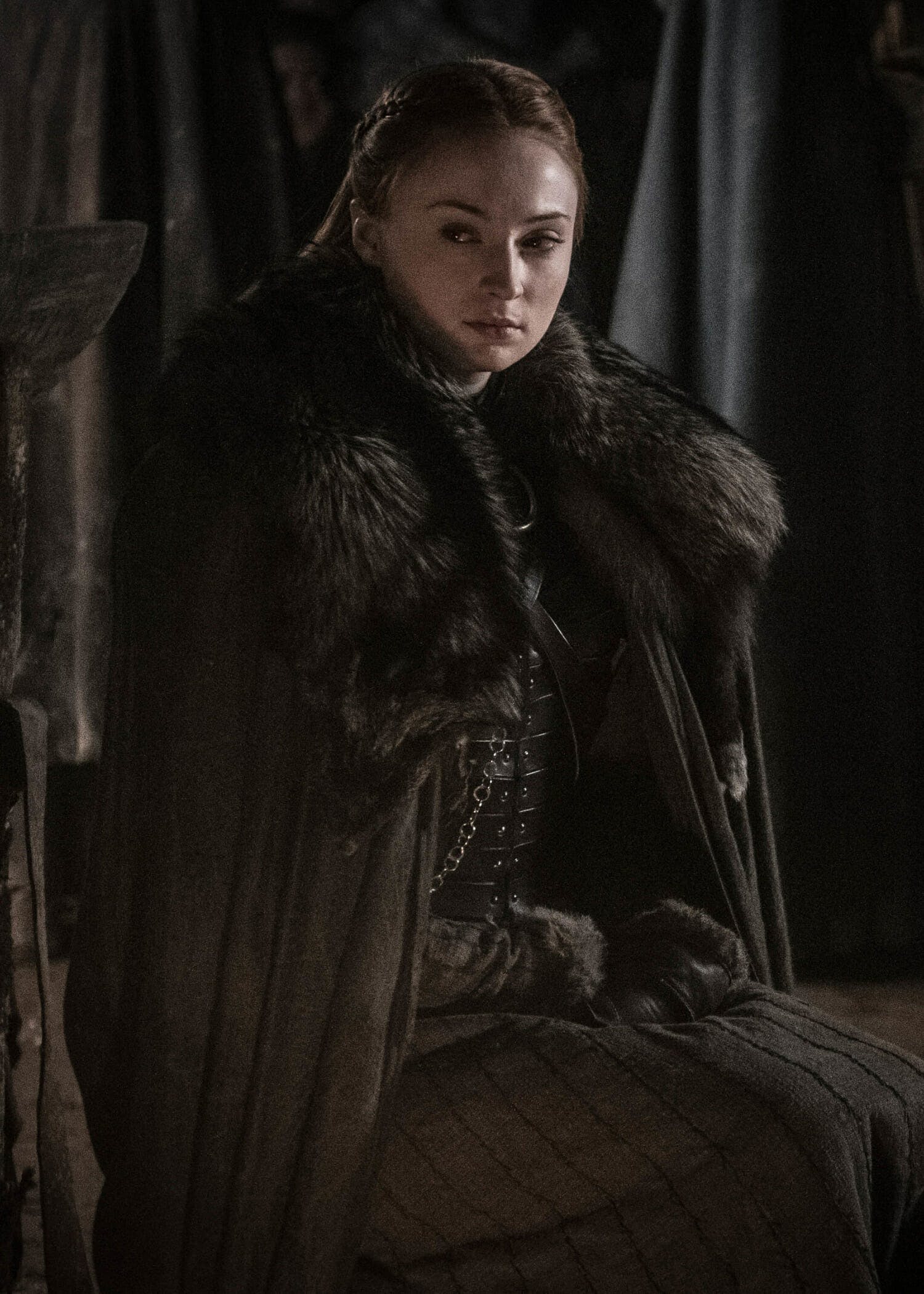 You remember the crypts, of course. We usually see a Stark sibling down there brooding or contemplating the actions of one of their parents at least a few times a season, most recently in the latest episode when Jon Snow told Daenerys Targaryen about his parentage. And if we learned one thing in “A Knight of the Seven Kingdoms,” it’s that the crypts of Winterfell is the safest place in Winterfell. We heard as such enough times that each time it felt less true. Was the show—in a heavy-handed way—trying to foreshadow the fact that the crypts might be not all that safe after all?

I really loved the subtle foreshadowing in #GoT last night.

No place in Winterfell is safer than the crypts.

All the women and children are in the crypts, because of how safe they are.

Nothing will happen to them down there.

The safest place in Winterfell.

The scene at hand, which we briefly catch a glimpse of in trailers, is akin to Éowyn and the women and children of Rohan hiding in the Glittering Caves of Helm’s Deep in The Two Towers. Éowyn and company survived that battle, but they never had the threat of an enemy that can raise the dead while being in a room full of dead bodies. And in-between seeing the first season 8 trailer and “A Knight of the Seven Kingdoms,” there are now a lot of people worried about those dead bodies in the crypts of Winterfell.

The theory, more or less, is that the Night King will pull off a move similar to what he did in season 5’s “Hardhome” and raise the dead. For him, it’s a no-brainer, especially when his forces are likely to kill a lot of Westerosi, Free Folk, Dothraki, and Unsullied fighters. But in doing so, some fans are fearful that the Night King’s power of wight resurrection will also affect the dead bodies in the crypts of Winterfell, which could then attack, kill, and recruit even more fighters. There’s an added level of horror if the Winterfell survivors then find their loved ones turned into wights. Plus, we already know that the White Walkers like to weaponize young children in wight form, so it’s not completely out of the question. (Just picturing little Sam as a wight is a horrifying kind of thought experiment.)

In theory, having the crypts of Winterfell, which is full of Stark lords and Kings of Winterfell, rise from the dead to turn one of Winterfell’s safest places into its deadliest, would be a bold move. It’d put some of the characters we assumed might have been safe (because they wouldn’t be fighting) into the greatest danger. It would be a complete horror show.

It could also be one of the hokier scene executions on Game of Thrones. You could lose the momentum of dread and horror depending on how the deaths and resurrections occurred. Plus, given how long it’s been and who’s allowed to be buried in the crypts, there might not even be any viable bodies to join the Army of the Dead. But that doesn’t mean those holed up inside are completely safe.

If you’re a member of the Stark family and are lucky enough to die of something like old age, chances are you might die near or within the walls of Winterfell. We don’t know how those who worship the old gods prepare their bodies for funerals, but the Starks are then buried in the crypts of Winterfell. Any Stark could be buried in the crypts, but until Ned Stark raised a statue for his sister Lyanna (and brother Brandon in the books), statues were an honor only given to lords and kings of Winterfell. It might not be strictly limited to House Stark: In A Dance With Dragons, Roose Bolton mentions tombs underneath the Dreadfort as well.

For worshippers of the Faith of the Seven, the silent sisters are tasked with preparing bodies for burial. In some cases, that might mean making sure it’s presentable for viewing. In many cases, that means removing flesh from a body; one reason for that might be because a dead body will start to smell, and if you die far from home, that’s a long way to travel with a rotting corpse.

If you’re a member of House Targaryen, the free folk, or a member of the Night’s Watch in more recent seasons, you go with burning. Fire is a Targaryen tradition, but for the latter two, a pyre is a necessity to prevent bodies from joining the Army of the Dead.

Which Starks are buried in the crypts of Winterfell?

Technically speaking, there are countless bodies in the Winterfell crypts. For viewers, only a few of them really matter.

We saw that with Ned Stark’s body. Joffrey kept Ned’s head and put it on a spike after Ned’s beheading in season 1. But as a gesture of goodwill, Tyrion returned Ned’s body to Catelyn Stark in season 2 as he attempted to foster a hostage negotiation with Littlefinger as his proxy. The box that’s given to Catelyn is too small length-wise to fit Ned’s body; it’s likely that the silent sisters reduced his body to bones. Once the Starks took back Winterfell, a carver recreated Ned’s likeness, and Sansa, Arya, and Jon have all frequently paid their respects to Ned’s statue.

Lyanna Stark’s body is also in the crypts. Ned returned her there after she died from childbirth in the Tower of Joy. With the Tower of Joy being located in Dorne, it’s possible that Ned either had Lyanna’s body preserved or reduced to bones for the journey home. And for over two decades, she’s resided in the crypts, something that Robert Baratheon bemoaned when he visited her grave in Game of Thrones’ very first episode.

We don’t know what happened to the bodies of Catelyn or Robb Stark, apart from the Freys desecrating the latter’s body by removing Robb’s head and replacing it with Grey Wind’s. In A Storm of Swords, the Freys dump Catelyn’s body in a river, leading to the eventual creation of Lady Stoneheart. But we doubt that House Frey would ever send it back to Winterfell—and if it had, we can’t imagine House Bolton, which would’ve held the castle at that point, treating their bodies with respect.

Brandon and Rickard Stark were both burned alive by Aerys II Targaryen, and we don’t know if enough of their bodies survived to be returned to Winterfell. (There was also a civil war that was partially sparked by their deaths that immediately followed.) Although we don’t know exactly how long it takes for a body to completely deteriorate in Westeros, it’s probably safe to say that every other dead body in Winterfell is reduced to bones that may or may not be attached.

And then there’s Rickon

Rickon Stark was always the dark horse of the family, even more so than Arya, Bran, or Jon. He was the youngest, wasn’t able to do much during Bran’s trip up north, and then he disappeared from the show for three seasons, only to die unceremoniously at the start of the Battle of the Bastards.

After the battle is won and the Starks take back Winterfell, Jon’s thoughts go back to Rickon, the brother he hadn’t seen in years and then lost once his body is recovered. “Gonna bury my brother in the crypt,” Jon says to Tormund Giantsbane. “Next to my father.”

While we aren’t aware of how much time passes, out of all the bodies underneath Winterfell, Rickon’s is the only one that would be guaranteed; to be fair, skeletal wights exist. And sure, tradition is a powerful thing, but why wouldn’t Jon have just burned Rickon’s body knowing what he does about the Night King?

How the crypts could still be a tomb for the living

Technically speaking, Rickon and those skeletons could rise up next week or beyond. But given that we barely got to know Rickon and just about every other person in the crypts is an ancient ancestor or a pile of bones, the only emotional heartbreak attached to an attack within the crypts is for those who die. There is still a way to have wights in the crypts without it looking cheap or cheesy.

All you need is for at least one person to end up in the crypts and die before the Night King raises more of the dead. Most of the people in the crypts are women and children who aren’t able to defend themselves. (Considering how much of an option “turning into a wight” is on Game of Thrones death pools, it’s very much a possibility.)

So in that, you might have another tragedy on top of all of what we’ll see on Sunday: Not only will some of our favorites die, but they could then turn into zombies and kill their friends.