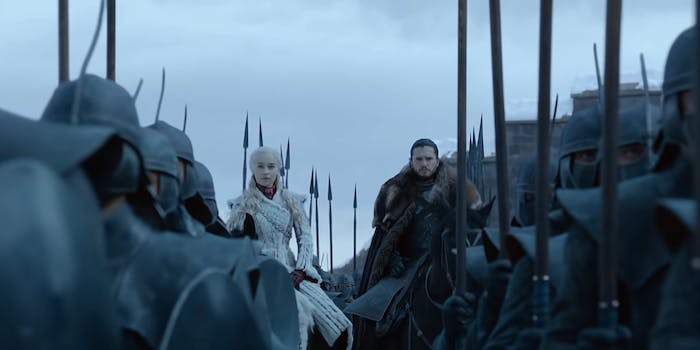 The epic GOT battle took 11 weeks to film.

Game of Thrones finally released a trailer for its highly anticipated season, and one thing is for certain: The Night King and his Army of the Dead are coming for Winterfell.

In fact, it’s one of the few concrete plot points that we know about Game of Thrones season 8, apart from that fact that the majority of the show’s cast will either already be in or arriving at Winterfell at the start of the season. Although the Wall’s destruction isn’t yet common knowledge for the rest of Westeros, it soon will be. And whether it comes from Tormund Giantsbane and Beric Dondarrion (who did survive their encounter with the Night King last season), one of Bran Stark’s visions, or a member of a Northern house even further north, Jon Snow, Daenerys Targaryen, and everyone at Winterfell will soon learn that the Army of the Dead is heading their way. (Thanks to set reports, the latest Winterfell battle is probably the biggest plot point spoiler enthusiasts know about so far.)

This season’s battle for Winterfell is also one of the few things that the Game of Thrones cast and crew are willing to talk about so far in interviews ahead of season 8. A recent Entertainment Weekly cover story teased that upcoming battle, which is said to have “the longest consecutive battle sequence ever committed to film.” According to director Miguel Sapochnik, who’s directing that particular episode, the Battle of Helm’s Deep in The Lord of the Rings: The Two Towers is the only battle sequence that comes close at nearly 40 minutes.

By all reports, filming that battle was particularly grueling. It took 11 weeks to film the episode (which included 55 consecutive night shoots, something that we already knew thanks to a now-deleted Instagram post from assistant director Jonathan Quinlan) and hundreds of crew members working tirelessly in near-freezing temperatures. The episode will reportedly be 90 minutes long if hinting from Sophie Turner is any indication. And it’s the kind of episode that showrunners David Benioff and D.B. Weiss once thought would be impossible to bring to life.

The end result will likely be a spectacle unlike anything we’ve ever seen, one that hopefully has plenty of emotional resonance as our favorites go toe-to-toe with the dead. But in the process, it took the Game of Thrones crew longer to film a fictional battle episode than it did for many real-life wars to completely play out. While we may be familiar with wars that lasted longer than a person’s average lifetime (such as the One Hundred Years’ War, which actually spanned 116 years), we might not be as familiar with the wars that took place in a much shorter length of time—and usually involved more complicated stakes than the living versus the dead.

For comparison’s sake, let’s take the crew at their word. It took 11 weeks, or 77 days, to film the Winterfell battle, which will then play out over a 90-minute episode. Here are 13 wars that flickered out much sooner:

Length: 38 minutes (but Guinness puts it at 45 minutes)

The only war to have started and ended within the reported runtime of Game of Thrones’ Winterfell battle episode, the Anglo-Zanzibar War also holds the Guinness World Record for the world’s shortest war. The war broke out over succession in Zanzibar—which was part of the British Empire at the time and is now part of Tanzania—after Sultan Khalid bin Barghash tried to take control. He didn’t have permission to ascend to the throne (which was required British government approval), and after a deadline sent to Khalid to leave the palace, British forces attacked. Although the war only went on for under an hour, it resulted in more than 500 deaths, Khalid’s escape, and the British placing its preferred candidate on the throne.

The tensions that led to the brief war between El Salvador and Honduras extended beyond soccer and the leadup to the 1970 World Cup—other factors such as land reform, immigration, and propaganda all played roles—but it came to a boiling point after three qualifying soccer matches between the two countries. (Honduras won the first while El Salvador won the second and third matches.) El Salvador had cut diplomatic ties with Honduras between the second and third match, and the war kicked off in full after several El Salvador planes attacked Honduras. Four days later, both sides ran out of ammunition, resulting in a ceasefire. But the ramifications of that war were felt long after the fighting stopped.

One of the numerous conflicts between Israel and its neighboring countries that took place over territory in the 20th century, the Six-Day War resulted in Israel capturing the Gaza Strip, the West Bank, Sinai Peninsula, and Golan Heights.

The relationship between Russia and Georgia had been souring for years, but it led to war after fighting broke out between Georgia and South Ossetia (a Georgian province that has its own form of government), the latter which Russia supported. Abkhazia, another Georgian province, became involved, and a ceasefire was announced just six days later.

The time between Slovenia declaring independence and winning it from Yugoslavia is brief, but what followed is several years of greater war and conflict in the Balkan peninsula as Yugoslavia broke up to form several other countries.

6) Incident at Petrich / War of the Stray Dog

A brief war between Greece and Bulgaria broke out after a dog reportedly crossed the border to Bulgaria and a Greek soldier was shot and killed while attempting to retrieve it. It was another instance of two countries with strained relationships coming to a head, and it took an international intervention to put an end to it.

India and Pakistan have fought against each other several times since the Partition of India created a border between the two countries in 1947. But the 1971 war occurred after Indian forces went to East Pakistan (modern-day Bangladesh) in the midst of Bangladesh’s fight for independence. Vastly outnumbered, Pakistan soon surrendered and it led to the creation of Bangladesh.

A couple of months before the Serbo-Bulgarian War, the province of Eastern Rumelia was unified with the rest of Bulgaria (then still part of the Ottoman Empire). Fearing its own loss of power in the region, Serbia attacked Bulgaria. But just a couple weeks later, Serbian defeat led to the Austro-Hungarian army threatening to attack Bulgaria if Bulgaria didn’t back down. But Bulgaria won anyway: Its new borders were officially recognized, and just over two decades later, Bulgaria would declare independence.

Shortly after the end of World War I, a fight broke out between Georgia and Armenia over the border, which led to hundreds of deaths. Although a ceasefire was called, neither side had a true victory and the territory in question was controlled by both nations.

Greece and the Ottoman Empire fought over Crete, which had been previously been part of several countries but had wanted to join Greece. While the Ottoman Empire won that particular war, Crete eventually became an autonomous state. Just over two decades later, Crete would join up with Greece.

Although Lithuanian historians say the start of the Polish-Lithuanian War happened much earlier, Polish recollection only includes fighting for control of the Vilnius Region and the Sulwalki Region. Poland eventually gained control, and although there was a ceasefire, tensions remained.

Bulgaria, unhappy with what it had obtained in the First Balkan War (which lasted nearly eight months), attacked neighboring countries Serbia and Greece. Not only did Bulgaria fail after multiple other countries intervened, but it also ended up losing part of what it initially gained after the first war ended.

Participants: the United Kingdom and Argentina