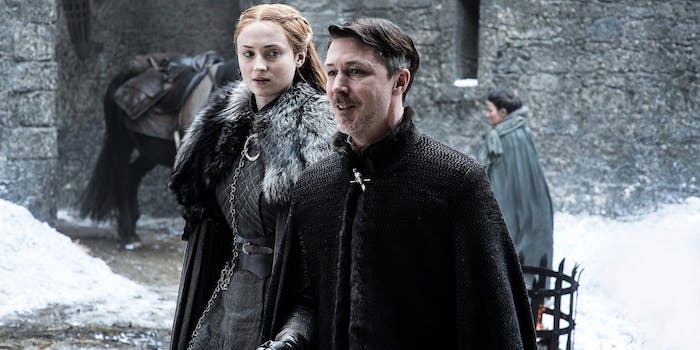 Warning: This article contains spoilers for Game of Thrones seasons 7 and 8.

Update 11:03pm CT, April 28: Game of Thrones planted many, many details years ago that are finally coming back into play. And a weapon that was once used to kill the boy who would become the Three-Eyed Raven would finally put an end to his common enemy.

At the end of “The Long Night,” the season 8 battle episode that brought carnage to the living, it was Arya Stark who took out the Night King. He was taken out with a Valyrian steel dagger wielded by Arya. It’s a moment we were never expecting and an ultimate jaw-dropper: once Arya stabbed the Night King, his entire army was wiped out in an instant.

It was the culmination of several pieces moving at once, but the most important of them all was the re-introduction of that dagger in season 7, a gesture from Littlefinger to Bran Stark, who then gave it to his sister.

That Valyrian steel dagger wasn’t always the obvious weapon of choice to kill the Night King; for one, Daenerys Targaryen has dragons and Jon Snow has Longclaw. To be fair, we had thought it would play a part—but only to take out a meddler.

We first caught a glimpse of that dagger in a preview for “The Spoils of War” as Littlefinger takes it out for display. As This Is Insider’s Kim Renfro pointed out, the sleeve and ring appear to belong to none other than Littlefinger (Petyr Baelish). What’s more curious is the dagger itself. Although we don’t get the best angle of it in the preview, it’s almost certainly the same dagger that a catspaw assassin used in the attempted murder of Bran Stark in Game of Thrones’ second-ever episode.

That blade hasn’t been seen since season 1. Where has it been all this time?

One of the larger mysteries in early seasons of Game of Thrones—apart from “Who killed Jon Arryn?”—was the question of who ordered the catspaw assassin to kill Bran. Bran’s direwolf Summer quickly killed the would-be assassin after Catelyn Stark tried to fend him off. Curiously, he carried a dagger made of Valyrian steel, a rare and valuable weapon he would have never come by on his own. It leads Catelyn Stark to travel to King’s Landing in secrecy to discover more about who tried to kill her son. (In the books, it’s implied that Joffrey Baratheon hired the assassin, but the show has yet to explicitly answer that question.)

Once Catelyn does arrive in King’s Landing, Varys examines the dagger while Littlefinger tells her who owned it. He did, at least until he lost it in a bet against Tyrion Lannister. Littlefinger’s lie led her to arrest Tyrion and put him on trial for his crime in the Eyrie (where he is found not-guilty after winning a trial by combat).

After Catelyn leaves, it ends up in the possession of Ned Stark. The last time we see the dagger it becomes a focal point in a tense conversation between Ned and Littlefinger. Later, Littlefinger puts a dagger to Ned’s neck, although it’s unclear if it’s the same Valyrian steel dagger they just showed.

In the books, this plays out a little differently. Littlefinger takes back the dagger after betraying Ned and shows it to Tyrion as a kind of power move to Tyrion. Despite that extra layer of intrigue, it has yet to play a major part in A Song of Ice and Fire. Though unclear how it returned to Littlefinger in Game of Thrones, it looks as though he gained possession of it once again.

A page in a maester’s book

It’s a nice Easter egg for longtime Game of Thrones fans, but the camera held that page just long enough for fans to start wondering if it would be important later on.

On top of the lingering shots, it appears in a promo for HBO Nordic and showed up on the cover of a magazine with a brand new owner keeping it by her side. These clues suggest it almost certainly has an important role to play.

Arya Stark has the Valyrian Steel dagger used the in the attempt on Bran's life in S1 & I have questions #GameofThrones7 pic.twitter.com/JGyjTMbtCa

Could this be the beginning of the end for Littlefinger?

Littlefinger’s control of the Vale helped Jon and Sansa defeat the Boltons at the Battle of the Bastards last season. But while he was once able to control and ride out the chaos of Westeros with ease, he’s clearly starting to lose his grip.

Sansa Stark hasn’t trusted him in some time, but with each new conversation, she’s starting to lose interest in his words and advice. Jon, who threatened Littlefinger in the crypts of Winterfell, is too much like Ned. Bran just returned to Winterfell, and although he doesn’t want to be Lord of Winterfell, his presence could threaten Sansa’s (and therefore Littlefinger’s) hold on the North. And unbeknownst to them, Arya is about to return to the rest of her pack in Winterfell, and she’d be impossible for Littlefinger to “tame.”

But there could be another piece of evidence residing in Winterfell that could lead to his doom. Upon Maester Wolkan noting that Maester Luwin kept a record of every raven scroll in his archives, Littlefinger turned his head.

It’s unclear just what might be locked away in Luwin’s archives that might cause Littlefinger to worry. Possibly unknown to him, the most important scroll to make its way to Winterfell on the show—Lysa’s letter to Catelyn revealing the Lannisters killed her husband Jon Arryn—was destroyed almost as soon as Catelyn read it. But Maester Luwin witnessed the conversation about its contents and even reminded Ned he swore an oath to Robert Baratheon.

Sansa learned in season 4 that Lysa killed her husband and that she had killed for Littlefinger, but Sansa might not be aware of the role Littlefinger played in the string of events that led to her parents departing to King’s Landing—and ultimately to their doom. Could Luwin have taken notes on what transpired? If that’s the case, what would the Stark children do if they found out? And if there’s something in Luwin’s archives big enough to take Littlefinger down, how far would he go to try preventing that from happening?

Given Arya’s possession of the Valyrian steel dagger as something that will eventually happen, there’s no way it ends well for Littlefinger. Until then, he might have to take his own advice to Sansa.

“Fight every battle, everywhere,” he told her. “Always. In your mind.”