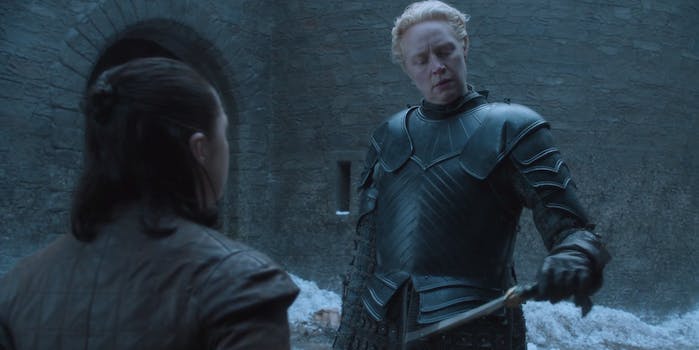 Who would win in a fight? Now we kind of know.

While Westeros has a quite a few badass ladies left these days, only one is something of a legendary swordswoman. But a certain Stark girl just gave Brienne of Tarth a run for her money.

With Arya finally returning to Winterfell on Sunday night’s episode after years away, it was inevitable that she’d run into Brienne, who’s been killing time at the northern castle teaching her hapless squire, Pod, to be a fighter worthy of a title.

The last time Arya saw Brienne back in season 4, she watched Brienne beat the Hound and leave him for dead. Arya certainly hasn’t forgotten that fight, so it’s unsurprising that she quickly sought Brienne out. Of course, Brienne has no idea just how deadly Arya has become.

In fact, the tall, armored swordswoman looks a bit bemused when Arya unsheathes her thin, Braavosi-style blade and asks Brienne to train her. It takes just a moment of sparring for Brienne to realize that though Arya is half her size, the Stark girl is wickedly fast. Watching them exchange blows is a delight—both for the fighters and for the audience. You get the sense they rarely get to test their strength like this against a well-matched opponent, and the difference in their size and fighting-style really keeps you on the edge of your seat.

The match ends up being a kind of draw, with Arya maybe having a bit of an edge with the element of surprise. It’d be interesting to see how Brienne handles her when she knows what’s coming.

Sansa, who quietly watched the mock battle, may be startled by Arya’s deadly talents, but we’re hoping that she doesn’t try to keep Brienne from helping Arya level up her fighting skills—if Arya hasn’t surpassed Brienne already.