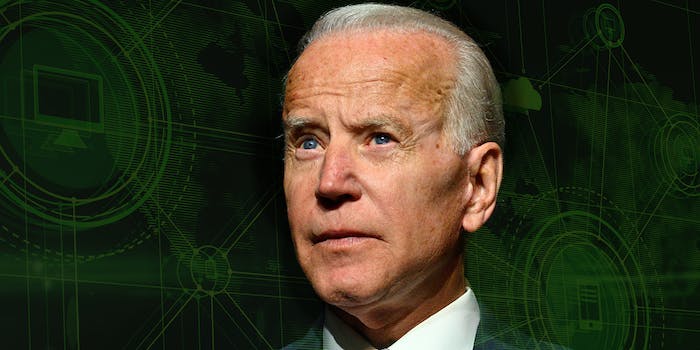 ‘We don’t want to lose any more valuable time’: Biden’s delay on filling the FCC pushes agenda back significantly

There's a long list of things people want to see the FCC tackle. It can't do that until Biden fills out the agency.

President Joe Biden has faced constant pressure to fill out the Federal Communications Commission (FCC) since he took office earlier this year.

But he hasn’t, and now the calls for Biden to fill out the agency are growing louder. Pressure ramped up significantly last week when dozens of advocacy groups pushed the president to “urgently” address the deadlocked agency.

There’s good reason for the latest push—every day Biden continues to leave the FCC unfilled, it pushes back any movement on a number of high-profile items the agency might take up, like restoring net neutrality rules and reasserting authority over internet service providers (ISPs).

The FCC was left in a partisan 2-2 deadlock after Republicans pushed through the nomination of Nathan Simington shortly after the 2020 election. The goal at the time, it seemed, was to keep the agency hamstrung especially if Republicans were able to keep control of the Senate following the Georgia runoff elections.

While Democrats were able to win in Georgia, seemingly paving the way for Biden’s FCC pick to get a nomination and vote, he has yet to give the party control of the FCC. Biden could do that by either naming a fifth commissioner to fill out the agency and elevating Acting Chairwoman Jessica Rosenworcel to permanent chair or nominating a new person to helm the agency.

Biden has taken much longer than past presidents to nominate someone to the FCC. Former President Barack Obama nominated his first chair in March after taking office in 2009. Meanwhile, Trump named former FCC Chairman Ajit Pai to the role almost immediately following his inauguration.

In the immediate months following Biden’s inauguration, advocacy groups pressured Biden to fill out the FCC—but also recognized that the incoming administration was dealing with the coronavirus pandemic and the aftermath of Trump’s administration. It seemed that there were other priorities that needed to be addressed before moving to fill the FCC.

But now, they say, it’s time for Biden to act. Because even if the president put forward a nomination today, its likely that some of the larger items on a Democrat-led FCC’s agenda—like restoring net neutrality rules and classifying broadband under Title II of the Communications Act—likely wouldn’t be wrapped up before the middle of 2022 at the earliest.

It’s not like the 2024 election is around the corner, and the FCC certainly has time to work on myriad matters, but if the Democrat-led FCC wants to accomplish the numerous things advocates are hoping for, it is easy to see that time is quickly becoming of the essence.

“It’s taken an unusually long time and it’s been an incredibly unusual year, I think both of those things can be true,” Matt Wood, the vice president of policy and general counsel at Free Press Action, told the Daily Dot. “It’s taken a long time, but there is still time in this administration … There is still time, but the rule making processes do take some time once you start them.”

Mark Stanley, the director of operations at Demand Progress, one of the many groups that have been pressuring Biden to fill out the FCC, agreed and noted that he believed there was a general sense among advocacy groups that “now is the time” for Biden to make an announcement.

“I think there’s a belief that even with everything the Biden administration has had to deal with, now is the time. We don’t want to lose any more valuable time. Every day that passes that the FCC isn’t able to address some of these critical issues is a day we don’t have a fully fledged FCC to be an empowered advocate for people as opposed to letting ISPs get their way in Washington,” Stanley said. “It’s been a growing call, but it’s been growing louder and louder, and I think that’s what the letter reflects.”

While there is likely time for the FCC to accomplish those goals, the time it will take to begin working on them grows concurrently with each day Biden doesn’t announce a nominee. Because once a nominee is finally announced, the FCC won’t immediately begin checking off a list of items.

A nominee would go through a confirmation process in the Senate, which could take months. That process could also have a newly added wrinkle after Federal Trade Commission (FTC) nominee Lina Khan was named the chair of the agency shortly after being confirmed as a commissioner. That surprise decision reportedly left Republicans upset, which could make a forthcoming FCC nomination get more scrutiny.

After the nomination process, if the FCC decided to restore net neutrality rules and classify broadband under Title II (which is widely expected), that would also likely take months to accomplish.

When the FCC went through its first foray into enshrining net neutrality rules, the notice of proposed rulemaking went out in May 2014, followed by a public comment period, and ultimately was adopted in February 2015.

Assuming those timelines are similar for any potential future net neutrality proceedings, the earliest it could be passed would be late 2022 or early 2023, depending on how long Republicans are interested in drawing out confirmation. Other agenda items would follow similar paths and timeframes.

“These things take some time even once they are launched. So there’s definitely a need to get moving now and soon to accomplish things even as soon as next year,” Wood said.

While there may be a “temptation” to say that the Biden administration doesn’t care about the FCC to explain the slow rollout of a nomination—not to mention his connections to telecom lobbyists in the past—both Wood and Stanley pointed to the president and Vice President Kamala Harris continuously stressing broadband as part of their infrastructure talks.

Biden first unveiled a $100 billion plan for broadband as part of his infrastructure proposal, but the White House lowered that number to $65 billion as an attempt to negotiate with Republicans. Meanwhile, Harris has has compared connecting all Americans to broadband as the rollout of electricity.

But while they may be stressing the importance of broadband and narrowing the country’s long-standing digital divide, there is still a “final piece” that needs to happen to achieve that, Stanley said.

“The Biden administration has done some really great stuff on broadband,” Stanley said. “They are doing and saying the right things on this front in a lot of regards … But in order to make sure we are on the path to make sure that broadband access is available for everyone, the final piece of that, or an important piece, is a full FCC. It’s an extremely important part of the Biden administration’s goal. So a lot does hinge on it.”