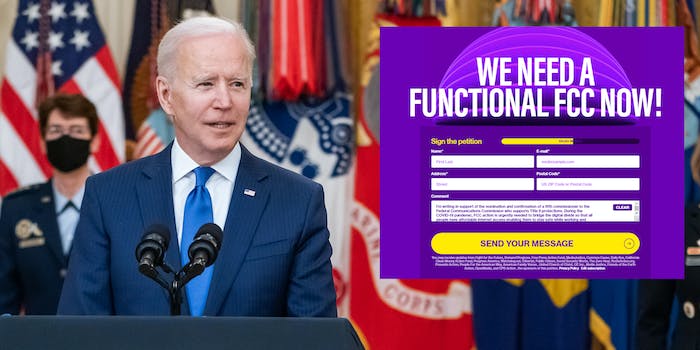 Biden continues to face pressure to fill out the agency.

More than 100,000 people have joined a push by numerous advocacy organizations urging President Joe Biden to fill out the Federal Communications Commission (FCC) with someone who does not have ties to the telecom industry and would support reinstating net neutrality rules.

Last month, a coalition of more than 20 public interest and tech advocacy groups relaunched the Battle for the Net website, which has long been used in the past as a hub for net neutrality advocacy.

The website urged internet users to sign a petition demanding that Biden choose a fifth FCC commissioner who doesn’t have ties to the telecom industry and would support reinstating net neutrality.

As of Thursday, the groups said more than 100,000 people have signed onto their petition and hundreds of tweets have been sent in support of the effort. The advocacy groups involved with the Battle for the Net effort—which include Fight for the Future, Free Press Action, Demand Progress, Public Knowledge, MediaJustice, and more—are also hosting an AMA on Reddit today to discuss the efforts.

“These 100,000+ actions should make one thing absolutely clear to the Biden administration: We will not abide another Ajit Pai whose goal is to make Verizon and Comcast happy. People are watching and expect the president to nominate someone who will fight for them at the FCC, who will reinstate net neutrality, and will ensure broadband access for all,” Caitlin Seeley George, director of campaigns and operations at Fight for the Future, said in a statement.

The FCC is currently deadlocked in a 2-2 partisan tie, with Biden having the ability to nominate a fifth commissioner who, once confirmed by the Senate, would give Democrats a majority at the agency. That majority would allow it to vote on what are likely partisan issues, like restoring net neutrality under Title II of the Communications Act.

Biden has faced increased pressure to nominate the fifth commissioner from advocacy groups and tech companies, but now, according to the advocacy groups, that pressure is also coming from more than 100,000 people online.

“It’s now time for President Biden to ensure the Federal Communications Commission, which oversees the broadband market, is fully staffed and prepared to fight on behalf of the public instead of siding with the telecom industry,” Mark Stanley, director of operations at Demand Progress, said in a statement.

“Recent years have shown the public is prepared to engage in massive online activism to ensure a free and open internet. Activists are watching and have made clear they expect a public-interest minded nominee to the FCC. We urge the Biden administration to listen to these voices and quickly nominate a commissioner who will help restore Title II open internet protections and ensure affordable high-speed internet access for all.”

In January, a number of groups wrote to the Biden administration and Congress, noting that the FCC needed to be filled so that “critical efforts are not stalled in a deadlocked FCC” and the lack of a majority leaves the agency “impotent to pursue the bold action required at this time.”

Last month, Mozilla and other tech companies also sent a letter to the FCC urging it to restore net neutrality once the agency is filled out.

Restoring net neutrality has been expected under a Biden administration. Acting FCC Chairwoman Jessica Rosenworcel, who Biden nominated to the acting role in January, has long voiced her support for the rules and opposed the repeal of them.

Meanwhile, members of Congress have signaled that they plan on introducing a bill that would codify net neutrality rules. Previous attempts have stalled in the Senate, but with Democratic control it may have an easier path to passing.