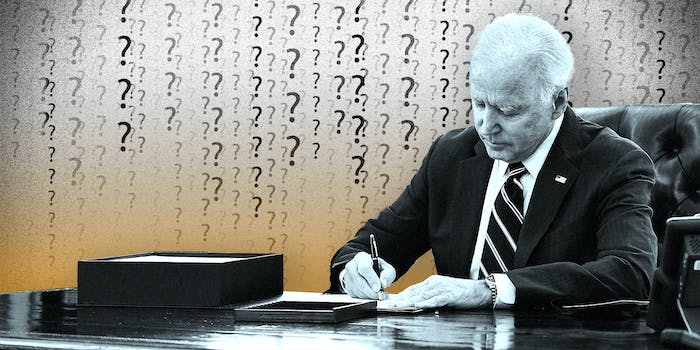 The FCC is deadlocked. When will Biden finally fix that?

Biden has moved slower than his predecessors in filling out the agency.

Since taking office, President Joe Biden has faced consistent pressure to nominate someone at the Federal Communications Commission (FCC) to either fill out the five-person agency or become the permanent chair.

But despite that push from advocacy groups and more than 100,000 people online, they have watched as Biden has nominated people to other federal agencies like the Federal Trade Commission (FTC), leaving the FCC without the ability to tackle issues that need a Democratic majority to move forward.

While the administration has spent a significant portion of its first few months focusing on the coronavirus pandemic, advocates agree that now is the time to get the FCC fully functioning.

“This really is truly an administration that is starting in the midst of a crisis and, I think, has rightly been focused on the pandemic in particular, and got something of a late start with the Senate. So there’s some reasons for delay that are understandable, and yet: The FCC can’t make any real policy without five commissioners,” Craig Aaron, the co-CEO of Free Press Action told the Daily Dot, adding: “Every delay in naming who you’re going to put forward for these jobs, pushes the whole agenda back.”

Aaron added: “I don’t think people have reached the point of anger at all, but I know there’s definitely a collective eagerness. There’s a lot to be done.”

When he took office, Biden inherited an FCC that was in a 2-2 partisan deadlock after Republicans jammed through former President Donald Trump’s nomination of Nathan Simington and former Chairman Ajit Pai stepped down on Inauguration Day.

By quickly confirming Simington—who faced a heap of criticism—Republicans seemed to hope that they could keep the FCC in a 2-2 partisan tie if they retained control of the Senate, which confirms presidential nominees. At the very least, a Republican Senate could drag out confirming Biden’s pick.

That gambit failed when the Georgia elections gave Democrats control of the Senate, spurring advocates to push Biden to make a “bold” choice for the FCC. However, Biden doesn’t seem pressed to push on it.

Since then, Biden has only named Jessica Rosenworcel, a Democrat, as the acting commissioner of the agency. There’s been rampant speculation as to who Biden might pick to either permanently lead the FCC or who could be named as the fifth commissioner, but nothing announced.

A 3-2 Democratic majority isn’t insignificant. With that majority, the FCC could tackle a number of issues that would face a party-line vote, such as restoring net neutrality rules and classifying broadband under Title II of the Communications Act.

That slow nomination process hasn’t gone unnoticed, with pressure mounting almost weekly on the president to finally make a pick.

Just last week, a coalition of tech advocacy groups announced that more than 100,000 people signed a petition calling on Biden to pick someone for the FCC without telecom ties and who supports restoring net neutrality rules under Title II of the Communications Act.

Before that more than 30 advocacy groups called on the administration and Congress to fill the agency swiftly, saying that leaving the agency “impotent to pursue the bold action at this time would be a serious failing.”

Chris Lewis, the president and CEO at Public Knowledge, said the advocacy group signed onto efforts to push Biden to fill out the agency because they felt there was a sense of “urgency.”

Lewis echoed others in noting that the administration was dealing with other issues like the pandemic immediately after taking office, but the time has come for Biden to make his nominee known.

“There’s a great amount of work to do to make sure broadband is affordable, accessible to everybody, open, and reliable,” Lewis said. “You can’t do that without an agency that has actual authority to protect consumers over broadband. And right now, since 2017, the FCC does not have authority. It repealed its own authority. The great news is they can restore it if they want to. But you’re going to need five commissioners to do that—it’s clear. So there needs to be a sense of urgency there.”

But it’s not just a sense of things moving slower: Biden isn’t moving as quick as past presidents to fill out the FCC, perhaps because of the focus on the pandemic. Former President Barack Obama nominated Julius Genachowski to become the chair of the FCC in March 2009. Meanwhile Trump picked Ajit Pai to be the chairman days after his inauguration in 2017.

Biden has actually been slow to solidify a slate of somewhat related positions that would likely factor into tech policy including: deciding whether to make acting FTC Chair Rebecca Slaughter the permanent chair—although he has nominated Lina Khan to be a commissioner at the agency—and a Department of Justice antitrust spot.

But each passing week without a nomination from Biden pushes back any potential action the FCC can take. After getting nominated, the pick will have to be confirmed by the Senate. For reference, Genachowski was nominated in March and confirmed in June 2009.

After that, the agency will have to settle in, and if they wanted to take action—for instance, restoring net neutrality—there would have to be an initiation of a rulemaking process, and a period of public comment before a vote even takes place.

Essentially, it’s a long road for any “bold” policymaking. That timeline, advocates say, makes it even more important Biden makes a pick quickly so the agency can get to work.

“There’s an understanding of the work that’s been necessary to deal with these crises. I do think we are at a point where it is important to fill the FCC quickly. It’s not just a matter of doing this quickly. It’s extremely important the right person is chosen,” Mark Stanley, the director of operations at Demand Progress, told the Daily Dot. “I think with each day and each week that goes by, there is a cost to not having a full FCC.”

Stanley noted the more than 100,000 signatures Battle for the Net has received on its petition demanding Biden fill the FCC with someone without telecom ties shows that people are invested in who the president ultimately chooses.

“When it comes to net neutrality and open internet protections in general, obviously the public has mobilized en masse in the past,” Stanley said. “There is hope Biden is going to pick a good nominee and do it, hopefully, soon. If the nomination continues to be delayed and delayed, I think you’re going to see the public getting to a place where they are willing to mobilize even more and speak out even more. That’s especially true if were a bad nominee.”

Despite the slow roll, there does seem to be some optimism surrounding who Biden might ultimately pick. Tech advocates pointed to Khan’s appointment at the FTC and Tim Wu, who coined the term “net neutrality,” being picked to serve on the National Economic Council as reasons they believe Biden will choose someone at the FCC who is similar.

Biden’s recent infrastructure proposal, which allocates $100 billion for broadband initiatives, has also signaled to advocates that Biden will make a solid pick for the agency.

While Biden’s other picks have given advocates a reason for optimism, the president’s past ties to the telecom industry still are “undoubtedly” part of the vetting process, Aaron said.

Biden’s first fundraiser after announcing his bid for the presidency was with David Cohen, a well-known former Comcast executive.

“Undoubtedly, that has to be a factor in any vetting. I will say, so far, some of the appointments—whether it’s Tim Wu going to the White House or Lina Khan going to the FTC—these are public interest appointments, these are not people with deep corporate ties,” Aaron said. “Our hope and expectation is that these key FCC jobs are going to be filled by people with a similar record of independence.”

Lewis said that there were several names that would “satisfy what we’re looking for” that have been rumored to be under consideration for the FCC.

“I’m looking for leadership at the chairman level and other commissioner seat from people who are willing to make bold decisions based on what we know is needed. Bold action is necessary,” Lewis said. “It’s time for folks to remember that this is important work.”