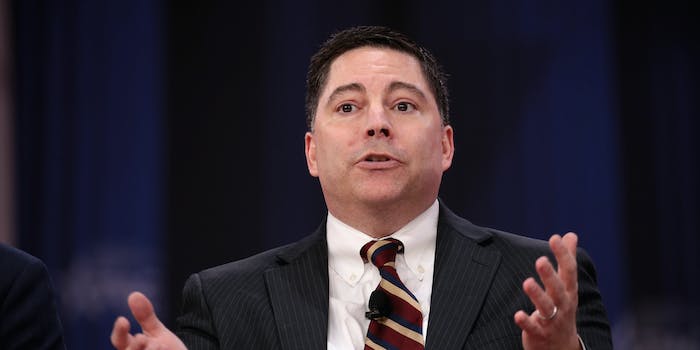 Biden's delay is getting even more attention.

Former Federal Communications Commission (FCC) Commissioner Michael O’Rielly, a Republican, recently said he was “perplexed” as to why President Joe Biden has taken so long to finalize the makeup of the agency.

Biden has been historically slow in finalizing the makeup of the FCC. When he took office, he inherited a 2-2 deadlocked agency along party lines. Biden, as president, has the ability to name a chair of the FCC, which is supposed to have five members, and nominate commissioners who are confirmed by the Senate.

But so far, he has only named Jessica Rosenworcel, who was already on the agency, to be the acting chair—leaving the FCC in the 2-2 deadlock. Biden has faced constant pressure from advocates, public interest groups, and others to fill out the FCC, either by naming Rosenworcel the permanent chair and nominating a fifth commissioner or by nominating someone else to become the chair.

That delay, which has been pointed out numerous times over the last several months, has pushed back any agenda items that Democrats want to see happen—such as restoring net neutrality rules—because they would almost assuredly take a 3-2 vote.

If Biden does not nominate someone soon, he risks the agency falling into Republican control. Rosenworcel’s term technically ended last year, but rules allow her to stay in the role until the “the expiration of the session of Congress that begins after the expiration of the fixed term,” which would be January 2022.

O’Rielly served on the FCC from 2013 to 2020. Former President Donald Trump withdrew his re-nomination to the Senate shortly after he raised concerns over Trump’s social media executive order that targeted Section 230 of the Communications Decency Act. That executive order was eventually revoked by Biden.

During a recent 6G event, O’Rielly spoke about Biden’s delay, and essentially endorsed Rosenworcel as the permanent chair.

In a tweet where he shared a clip of his remarks, he said he was “completely perplexed by the situation.”

“I say this in all honesty, when I look at the current makeup and the current acting chairwoman—who is a friend of mine—there could be no greater progressive mindset, and liberal activist, than Jessica Rosenworcel. She embodies those visions and principles, and I respect her for those. I don’t agree with her on many of those, but you have somebody who actually knows the substance and actually can carry forward and make the agency work for those purposes.”

“I find it ironic, from the other side, I’d love for this administration to pick some newbie that hasn’t been involved in these issues. I just think it would set them back a couple years. From a practical perspective, I appreciate that. I don’t understand the hesitancy on someone so committed and focused on the issues. Again, I’m working against my own interests. I don’t have any conversations with this current commission, as my ethics prevent me from doing so … I’m shocked at where we are, I just don’t understand why someone so capable for the vision and also the activities, is being set aside.”

While advocacy groups have been pushing the president on his FCC pick for months, pressure is once again beginning to mount.

Two weeks ago, a group of senators urged Biden to name Rosenworcel the permanent chair of the agency “as quickly as possible.”

“I think it’s troubling, and I have publicly, repeatedly, called on the administration to name a chair, and I continue to support the acting chairwoman and I think she would be absolutely superb,” Eshoo said. “It’s a very important position, the FCC should not be left without a permanent chair being named.”