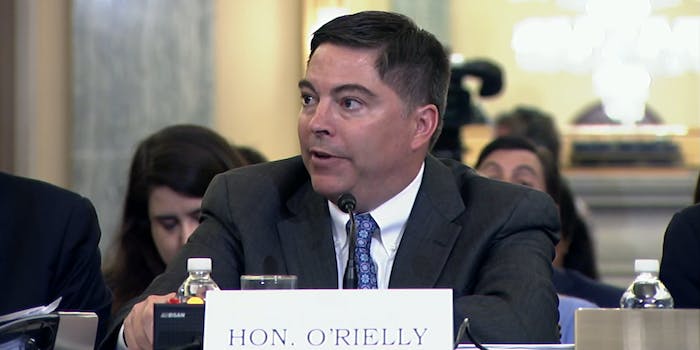 The White House did not make any comments about the decision to withdraw O’Rielly’s nomination.

However, in June, O’Rielly said that he had “deep reservations” about the FCC’s authority to carry out what is directed in Trump’s social media executive order during an interview on C-SPAN.

Trump’s order, which is facing a legal challenge alleging it is unconstitutional, asks the FCC to “clarify the provisions” of Section 230 of the Communications Decency Act.

Section 230 shields websites from being liable for what is posted on them by third-parties and has been called “one of the most valuable tools for protecting freedom of expression and innovation on the internet.”

During the interview, O’Rielly cast doubt on the FCC’s authority to clarify Section 230 but also hedged his bets by saying he wanted to speak with “knowledgeable people” to see if Congress “intentionally” or “accidentally” gave the FCC authority.

O’Rielly’s term expired in June 2019, and Trump renominated him for a new five-year term in March. His term would have had a backdated start date of July 2019 if he were confirmed by the Senate.

O’Rielly’s renomination was already on hold by Sen. James Inhofe (R-Okla.) over a recent FCC vote to allow Ligado to use spectrum despite push back from the Department of Defense, according to Satellite Today.

O’Rielly was once found to have violated the Hatch Act for saying people needed to “make sure that President Donald Trump gets reelected” at CPAC in 2018.