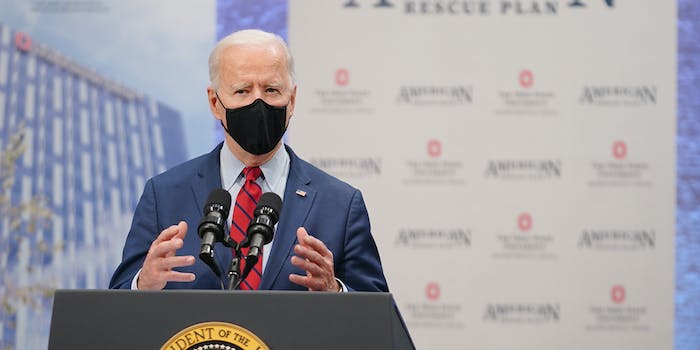 Trump’s executive order, which he signed last May, directed a section of the Commerce Department to petition the Federal Communications Commission (FCC) to “clarify” Section 230. Trump signed the order after Twitter fact-checked several of his tweets.

The former president became fixated on the law, which shields all websites from being liable for what users post on them, as his presidency ended.

The executive order was vehemently criticized at the time. It also faced a lawsuit from a consumer advocacy group that argued it was unconstitutional.

Despite this, the former president pushed ahead with the controversial order. Trump also revoked the nomination of Michael O’Rielly, a Republican FCC commissioner who raised concerns about the authority the agency had to actually carry out the order. Trump replaced O’Rielly with a candidate, Nathan Simington, who had connections with crafting the executive order. Simington was later confirmed by the Senate despite vocal outcry.

In October last year, former FCC Chairman Ajit Pai agreed to move forward with Trump’s executive order after the agency collected public comments on it (which were flooded with automated messages decrying alleged censorship of conservatives).

In late January, Pai admitted that the agency would not act on Trump’s order. Pai told Protocol at the time that “given the results” of the 2020 election, there was “simply not sufficient time to complete the administrative steps necessary in order to resolve the rulemaking.”

The group that sued the Trump administration over the order, the Center for Democracy and Technology (CDT), said in a tweet that they welcomed Biden’s decision.

“As we have consistently argued, President Trump’s Executive Order was an attempt to use threats of retaliation to coerce social media companies into allowing disinformation and hateful speech to go unchecked,” said Alexandra Givens, president and CEO of CDT, said in a statement. “The Biden Administration has rightly rejected this deeply flawed approach. We applaud the timely decision by President Biden to fully repeal this unconstitutional order.”