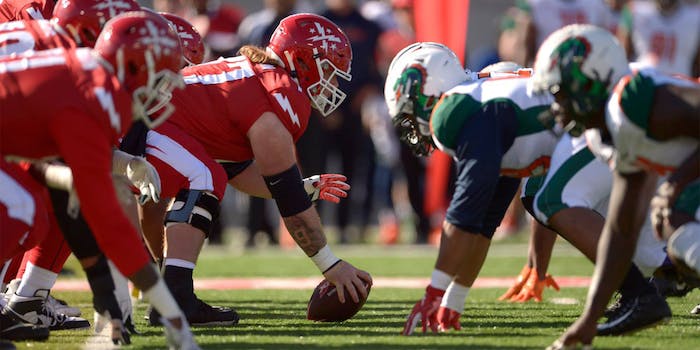 How to live stream the XFL

Already missing the NFL? The XFL's here to fill the void.

The XFL is back! Originally launched in 2001 as a WWE venture, the league was a short-lived, gimmick-filled alternative to the NFL that didn’t quite take off. The 2020 version, with WWE CEO Vince McMahon heavily involved, features eight teams taking what a league press release calls “a 79-day sprint from kickoff to the championship game.”

What is the XFL?

The XFL website calls the league “a brand-new, fan-first league that’s reimagining the game of football and offering fans an opportunity to experience more action, access, and fun.” Though obviously not on the level of the NFL in player talent or marketing prowess, you’ll recognize some of the names associated with the new-look XFL. Longtime Oklahoma coach Bob Stoops is heading up the Dallas Renegades, Seattle Seahawks legend Jim Zorn is serving in a dual role as the Seattle Dragons coach and GM, and NFL and college football coaching veteran June Jones is at the helm in Houston for the Roughnecks (whose logo looks like the Oilers logo and Texans logo had a baby).

You also might recognize names like Cardale Jones (an Ohio State standout), Aaron Murray (who played his college ball at Georgia), and Matt McGloin (a walk-on-turned-starter at Penn State) among the league’s starting QBs.

How to live stream the XFL 2020 season

The new league has created quite the TV package for itself, partnering with ABC, ESPN, ESPN2, Fox, FS1 and FS2 for its 10-week season and playoff schedule. There are a number of streaming services that allow you to access most if not all of those channels.

If you’re a sports fan, though, it will appear tailor-made for you, with NBA TV, NFL Network, and a whole group of channels showcasing both kinds of football. It’s got NBC for Sunday Night Football, NBCSN for Premier League matches, 10 beIN SPORTS channels for La Liga and Ligue 1, FS1 and FS2, UniMás, and Champions League action via TNT all on tap. If you can’t watch a match live, FuboTV offers a three-day replay for each match and 30 hours of cloud DVR. (Check out the complete FuboTV channels list.)

AT&T TV Now provides instant access to more than 45 channels, including local channels, at its minimum, but includes numerous package choices that rival cable options in size. For sports fans, that means ESPN and ESPN2 for its array of soccer and other sports programming, NBC as well as NBCSN for Premier League action, Fox as well as FS1 and FS2 for XFL, MLS, Bundesliga, the U.S. men’s and women’s teams, and even Liga MX offerings. It even offers free HBO on its Plus and Max channel suites. The $5 Deportes add-on gives access to ESPN Deportes, TUDN, Fox Deportes, Gol TV, and TyC Sports for even more soccer. And if you need to record any action to watch later, it comes with CloudDVR for up to 20 hours of TV recording per month. One account works on two devices, but you can add more devices for only $5.