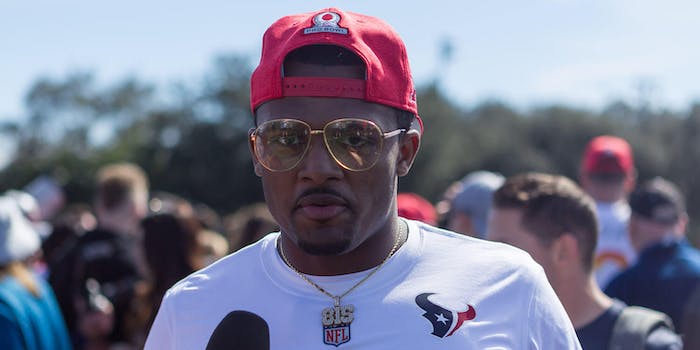 How to stream Texans vs. Chargers in NFL Week 3 action

Two strong offenses will look to get back on track after shaky starts.

The Houston Texans and the Los Angeles Chargers both showed great promise heading into the season. Now is the time to live up to expectations.

Last week, the Philip Rivers-led Chargers lost to the Detroit Lions after failing to get into the end zone in the second half. Though Rivers had a decent day, throwing for almost 300 yards, his costly pick and his failure to throw even one touchdown pass cost the Chargers the game.

Though the Texans squeaked out a victory against the Jaguars in Week 2, the vaunted Houston offense looked limp. Deshaun Watson threw for only 159 yards, and a Jacksonville team led by a backup quarterback almost took the game from them.

This week, both teams will look to rebound and get their offensive production back on track. If not for a fourth-quarter strip sack by the Houston pass rush, the Texans could have lost last week. Carlos Hyde ran decently, but everyone else on offense, from running back Duke Johnson to star receiver tandem DeAndre Hopkins and Will Fuller, failed to produce.

Though the Texans defense deserves credit for holding the line, the unit fell apart on a fourth-quarter drive demonstrating that Houston’s D could stand to improve as well.

Poor tackling and defensive injuries hampered Los Angeles as they let decent offensive production turn into a crushing loss. In particular, terrible cornerback play has allowed opponents to stay on the field and drain offensive opportunity from this Chargers team.

There are a number of options for watching Texans vs. Chargers on streaming platforms that carry CBS. However, consult a coverage map to see what game your regional channel will be playing.

Texans vs. Chargers live stream: How to watch NFL online

Texans vs. Chargers: Why it matters

Early in the season, teams have time to make adjustments. But, those fixes have to happen fairly quickly. Both of these teams need to get better on both sides of the ball.

The big thing for the Texans in offensive consistency. Deshaun Watson has to show up every week if Houston is going to make a deep playoff run. It’s simple: If Watson can’t throw enough good passes, it doesn’t matter how well his receivers play.

If the Chargers defense can’t get off the field, their production on offense won’t be good enough. LA’s awful secondary is going to need help up front from stars like Melvin Ingram and Joey Bosa in order to limit yardage and give Philip Rivers the opportunities he needs.

While much of the league is solidifying for good or ill, these teams’ futures are still up in the air. Will the Houston and Los Angeles offenses play up to their potential? Can their defenses firm up enough to give their teams a chance to win?

This could be one of the most exciting games of the week, as two teams filled with potential will be fighting to live up to expectation. While the winner could gain some serious momentum, the loser could find themselves on the path to regular season irrelevance.