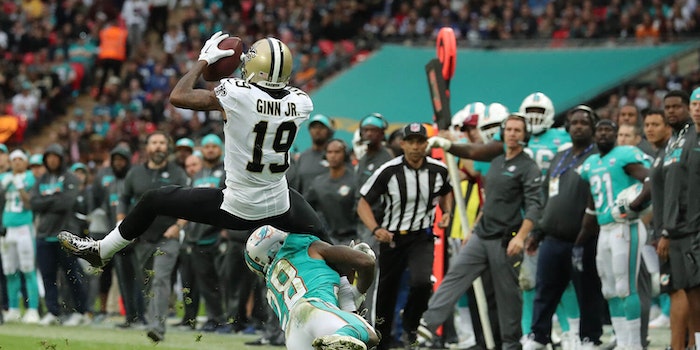 How to stream Saints vs. Seahawks in NFL Week 3 action

How will the Saints fare with Drew Brees out?

Who are the Saints without Drew Brees?

The New Orleans Saints star quarterback will undergo surgery on this throwing thumb and is expected to miss approximately six weeks of football. Without Brees, what looked like a winnable game against a surprisingly soft Seattle Seahawks team now feels just out of reach.

If Teddy Bridgewater is going to succeed in relief, or at least post a couple wins in Brees’ absence, other things are going to have to go well. Last week, they didn’t. The Saints defensive line has been shaky. Tight end Jared Cook has underwhelmed. Against the Rams, New Orleans racked up 11 penalties.

The usual shining stars for the Saints also came up short last week. Playmakers like Alvin Kamara and Michael Thomas didn’t produce at their usual level without their old general on the field.

On the bright side, all of this happened against a strong Rams team and while the Saints were adjusting to the shock of losing Brees. Perhaps, against a soft Seattle team, things will be different.

Yes, the Seahawks are 2-0, but it is about the weakest undefeated start imaginable. Seattle has squeaked by an awful Bengals team and a narrowly edged out a Steelers team reeling from the loss of Big Ben for the season.

While the Seahawks once again enter a favorable matchup against the Brees-free Saints, it’s not hard to imagine this team finding a way to lose.

Thus far, quarterback Russell Wilson has played well, and receiver D.K. Metcalf has come into his own. But, that connection has masked some weaknesses on this Seahawks squad. Chris Carson has had three fumbles in two weeks. The offensive line looks bad. The defense almost let Mason Rudolph come back against them.

This Seattle team could be a paper tiger.

There are a number of options for watching Saints vs. Seahawks on streaming platforms that carry CBS. However, consult a coverage map to see what game your regional channel will be playing.

Saints vs. Seahawks live stream: How to watch NFL online

Saints vs. Seahawks: Why it matters

You have to give the Seahawks the edge in this game, as Russell Wilson is great at finding a way to win against weaker opponents. With the Cardinals coming up in Week 4, Seattle could start 4-0 before their schedule takes a tougher turn.

A victory for the Seahawks isn’t a sure thing. Teddy Bridgewater has started games in his career and he often posted decent enough numbers before the Vikings parted ways with him. With a supporting cast this strong, it’s not hard to imagine the Saints grinding out a couple of wins in Brees’ absence.

While the Saints have a more talented roster overall, they are likely going to have to play very well and avoid mistakes if they want a victory here. By contrast, this Seattle team has shown they can have a messy moment here and there and rely on Wilson’s passing and Pete Carroll’s coaching to bail them out.

If Seattle wins here, they will remain competitive in the NFC as their schedule toughens up. If the Saints can find a path to victory, New Orleans might just survive Brees’ absence.

Though this is an early-season game, this matchup has the feeling that it could help either team keep their hopes alive, and set them up for a stronger road to the playoffs.