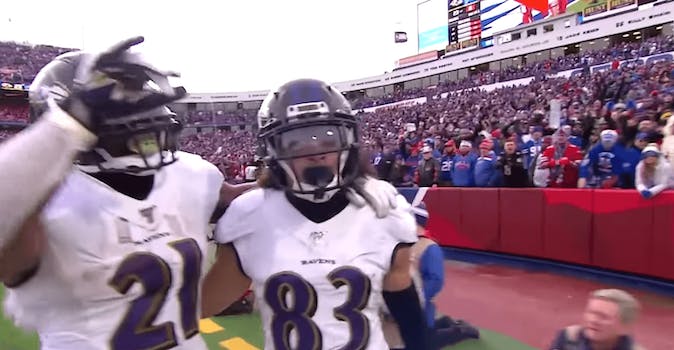 How to stream Ravens vs. Jets, the last Thursday Night Football of the season

One of the league's best teams matches up with one of the worst.

It’s hard to imagine a more lopsided matchup this season than the Baltimore Ravens vs. the New York Jets.

This year, the Ravens have redefined the quarterback position, creating a kind of hybrid rushing and passing player in Lamar Jackson that the league has never seen before. Though the Ravens have lost two games so far this season, they are beginning to look unstoppable.

Baltimore is on a nine-game winning streak in which it has faced one of the toughest slates imaginable. In that time, it’s beaten potential playoff teams like the Steelers, Seahawks, Patriots, Texans, Rams, 49ers, and Bills.

The Jets have managed five wins to date, but their rare victories have come against some of the NFL’s worst competition. New York has beaten fellow bottom feeders like the Redskins, Dolphins, and Giants, accomplishing little else besides playing themselves out of a top draft pick.

No one is expecting this game to be close, but it could be even more embarrassing for the Jets than it looks if the Ravens put their foot on the gas. If there is a bright side for Jets fans it is that another loss could improve their draft position as they look toward plugging up one of the weakest rosters in the league.

Here’s everything you need to know to live stream Ravens vs. Jets, including what to watch for on the field.

How to watch Ravens vs. Jets online

Ravens vs. Jets stream: What to watch for

The Baltimore Ravens seem destined for the Super Bowl in the weaker-than-usual AFC. The Patriots’ lack of offense is finally catching up with them. The Chiefs and Texans can score points, but weaker defenses have kept them looking mortal. The only teams that are playing on the same level as the Ravens right now are in the NFC. Baltimore won’t have to worry about a team like the Saints, 49ers, or Seahawks until the Super Bowl.

Though the Ravens running game gets most of the attention, the passing game has come into its own in recent weeks. This team put up 45 points against the Rams and 41 points against the Texans. Jackson has found a great rhythm with tight ends Hayden Hurst and Mark Andrews while rookie receiver breakout Marquise “Hollywood” Brown is a weapon who can stretch the field.

Baltimore’s defense has also come into its own. The linebackers and cornerbacks on this team have been particularly effective. In a tough game against Buffalo last week, the Ravens got great effort from Matt Judon, Marlon Humphrey, Jimmy Smith, Marcus Peters, L.J. Fort, and Josh Bynes.

Even when the Jets win, they aren’t particularly exciting and few players stand out. In a narrow win against the Dolphins, their leading offensive weapons were Bilal Powell and Robby Anderson. Against the very sackable Ryan Fitzpatrick, the depleted defenses didn’t do much. Only Jordan Jenkins got to the QB in an unimpressive defensive showing.

Baltimore ought to win in a route barring an act of God as the Ravens continue to refine their game in preparation for a Super Bowl run.