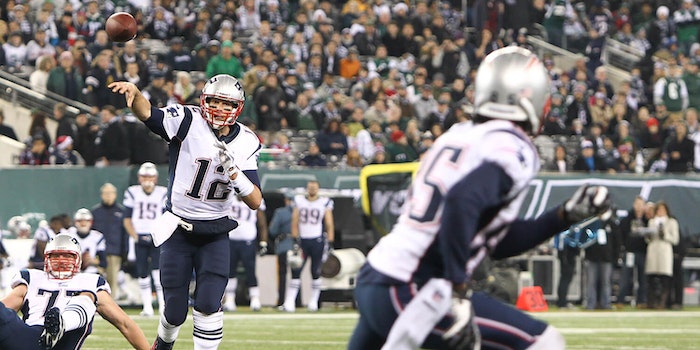 How to stream Patriots vs. Jets on Monday Night Football

Can a resurgent Sam Darnold threaten an undefeated Patriots squad?

It’s strange to say, but the New York Jets might have the best offense that the New England Patriots have faced all year.

Before Sam Darnold came back, the Jets seemed like they were cruising for a top-three pick in next year’s draft. Now, they look like they can compete against any team in the league.

In a thorough beating of the Cowboys last week, the Jets looked like a different team. Sam Darnold threw for 338 yards, aided by star turns from Robby Anderson and Le’Veon Bell.

While this is not a top defensive unit by any stretch of the imagination, when Jamal Adams is playing as well as he was last week, he takes the Jets D to another level. Adams had 9 tackles and an amazing play to halt what would have been a game-changing two-point conversion against Dallas.

Of course, the Jets have a tall order ahead of them here. The Patriots may be the best team in football, and stand with the San Francisco 49ers as the final undefeated teams.

New England’s defense is having an amazing season. They were number one in defensive DVOA heading into last week, and shouldn’t move much following a dominant performance against the Giants.

The Pats offense has struggled despite all of those victories. Wide receivers on this team seem cursed, as Phillip Dorsett and Josh Gordon have become the latest to fall to injuries.

The running game has been bland in New England. As usual, they feature a rotating cast of characters in the backfield who likely wouldn’t start elsewhere.

On top of the poor production, Tom Brady is taking more sacks than usual. It hasn’t been anything out of hand, but Brady is old and protecting him ought to be a priority in New England.

Since the Jets played well last week and the Patriots have faced weak competition, it is tempting to say there could be an upset here. But, the Pats have just been too good, and the Jets will need to see consistent play from Darnold following his lengthy time on the bench. Though the game could be competitive for stretches, this is not a matchup of equals.

Look for a Pats win here, but it could be closer than expected.

Patriots vs. Jets live stream: How to watch MNF online

Julian Edelman, Wide Receiver: As no other quality receivers seem to be able to stay healthy and the running game is filled with also-ran runners, Edelman remains the only dependable option in Pats offense that spreads the ball all over the place.

Le’Veon Bell, Running Back: Despite their stout defense, you can run on this New England team. Look for solid production from Bell even if Darnold gets rattled and some of his receivers disappear.

New England Patriots vs. New York Jets: Why it matters

No, this game won’t likely change the AFC East standings very much, but this is a meaningful game for both teams.

The more wins the Pats can stack before a high-powered offense outguns them, the better. New England shouldn’t lose this game, and an upset would shorten the distance between them and other top AFC teams like the Texans and Chiefs.

For the Jets, a win here would be huge. The playoffs may be out of reach at this point, but a solid back half of the season could mean that Darnold and this coaching staff will get a chance to make some improvements and try again next year. If New York implodes with Darnold back in the line-up, then we could expect bigger offseason changes in the Meadowlands.

Expect a Patriots win on Monday, but don’t be surprised if it ends up a close one.