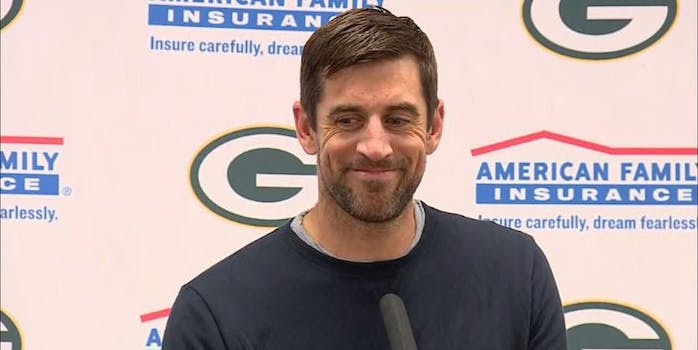 How to stream Packers vs. Lions on Monday Night Football

The top two teams in a wide-open NFC North face off in prime time.

The NFC North might be the best division in football. On Monday its two best teams, the Green Bay Packers and the Detroit Lions, will go head-to-head.

The Packers have had one of the strongest starts in the NFL. With an impressive win against the Cowboys last week and just two losses, to the Chiefs and Eagles, they look like one of the league’s best teams. Then, the Lions sit just behind the Packers in the standings. They are one of the few remaining one-loss teams: They also lost to the Chiefs before their bye.

Green Bay’s Aaron Jones is coming off of a career game. The running back scored four touchdowns and was the team’s leading receiver and rusher with almost 200 total yards. While quarterback Aaron Rodgers started a little slow as he adjusted to a new offensive scheme, the attack is rounding into form in Green Bay.

The Packers have also been one of the league’s best defensive units. Preston Smith and Za’Darius Smith continue to lead this strong D: Last week they combined for three sacks. Green Bay’s defense also picked off Dak Prescott three times.

However, Detroit is right there with Green Bay in terms defensive performance. The Lions and Packers were neck-and-neck in DVOA rankings at the end of Week 4. Even during a loss to the Chiefs, the Lions got to Patrick Mahomes four times.

Detroit’s running game has been hit and miss, despite Kerryon Johnson’s monster game in Week 4. While Kenny Golladay has emerged as a top receiving threat, there have also been up and down weeks in the passing game.

Similarly, there are pros and cons on the Lions defense. While the secondary has played very well, up front they have allowed over 100 yards rushing during every game so far.

Despite bright spots like Golladay’s continued development at receiver and the secondary’s stellar play, this Detroit team has been good but not great so far. The Packers have the personnel advantage during what could be a close game.

Yes, they are weak at receiver, but so far Rodgers has found a way to pile up yards and stack wins for the Pack.

Aaron Jones, Running Back: It doesn’t take a genius to recommend you start the guy who had four touchdowns last week. But with a strong Detroit secondary, a weak Lions run defense, and an unreliable Packers receiving corps, this fantasy matchup is the one you want.

Kenny Golladay, Wide Receiver: When you take out an off game against the Eagles, Golladay has been good for 50 yards and a touchdown every week. He should do well here, even if this is a strong pass defense. While Kerryon Johnson had a monster game against the Chiefs, he hasn’t broken 50 yards on the ground previously, so Golladay remains the safe choice in Detroit.

Green Bay Packers vs. Detroit Lions: Why it matters

Every team in the NFC North is still in contention. The Vikings, who just dismantled the Giants, are currently last place in the division. Every division game is going to matter when it comes to the playoff picture. Wild-card berths are going to be hard to come by in this conference, so every game matters.

The Lions and Packers have some of the same strengths and weaknesses. Both teams have a nice pass defense and a quarterbacks who can sling the ball. Both squads have struggled to stop the run but have also been inconsistent on the ground themselves.

Overall, the edge goes to the Packers, who have a little stronger defense and Aaron Rodgers throwing the ball. That being said, this game could demonstrate just how competitive this NFC North division is, with four teams who could go out and win any game on their schedule.