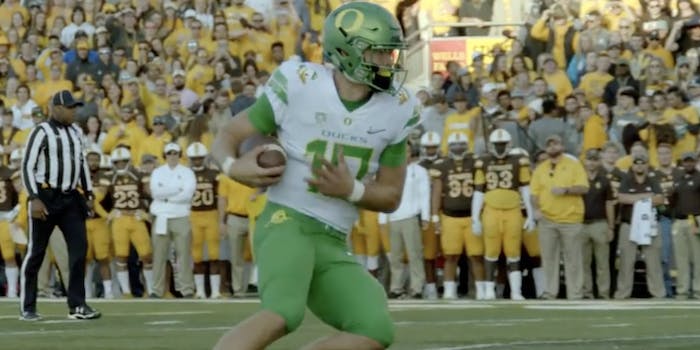 Oregon vs. Utah: How to stream the Pac-12 championship

Utah ranks third nationally in both total and scoring defense.

Huntley has thrown for 2,773 yards and 16 TDs with two interceptions. Doak Walker Award semifinalist Moss leads the Utes with 1,246 yards and 15 TDs on the year.

The Ducks defense allowed 41 total points over the past two weeks in their costly loss two weeks ago against Arizona State and Oregon State. Their defensive woes, especially along the line, will need to be fixed by Friday, as the Utes’ 23rd-ranked rushing defense will apply significant pressure to whatever plans Oregon has to control the line of scrimmage.

For the first time in years, the Pac-12 is in the national title picture. Here’s how to stream tonight’s high-profile action.

How to stream Utah vs. Oregon live: Watch Pac-12 football

Utah vs. Oregon: What to watch for

An interesting stat arises when you investigate Utah’s defensive statistics. As mentioned above, the Utes rank third in both total and scoring defense. The two teams ranked ahead of them in total defense–Ohio State and Clemson–also rank in the top five in tackles for loss. The Utes are 69th in the country, which could suggest a lack of explosion. However, it actually suggests a rare sturdiness and consistency.

For Oregon to have a shot, Herbert has to play up to his talent and withstand Utah’s swarming pressure, especially up the middle from Bradlee Anae, who’s seventh on the country in sacks (12.5.) Sophomore left tackle Penei Sewell will need to be up to the task.

Holding the chalk line, Utah is a 6.5-point favorite, according to Odds Shark. Expect the Utes to try and muscle Oregon off both sides of the ball.