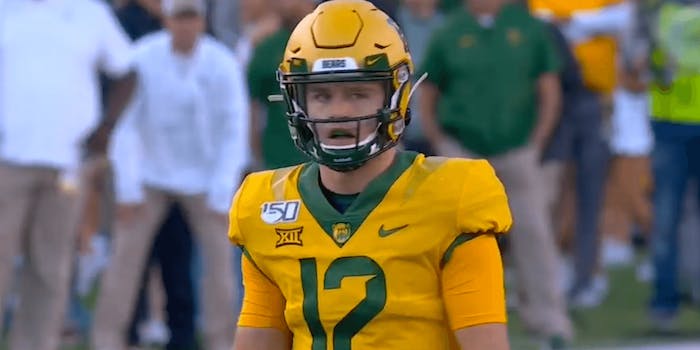 Baylor vs. Oklahoma: How to stream the Big 12 Championship

Will Baylor stake its claim as the Big 12's new beast?

The Bears continued to look dominant in the 61-6 win over the Kansas Jayhawks. Running back JaMycal Hasty gained 92 yards and three touchdowns on just 14 carries. QB Charlie Brewer went for 182 yards, throwing one touchdown and a pick. The Bears nearly doubled up the Jayhawks in total yardage, 507 to 258. Baylor had 264 rushing yards in the game, and its defense allowed just 142 yards and forced six turnovers.

The Sooners reached 11 wins after securing a 34-16 victory over Oklahoma State, guided on offense by running back Kennedy Brooks, who rushed for 160 yards on 22 carries and a touchdown. Jalen Hurts compiled 224 total yards with two scores. Oklahoma, though, gave up 355 yards, including 104 rushing yards to NCAA leading rusher Chuba Hubbard.

Oklahoma tops the nation in total offense (564.3 yards per game) and will test Baylor’s 39th-ranked defense in the Big 12 Championship. Without question, Baylor’s attention will be on Hurts, who’s been spectacular in Lincoln Riley’s offense. He’s gone for 3,347 passing yards and 1,217 rushing yards with 49 total scores.

Baylor, though, is not without a clue as to how to stop the Big 12’s giant. In its 34-31 loss to the Sooners early this season, the Bears were up 28-3 before Hurts went wild and charged Oklahoma back.

No. 7 Baylor Bears vs No. 6 Oklahoma Sooners: Big 12 Championship

How to stream Baylor vs. Oklahoma live: Watch Big 12 football

Baylor vs. Oklahoma: What to watch for in the Big 12 Championship

In the second half of their first matchup, Baylor went three-and-out on three consecutive occasions. Then Brewer threw an awful interception on the Oklahoma 40 to end the game. It’s a tale of two halves: good Charlie Brewer, bad Charlie Brewer. Baylor needs the former.

Additionally, head coach Matt Rhule will need to get creative to effectively rush the football, or use short passes to augment or simulate a rushing game. Kansas State’s win over the Sooners shines some light: The Wildcats gained a total of 426 yards. The split is important: 213 passing and 213 rushing.

Holding the chalk line, Oklahoma is a 9-point favorite, according to Odds Shark. Expect another close matchup in the Big 12 Championship. It will come down, again, to consistency in the run game.