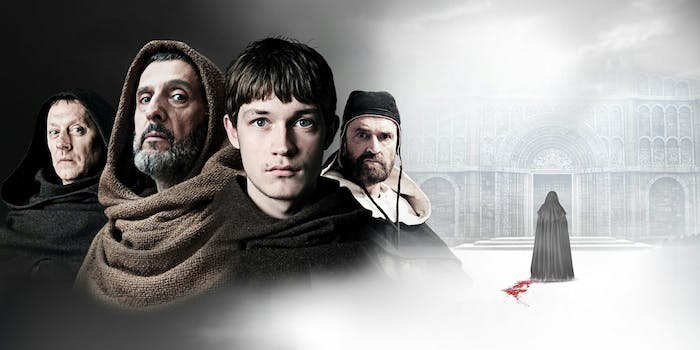 How to watch ‘The Name of the Rose’ for free

A murder mystery gets medieval.

Murder. Palace intrigue. Feudalism. No, this isn’t another secret season of Game of Thrones, but it might fill the Westeros-sized hole in your heart and television schedule. The Name of the Rose is the miniseries adaptation of the classic 1980 Umberto Eco novel of the same name. The story is a historical murder mystery set in 1327 Italy.

Franciscan Friar William of Baskerville is tasked with solving a chain of unusual deaths in an isolated Benedictine abbey. William must solve the case with his faithful apprentice while dodging the aims of a, particularly wrathful inquisitor. The series is a study in semiotics, medieval studies, and biblical analysis.

The Name of the Rose has been adapted before, but SundanceTV is fleshing out the novel into eight episodes, so no detail, character, or subtlety is left out of the incredibly lofty novel’s adaptation, and it features John Turturro in the starring role no less.

Here’s everything you need to know to watch The Name of the Rose online for free.

The Name of the Rose cast

What channel is The Name of the Rose on?

The Name of the Rose is a CBC production that will air on SundanceTV in the U.S.

When does The Name of the Rose air?

The Name of the Rose premieres Thursday, May 23 at 10pm ET. New episodes will air weekly on Thursdays at the same time.

How to watch The Name of the Rose online for free

SundanceTV may be a deep cable cut, but you can also watch it through all of the streaming services featured below. It may not be available in basic packages, but each listing will let you know exactly how to add SundanceTV to your channel package. No matter which service you choose, you’ll start with a one-week trial, letting you watch The Name of the Rose online for free.

For a more à la carte service, look to Sling TV. It offers two cable packages, Sling Orange and Sling Blue, both of which cost $30 per month. If you grab them both (Sling Orange + Blue) you can save $10 per month. Sling Blue offers more bang for your buck with over 40 channels, including sports necessities like FS1, NBCSN, and NFL Network. You’ll also gain access to the usual cable mainstays like Food Network, Discovery, Cartoon Network, SYFY, and FXX. To gain access to SundanceTV, you’ll need to opt in at $5 a month for the Hollywood Extra package, which also includes Reelz, Fandor Festival, TCM, Cinemoi, the Film Detective, and HDNet Movies. Here’s the complete guide to Sling TV channels.

Philo is the least expensive streaming service, but it has some limitations. You won’t find the sports channels that dominate other packages or local channels. However, it’s the cheapest way to gain access to SundanceTV at only $16 a month. You will also find the best deal on popular channels like Animal Planet, IFC, AMC, Lifetime, and even deep cuts like ID. You also get free cloud DVR, but shows recorded are deleted after 30 days, so binge responsibly.

FuboTV was built from the ground up with sports fans in mind. There are different channel packages available whether you’re looking for basketball, soccer, golf, and even outdoor sports like rock climbing. But no worries, all the great cable channels you’re after are present too, including Viceland, Bravo, TBS, and IFC. Here’s the complete FuboTV channels list and our comprehensive FuboTV review.)

Other ways to watch The Name of the Rose online free

If you’re not up to subscribe to a live streaming service, you can buy the entire miniseries on Amazon for $19.99 and watch the episodes as they air.

Sundance Now is the on-demand streaming service for SundanceTV fans. Once you subscribe, you’ll gain access to all the prestige TV drama, true crime miniseries, and great documentaries the channel is known for. And because it’s Sundance, there are countless films to watch including Django Unchained, Amour, and Big Fan.

Behind-the-scenes extras for The Name of the Rose are available on the official SundanceTV website.