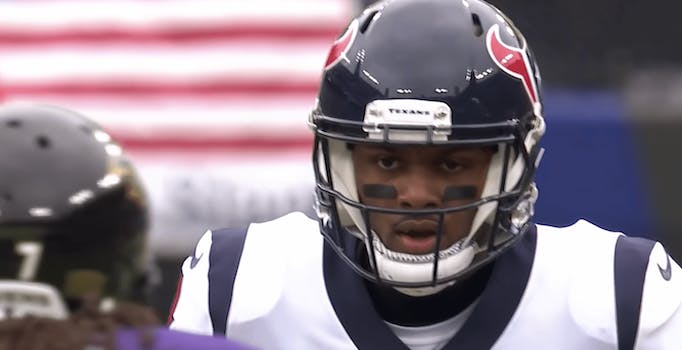 How to stream Colts vs. Texans on Thursday Night Football

These strong but uneven AFC South teams face off for first place.

While the Indianapolis Colts and the Houston Texans have had strong performances this season, they have both struggled to establish themselves as elite teams.

Though Deshaun Watson has had an amazing statistical year, some bad decision making, a weaker running game, and so-so defense has kept this Texans team from achieving divisional dominance. The loss of J.J. Watt for the season hasn’t made things easier for a defense that isn’t having its best year.

Injuries have hampered Indy throughout the season on both sides of the ball. Just as the team gets quarterback Jacoby Brissett back at full strength, the Colts may lose breakout runner Marlon Mack for a number of weeks.

At least one of these teams will make the playoffs, and in an unusually weak AFC, both of these teams still have a decent shot at making the postseason. Here’s everything you need to know to live stream Colts vs. Texans, including what to watch for on the field.

How to watch Colts vs. Texans online

Colts vs. Texans stream: Why it matters

After getting demolished by the Ravens last week, the Texans proved once again they aren’t quite in the top tier of the AFC with teams like the Patriots and Ravens. Though the team has had a good season, they have lost some winnable games and have had some embarrassing defeats.

However, the Texans have had some statement victories. Their 53-point day against the Falcons comes to mind, as do victories over the Chiefs and Raiders. It’s hard to tell which Houston team is going to show up from week to week.

Though the passing game can be inconsistent, the varying performance of this team has a lot to do with the defense. This 18th-ranked unit by DVOA tends to hold bad teams to low scores while better teams like the Ravens, Colts, and Saints have had their way with them.

When the defense is playing poorly, Houston tends to get into shootouts. Though Duke Johnson and Carlos Hyde have been serviceable running backs, they aren’t all-stars. This means that the Texans have trouble slowing the game to a grind and keeping their weak D off the field.

Luckily for Houston, the Colts have problems of their own. Yes, they got a much-needed win against the Jaguars last week, but before that, they lost the Dolphins and Steelers in consecutive weeks, and almost dropped a game to Denver.

The running game in Indy has kept the Colts in it. Last week marked one of the most dominant rushing performances of the year for the Colts, as Marlon Mack and Jonathan Williams both went over 100 yards. When the running game can’t get going, Indy has trouble winning, as Brissett is not a great passer. With Mack ruled out for this game, the Colts will need Williams to repeat his breakout week if they want to win.

The Colts have exceeded expectations this year. A lot of that has to do with a defense that has quietly crept into the top 10 in defensive DVOA. In recent weeks, players like cornerback Kenny Moore and defensive end Justin Houston, have helped get this D in shape.

Despite the improved Indy D, we like the Texans to bounce back in this game, but don’t be surprised if this is a close game. With a limited running game and a bad O-line, Brissett hasn’t been handed the best situation to find success after being sidelined for weeks. It may be too soon for him to win a shootout against the Texans. The Indy D may limit Deshaun Watson, but he still has the edge here with all of his offensive weapons in the game.