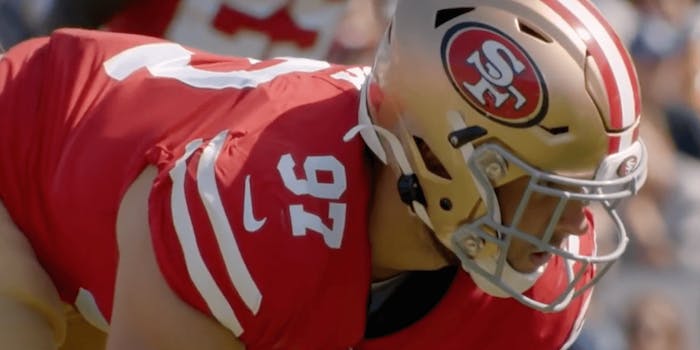 NFL Playoffs: How to stream Vikings vs. 49ers live

The second weekend of the 2019 NFL Playoffs will open with the upset-minded Minnesota Vikings visiting the NFC West-winning San Francisco 49ers in Saturday’s early game.

A healthy Dalvin Cook and Adam Thielen made the Minnesota Vikings looked like a completely different team than the one that finished the regular season. They were both instrumental in the Vikings’ surprise 26-20 overtime win over the Saints last weekend.

After missing the two previous games with a shoulder injury, Cook came back fresh, rushing a season-high 28 times for 94 yards and two touchdowns. Thielen, just returning from a hamstring injury, grabbed seven receptions for 129 yards and stunned the Saints secondary by catching a deep Kirk Cousins dime, which set up the game-winner to tight end Kyle Rudolph.

Cousins played arguably the best half of football in his career in the second half, leading the efficient Vikings offense to converted 10 of- 8 third downs and TDs on three of four red zone trips.

The 49ers, meanwhile, come in rested and ready. Whatever flaws might exist for the Niners are mitigated with the returns of defensive end Dee Ford, who had a hamstring injury, and linebacker Kwon Alexander, who missed eight games with a torn pec muscle.

Of course, the main matchup advantage for the 49ers offensively will be All-Pro tight end George Kittle (85 catches, 1,053 yards, 5 touchdowns), against whoever in the Vikings secondary tries to cover him.

Here’s everything you need to know to live stream Vikings vs. Niners, including what to watch for on the field.

Vikings vs. Niners live stream: How to watch the NFL Playoffs online

This game will be on NBC and is viewable via the following streaming services.

San Francisco 49ers quarterback Jimmy Garoppolo had solid numbers in the regular season (329-476, 3,978 yards, 27 touchdowns, 13 interceptions), but how will he fare in the playoffs? This will be his first post-season start. He’s only had two snaps of mop-up duty in one playoff game in his career, when he was still backing up Tom Brady in New England.

“I’ve been a part of some playoff games and seen the atmosphere of the building ramp up, the atmosphere of the coaches, players, everyone,” said the former Patriot in a Friday press conference. “Obviously being the starter and backup is a little different. Yeah, I’m trying to prepare the same I have this whole season, treat this week, just go through my routine and everything like that like I normally do. Yeah, like I said before, the energy I think, especially on Saturday in that stadium, will be pretty special.”