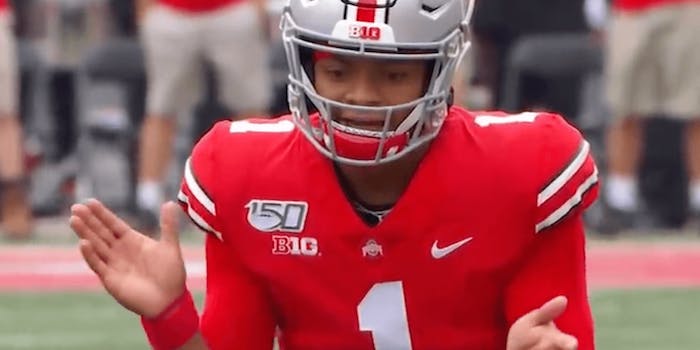 Ohio State vs. Michigan: How to stream ‘the Game’

In arguably the greatest rivalry in college football today, No. 1 Ohio State Buckeyes (11-0, 8-0 Big Ten) travels to take on the No. 13 Michigan Wolverines (9-2, 6-2) in “the Game,” at Michigan Stadium, in Ann Arbor, Michigan on Saturday.

The dominant Buckeyes survived their first real test and improved to 11-0 following a hard-fought 28-17 victory over Penn State on Saturday. Star back J.K. Dobbins produced 157 yards rushing and two touchdowns. The current top seed in the College Football Playoff also won the Big Ten East title. Defensive end Chase Young, the country’s best defensive player, has 16 sacks and six forced fumbles this season. He had three sacks, four tackles for loss, and a forced fumble in a 28-17 win over Penn State last weekend after serving a two-game NCAA suspension for receiving (and repaying) a small loan.

Michigan has shown tremendous grit after moving to 9-2 after a 39-14 victory over Indiana. Quarterback Shea Patterson continued to show improvement, leading the way with five TD passes. After a rough beginning to their season, head coach Jim Harbaugh’s club has reeled off four consecutive wins.

Even if Michigan manages to beat Ohio State, it will remain behind the Buckeyes in the East. However, the Wolverines can lock themselves into a New Year’s Six and create some chaos in the larger playoff picture.

Ohio State vs. Michigan: What to watch for

The key will be the same as usual with when Chase Young is involved–can Michigan stop the Ohio State standout?

If Young lives in the backfield, it will mean the Wolverines are being suffocated, and they will be blown out. Harbaugh has to keep Patterson–12 TD passes and just one interception in his last four games–upright to have any chance. Running backs Zach Charbonnet and Hassan Haskins will need to punish Ohio State’s aggressiveness and keep Young and company back on their heels.

Holding the chalk line, Ohio State is an 8.5-point favorite on the road, according to Odds Shark. Expect a dogfight, but Ohio State is the more talented team and should wear Michigan down.