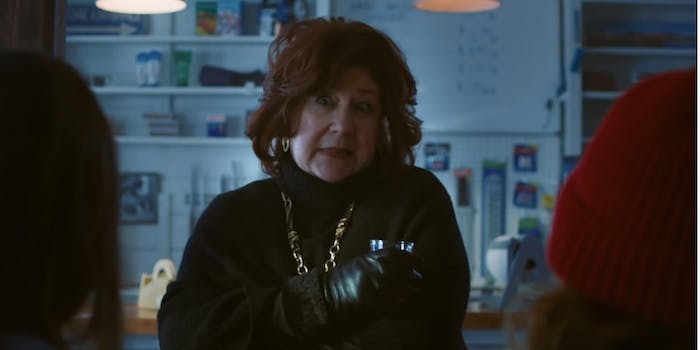 From 'Blow the Man Down' to 'The Vast of Night,' here's what to watch this week.

As more films are forced to skip theatrical release and head straight to video on demand, Amazon’s selection of new movies has filled out quite a bit. If you want to rent a new release, you’ll pay a price. But if you’re an Amazon Prime subscriber, finding a good new movie can take a little more legwork.

If you’re looking for new movies that perhaps you missed in theaters, or an Amazon original title, here’s a list of the new movies on Amazon Prime you should watch.

1) Blow the Man Down

Danielle Krudy and Bridget Savage Cole’s debut film concerns murders in a small Maine fishing town and focuses on the women who live there. Two sisters, Priscilla and Mary Beth, have just lost their mother and are trying to figure out what to do with their lives. That leads Mary Beth to the company of a possible serial killer, which leads to a dead body with a harpoon in it. Margo Martindale plays the madam of a local brothel; Annette O’Toole, Marceline Hugot, and Jane Squibb are the town’s peanut gallery. Blow the Man Down is a murder mystery but, more deeply, an exploration of a town’s history, as seen and shaped by women. —Audra Schroeder

Ari Aster’s Hereditary follow-up had a lot of couples rethinking their relationships in the summer of 2019. After a horrific loss, Dani (Florence Pugh) decides to tag along with her clueless boyfriend (Jack Reynor) and his bros to Sweden, where a remote village promises a performance of a folkloric tradition—and possibly some relief for Dani. But Aster doesn’t let things feel safe for long, plunging into aesthetically drenched depictions of entitlement, grief, and sexuality. —Audra Schroeder

3) The Vast of Night

There are plenty of small-town alien movies, but Andrew Patterson sets his apart by setting the scene. Everett (Jake Horowitz) and Fay (Sierra McCormick) are two high school pals in a small New Mexico town who discover strange signals and frequencies coming through the local switchboard (it’s the 1950s). But The Vast of Night isn’t so much about the big alien reveal as it is how the people in this small town connect and engage around the existence of otherworldly life. —Audra Schroeder

Lulu Wang’s 2019 film managed to beat Avengers: Endgame at the box office, and that’s not its only feat. Awkwafina leads the film as Billi, an aspiring writer whose life is uprooted when her grandmother is diagnosed with cancer and her family travels to China to say goodbye (under the guise of a wedding). It’s inspired by Wang’s own story of familial secrecy, which only adds to the emotional narrative, one that explores a generational and cultural divide as well as the comedy therein. —Audra Schroeder

Adam Driver plays a senate staffer in this informative docudrama about the investigation into CIA torture methods after 9/11. Stonewalled by politicians and sabotaged by the CIA, he struggles to bring the truth to light. Following in the footsteps of films like All the President’s Men, it’s a straightforward and conventional political drama that’s ultimately more educational than exciting to watch, shining light on one of the darkest periods of the War on Terror. —Gavia Baker-Whitelaw

6) Fighting with My Family

Directed by Stephen Merchant, Fighting with My Family follows a wrestling family—loosely based on British wrestler Paige’s—as sister and brother Raya and Zak (Florence Pugh and Jack Lowden) try out for the WWE. Pugh as Raya is a thrill to watch, especially up against the other women picked for the team. It’s a feel-good underdog movie, but it’s also self-aware (see: The Rock). —Audra Schroeder

Director Robert Eggers (The Witch) delivers another unique historical drama, this time geared more toward comedy and psychodrama than horror. Robert Pattinson and Willem Dafoe star as a pair of 19th century lighthouse keepers trapped together on a small, stormy island, driving each other slowly mad. Filmed in black and white using vintage hardware and camera techniques, The Lighthouse is both artistically distinctive and enormously entertaining. With gripping and hilarious performances from both leads, this film is guaranteed to inspire cultish devotion. —Gavia Baker-Whitelaw

Shia LaBeouf plays his father in Alma Har’el’s dark, blissful Honey Boy. It’s an autobiographical retelling of LaBeouf’s childhood as a TV star (portrayed by Noah Jupe) and time spent in rehab (played by Lucas Hedges), and while certainly a revisionist project, LaBeouf and his alter egos make it an effective and moving one. —Audra Schroeder

Imogen Poots and Jesse Eisenberg star as a young couple in this indie sci-fi/horror flick, turning a quiet suburban neighborhood into a surreal nightmare. After visiting a potential new home, the two characters find themselves trapped in an eery housing development that feels like an Uncanny Valley facsimile of the real world. Playing like a feature-length episode of The Twilight Zone, Vivarium is funny yet satisfyingly unsettling. —Gavia Baker-Whitelaw