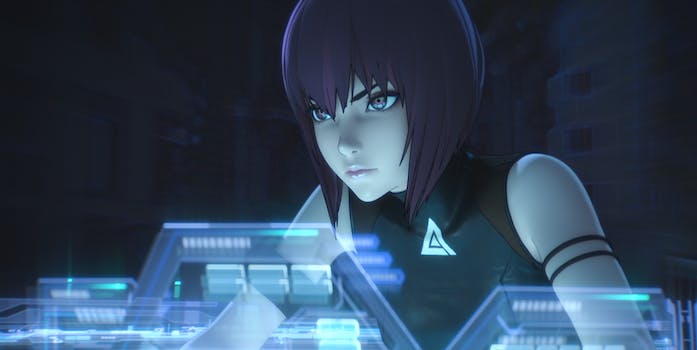 Review: ‘Ghost in the Shell: SAC_2045’ is heavy on action, light on big ideas

Major's new look in the Netflix series is also... not great.

Ghost in the Shell: SAC_2045 is the latest anime addition to the renowned Ghost in the Shell franchise. Based on a manga of the same name penned by Masamune Shirow, Ghost in the Shell is one of the seminal science fiction/cyberpunk franchises and is praised for its influential thoughts on identity and self in proximity to technology. It has also influenced other major cultural watershed moments, like the Matrix universe. If you’ve only seen the breakout 1995 movie directed by Mamoru Oshii, then know that SAC_2045 picks up after the Ghost in the Shell: Stand Alone Complex TV series, which goes down a pretty different path from the 1995 movie and original manga.

RELEASE DATE: April 23, 2020
DIRECTORS: Kenji Kamiyama and Shinji Aramaki
STREAMING: Netflix
‘Ghost in the Shell: SAC_2045’ has an intriguing premise and the ambition to tackle big ideas about society and the internet, but it doesn’t quite manage to make the time to say anything new or insightful.

SAC_2045 already generated quite a bit of buzz before its release, mainly for the show’s striking 3DCG redesign of the franchise’s cyborg female protagonist, Major, also known as Motoko Kusanagi. It’s always a gamble to radically change an iconic character’s look, and in this case, Major’s new appearance feels like a major downgrade from the 1995 movie. (The only other worse downgrade is Scarlett Johansson playing Major in a horrible live-action Ghost in the Shell adaptation.)

The 1995 Major as we know her is a beefy, brooding, and incredibly sexy delight. Unfortunately, she’s way less beefy in this 2020 show and looks rather uncomfortably young. While I thought the 3DCG animation worked well in action scenes, even though everything had an uncomfortable fake plastic sheen, from people to inanimate objects, there was a noticeable real laziness in female character designs. How does Major, a military trained full-body cyborg, and Purin, a data scientist/Batou groupie, literally have the same body and face? One does active combat all the time, and the other does sedentary data stuff in a lab!

But aside from the less-than-satisfactory change in character design, the real question is, does the plot of the new anime hold up to the Ghost in the Shell legacy? Unfortunately, it’s also a less-than-satisfactory experience as well. If the 1995 Ghost in the Shell movie was revolutionary in the way it thought about the future of human consciousness and its proximity to technology, then SAC_2045 is similarly ambitious, but fit alls short of saying anything insightful about the modern plugged-in condition.

For the first few episodes of SAC_2045, the show is a little too Bourne-esque, with more of an emphasis on explosive action scenes than the interesting philosophical big questions that define Ghost in the Shell’s appeal. More time showing and exploring the fascinating political context that becomes more important later in the show would’ve been appreciated. In SAC_2045, Major and her crew start out as a mercenary group participating in the “Sustainable War.” The “Sustainable War” is basically endless war thanks to four superpowers, U.S., Russia, China, and the EU.

These big empires have found a way to profit from off-shore wars and have decided it’s in their best economic interest to keep such conflict perpetual. It’s not a far cry from reality–the United States has a sordid history of getting involved or starting wars for its own benefit. See the U.S.’s involvement in violent regime changes in Latin America. Another important political event in the show is the “Global Simultaneous Default” that made currency almost useless and destroyed the savings of working-class people–so in other words, a fictional equivalent to what the Great Recession in 2008 did to people.

Against the backdrop of this complicated and extremely poignant political situation, Major and her team later become in charge of capturing “Posthumans”—humans with cybernetic brains that have somehow evolved into another type of existence. They’re highly intelligent and possess an almost god-like control of technology and networks, and seem to take actions that directly go against the Sustainable War. Through the actions of “Posthumans,” SAC_2045 examines modern-day inequalities and relationships to the internet, of which includes a literal technological manifestation of cancel culture in the show. Ideas of surveillance and freedom are also explored, and George Orwell’s dystopian 1984 is heavily referenced.

But unfortunately, none of the philosophical contemplations and examinations of people’s relationship to technology feel particularly revolutionary or insightful. Other than a “Posthuman” kid getting really into 1984 and making some bad decisions based off of grief and the book’s ideas, Orwellian ideas of surveillance aren’t quite unpacked or pushed in an interesting direction.

Ostensibly too, the show wants to make a commentary on the Sustainable War and socioeconomic policies that disadvantage the working class. The United States is rightly showcased in SAC_2045 for its greed and self-centered global policies that place the U.S. first at the expense of everybody else. (Admittedly, to an almost over-the-top degree. This show was a game of spot the American Hollywood stereotypes—see if you can find the all-American quarterbacks, cowboy aesthetics, and an NSA agent literally named John Smith.)

But what feels uncomfortable and missing, respectively, is the show’s simultaneous positioning of Japan as the underdog and lack of acknowledgement of Japan’s own history of imperialism and colonialism. If SAC_2045 wants to examine the power-that-be, the evil forces that have led to “Sustainable Wars” and the ills of empire building, then not talking about Japan’s own complicity feels wrong. And the show is definitely championing Japan as the underdog in its chaotic world order–the white prime minister of Japan who aims to preserve Japan’s independence and legacy gets a positive limelight, which I really don’t know how to feel about that. Lots to unpack there that I can’t do in this review!

SAC_2045 has an intriguing premise and the ambition to tackle big ideas about society and the internet, but it doesn’t manage to say anything new or insightful. There are glimmers of great ideas and daring premises, but none get their due. Action scenes bloat the first half of the series, and the actual stuff about “Posthumans” and big picture ideas doesn’t pick up until the latter half, and unfortunately, gets abruptly cut off by the end of the series before true momentum can be reached. SAC_2045 is clearly set up for a season 2, at least judging by how season 1 ended on a cliffhanger, and here’s to hoping there’s a little less fighting and a little more thought in the next installment.