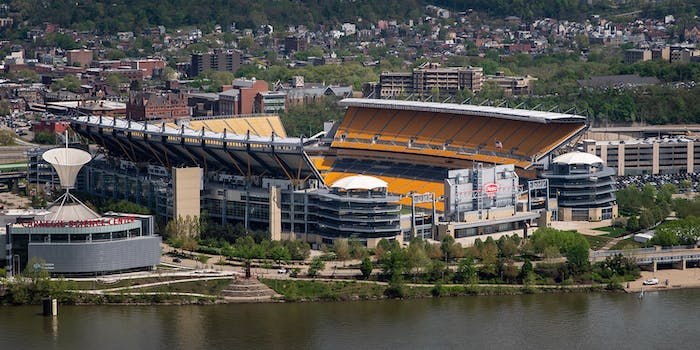 How to stream Steelers vs. Dolphins on Monday Night Football

They should really flex more games out of primetime.

If you look at the Pittsburgh Steelers and the Miami Dolphins, you see two teams that probably aren’t going anywhere. The Steelers faithful had a faint hope that the AFC North would be so bad that they could squeak into the playoffs, but with the Ravens’ smack down of the Seahawks last week, that dream seems dead.

In the two games the Steelers have won, the formula has been pressuring the quarterback and forcing turnovers. This young Steelers defense, with the likes of Devin Bush, Minkah Fitzpatrick, and T.J. Watt, looks like a very good unit that will continue to grow for years to come.

When things go right for Pittsburgh, they can win games with their defense. In Week 6, we saw what that looks like as Bush had seven tackles, an interception and a fumble recovery which he returned nine yards for the touchdown. While the Steelers entered their bye at number 9 in Defensive DVOA, they feel like a unit that could swing any game at any time. They feel dangerous.

The Dolphins aren’t scaring anybody. The worst team in football is still winless as we approach the halfway point of the season. One of its best players at the start the season, Minkah Fitzpatrick, is now a Steeler. Miami may have even fewer talented players as they approach the October 29th trade deadline, as they are clearly approaching this as a lost season.

Quarterback Ryan Fitzpatrick does give this team a better chance to win than Josh Rosen did, and Fitzpatrick is probably a more competent quarterback than the Steelers’ Mason Rudolph. While Fitzpatrick might throw picks, he can lob the kind of deep ball we haven’t yet seen from Rudolph.

There could be some FitzMagic left in the tank, but this Miami team is so talent poor that the QB would need one of his best games in memory to beat this mediocre Steelers squad. If the Dolphins turn the ball over, this game could be over in short order.

Barring a catastrophic offensive game from Pittsburgh, expect the Steelers to win here.

Steelers vs. Dolphins live stream: How to watch MNF online

Defense/Special Teams: This has been a high scoring fantasy defense in recent weeks, thanks to the turnover-hungry ball-hawking that has been the hallmark of this unit. And you couldn’t wish for a better matchup.

No One: Don’t even think about it. Just don’t do it. Rumor has it Kenyan Drake could even be traded by Monday Night. Just awful.

Pittsburgh Steelers vs. Miami Dolphins: Why it matters

If the Steelers have a prayer of catching the Baltimore Ravens, they need to win here. Already two games behind, and running a far less ambitious offense than Greg Roman has stampeding in Baltimore, this feels like a reach. If this weak passing attack loses to any more bad teams, they can start thinking about next year.

Pittsburgh has played hungry though, and look for more of the same here. With good coaching and a tough defense, the Steelers should keep beating up on bad teams, gutting their way to maybe as many as eight wins.

Miami has played like a team that is tanking. Which they are. While they may win a game or so (look for the Bengals matchup in Week 15), this probably isn’t it. If Fitzpatrick has a great day and the Steelers just can’t get to him, which seems highly unlikely, this could be competitive. But that probably won’t happen.

Look for the Steelers to keep hope alive for one more week as the defense dines on seafood all game long.